While the news of an esteemed filmmaker producing a period piece heavily influenced by their own childhood and upbringing isn’t anything new, writer-director James Gray’s Armageddon Time is packed with enough passion, poignancy, and modern relevancy to set itself apart. Even though lots of the themes and situations explored in Armageddon Time have been the bedrock of countless coming of age films before it, Gray uses his mastery of tone and slow burn plotting to maximum effectiveness. When Armageddon Time first ended, I wondered if it really was any different from films that I had seen before. As it settled in my mind over time, I realized that it was a cut above.

Banks Repetta stars as Gray’s on-screen surrogate, Paul Graff, a sensitive Jewish kid growing up in early 1980s Queens. Paul, who dreams of being an artist, is at the age where he’s gently starting to rebel against his tightly wound, dysfunctional family. His mother, Esther (Anne Hathaway), is an overly eager PTA president, and his father, Irving (Jeremy Strong), is a perpetually high strung and stern presence. Paul finds the most common ground with his grandfather, Aaron (Anthony Hopkins), a holocaust survivor who offers sage advice and encourages the lad’s creative streak. A further rift in the family is caused when Paul starts up a close friendship with Johnathan (Jaylin Webb), a poor, black student with a fraught home life. Paul wants to support his friend any way he can, but his parents see the clearly struggling Johnny as a bad influence.

Like many similar projects made with such a high level of personal investment behind the camera, Armageddon Time boasts a noticeable degree of nostalgia for the climate and culture of its chosen time period. But Gray cleverly avoids treading in feel good tropes and signposts. Instead of gushing at length about how great the music, movies, fashions, and outmoded norms were back in the day, Armageddon Time is more intrigued by the fact that not many filmmakers are attempting projects this character based and immersive anymore. Certainly, the early 80s informs the actions of the characters a great deal – with outstanding production details that expertly exhibit both urban and suburban decay and vibrant, yet grimy looking cinematography from master lenser Darius Khondji (Seven, Uncut Gems, Funny Games) – but everyone involved in this story is paying the price for past sins and the nostalgia of others. This approach helps to make Gray’s latest more contemporary than other similar tales of growing up amid an ever widening divide between the rich and poor. It holds a mirror up to the past those illuminate the present.

The title of the film is one with a double meaning. The first, and probably most obvious, is a reference to The Clash’s politically charged anthem “Armagideon Time,” a song that’s expressly about class divide and injustice. The other (that the film has to explain a bit more in the early going for modern audiences) pertains to then U.S. President Ronald Reagan stating that the country’s loose morals was causing a backslide towards the end times, offering up comparison to Sodom and Gomorrah. It’s the refutation of this second meaning that gives Armageddon Time most of its fire and passion. Although on the surface it’s about two young men growing up under extraordinarily trying, but wholly different sets of circumstances, it’s also a pointed look at how things haven’t changed very much – and in some cases, have gotten worse – between 1980 and today. 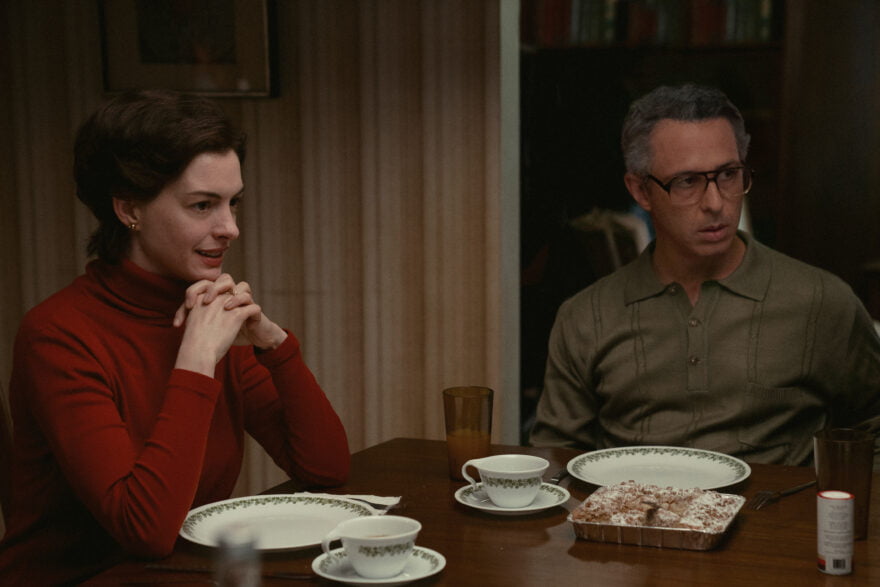 Although Donald doesn’t make an appearance, the Trump family looms large around Gray’s film, both literally and figuratively in the forms of John Diehl and Jessica Chastain as Fred and Maryanne Trump, respectively. There’s a clear parallel Gray is making between the two Republican leaders, and no punches are being pulled. In the background of everything happening here is a throughline about two rich, entitled personalities complaining about the world falling into disrepair and potential nuclear annihilation without realizing that they’re the ones causing the most damage. At times, Gray goes as far as depicting toxic, baseless conservatism as a form of abuse, but also noting that apathetically doing nothing to keep such thinking in check is arguably worse.

This is exhibited wonderfully in the relationships Paul has with his best friend and his holocaust surviving grandfather. In scenes when he isn’t opposite Webb or Hopkins, Repeta sometimes struggles with some of the heavier dramatic lifting, and it’s hard to tell if those are the hallmarks of a young actor trying to wrap their head around such a loaded script or because Gray has miscalculated how to direct his younger performers. But Armageddon Time comes to life whenever the story focuses on the poignant interplay between a youngster and the two people he respects the most. Webb is outstanding, and arguably the more interesting character. (One does wonder if this might’ve been a more compelling story if told from Johnny’s perspective instead of the affluent, white, and Jewish one that has been done in films before.) And Hopkins continues his late career resurgence with a confident take on a character that could’ve felt cliched in lesser hands.

Curiously, acting heavyweights Hathaway and Strong are the cast members who leave the least impression. Both are good in their roles as Paul’s concerned parents, but until the film’s final moments, they’re both playing the kinds of unexceptional cliches that the rest of Gray’s film has studiously sought to avoid. It might be an added layer of commentary on the “family values” mindset of the time and the parents’ sometimes contradictory view of the world (they aren’t conservatives, but they act as conservatively as possible when push comes to shove), but it isn’t landing as well as everything else in the film. The performances given by Hathaway and Strong are good, but for most of the film, their input feels more like a device to move things along rather than genuinely enhancing anything.

But despite the occasional narrative hiccup, Armageddon Time is a film that will stick with viewers longer than they might expect. It’s the sometimes stoic Gray’s most emotional and vibrant effort to date, and one that will unfortunately court plenty of comparisons to Steven Spielberg’s upcoming, similar, and already heavily lauded passion project The Fabelmans (which are technically being released by the same company). While the latter seems poised to eclipse the former, hopefully there’s room for both, especially when one considers that Gray is trying to balance his own experiences while tying things into the current state of cultural affairs. Both films have stuck around in my mind long after seeing them, and for different, but equally compelling reasons. 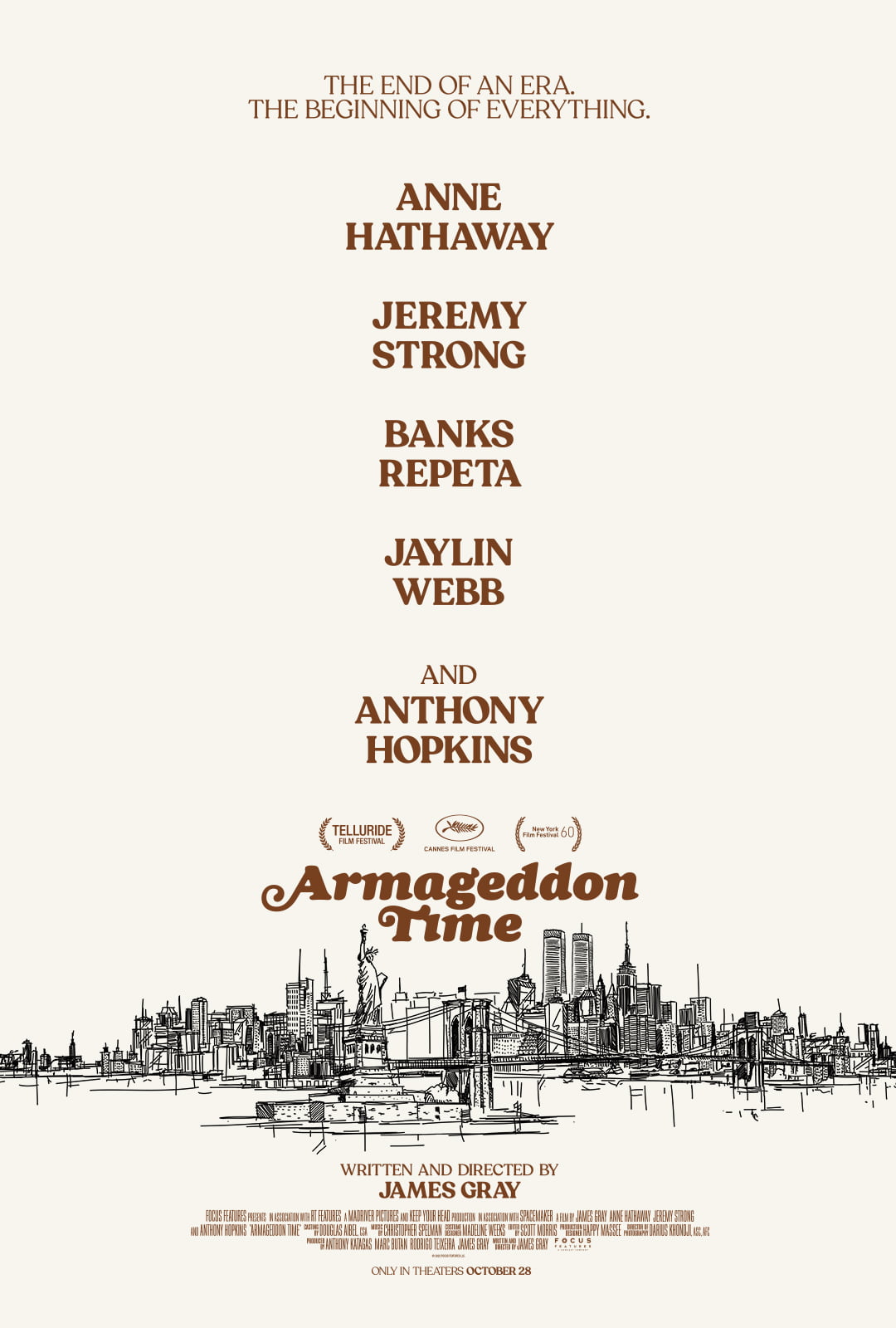