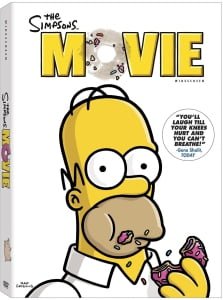 This week on DVD: television’s favorite family finally makes it to the movies after eighteen years, the deluxe DVD treatment of Blade Runner arrives, and Neil Gaiman‘s starry fable lands just in time for the Holidays.

The Simpsons Movie
Bart Simpson’s doodle, Spider-Pig, the death of Green Day, and a cast of hundreds. After over 400 episodes and eighteen seasons on TV, The Simpsons have made it to the big screen with a story that’s bigger than ever.

Once again, Springfield has a problem: toxic waste is taking over the lake, and big surprise, Homer is about to make things even worse. After more than a little trouble, the Simpsons escape to Alaska to start a new life, but can they really leave Springfield forever? Of course not, and it’s up to the family to make things right in the town again.

Like any great Simpsons episode though, the story is just half the fun. The Simpsons Movie is funny, endearing, and as you would hope, just a shade shy of being totally rude. It always sounds like a cliché when you say it, but The Simpsons Movie is definitely one of the best films of 2007, and it earns that from start to finish.

After all the years on TV, it’s also amazing that the show’s leap to the big screen feels incredibly fresh. There is also something to be said for an animated movie that literally feels like it pops off the screen. Definitely worth picking up.

Blade Runner
Ridley Scott‘s landmark sci-fi vision arrives in this ultimate collector’s edition. Included in the package is a brand new, remastered cut of the film, all three previous cuts of the movie, a pre-release work print of the film, plus two discs of extras.

Long-time fans of the cult hit have seen a number of versions of the film come and go, but this is easily the best looking one to date, with a lot of the previous glitches fixed.

Based on the Philip K. Dick novel, Do Androids Dream of Electric Sheep?, the film is set in a gritty future that is bleak, and lit by neon. It’s the year 2019 in the towering city of Los Angeles and Rick Deckard (Harrison Ford), is hunting down four androids who escaped from the colonies.

While Blade Runner is well-acted, smart, and intense, the film is also one of the best sci-fi films ever made, and benefits from the rich, noir elements and the truly stunning sets. Pick this one up for yourself, or that die-hard fan who can’t get enough of this masterful film.

Stardust
It seems like Neil Gaiman can take any story and turn it into a modern fairy tale. In Stardust, Charlie Cox plays the role of Tristan Thorne, a young man who wants to prove himself to a pretty girl. When a star falls across the forbidden wall, inside a magic kingdom, Charlie promises to go fetch it for her. Little does he know that the star is actually alive, and he’s not the only person hunting for her.

There’s no doubt that the cast goes a long way to making Stardust great. Claire Danes playing the fallen star, Robert De Niro as the captain of a flying ship, and Michelle Pfeiffer as the witch, the film is practically star-studded. Ultimately though, there’s no denying Gaiman’s skill at storytelling, which is the real reason the film is so entertaining.

Some critics have said that Stardust doesn’t quite feel magical, but most reviews were very positive. One of my favorite comments about Stardust comes from Owen Gleiberman of Entertainment Weekly, who finished his review by saying, “It’s the closest the movies have come in a while to the nudgy, knowing fairy-tale enchantment of The Princess Bride.”

Also available this week: Rob Zombie‘s abysmal remake of Halloween, Disney’s schlocky Underdog, the gorey Hatchet, season four of One Tree Hill, and Volume 1 of the first season of The Mod Squad.

Check back next week for a look back at the best DVDs of 2007.