The Menu Review | A Chef’s Kiss (of Death)

It’s way too easy to make food related puns to describe the delightfully dark and twisted tale The Menu. It’s gleeful bit of unhinged, violent, and nerve wracking satire that isn’t always subtle but remains consistently on point. Making the most of two stars working at the absolute height of their capabilities and a stacked supporting cast to match, The Menu is the most fun anyone can have at the movies this year that involves becoming hungry, laughing heartily, and being revolted all at the same time.

Set in the world of fine dining, The Menu revolves around a dozen foodies paying thousands of dollars a head to visit a secluded island restaurant run by enigmatic gastronomic genius Chef Slowik (Ralph Fiennes). Most of them are there for the bragging rights of having experienced such a remarkable tasting menu: a renowned critic (Janet McTeer) and her sycophantic editor sidekick (Paul Adelstein), a trio of loathsomely sleazy finance bros (Mark St. Cyr, Arturo Castro, and Rob Yang), a has-been movie star (John Leguizamo) and his soon-to-be-ex-girlfriend-slash-assistant (Aimee Carrero), a pair of wealthy regulars (Reed Birney and Judith Light). The only person who doesn’t seem enthralled with the concept of eating high concept cuisine is Margot (Anya Taylor-Joy), the last second replacement guest for Tyler (Nicholas Hoult), an overly eager know-it-all who fancies himself an expert on Chef Slowik’s food and career. What Margot doesn’t know is that her unexpected presence has thrown off a master plan devised by the chef and his loyal staff to leave the restaurant’s patrons begging for less.

Almost immediately, it’s easy to tell that The Menu will be heading down a dark path. All of the characters except for Margot are so immediately loathsome or dull that the viewer knows there will have to be some sort of unifying thread to pull everything together before individually ripping them to shreds, emotionally and physically. Despite being a chef with the most impossibly high standards, Slowik and his robotic legion of sauciers, sous chefs, and servers can barely hide their contempt for the wealthy jerks to which they cater, with each passing course bringing the clientele closer to a reckoning.

Concocted by television veterans well versed in skewering the rich and abhorrent – director Mark Mylod and screenwriters Will Tracy and Seth Reiss – The Menu is one of those thrillers that revolves around each reveal being more shocking than the last. Some of these shocks are more predictable than others, but all of them are satisfying, and the reactions of the hapless patrons range wildly but believably from frustrated to delusional to outright terrified. Mylod and Tracy have previously collaborated on Succession, and that same sense of caustic humour and cynicism about human nature abounds here. There’s a profound sense of comedic malice revolving around the concept of a chef that can somehow act more elitist than his guests, and The Menu serves as a stark, often hilarious reminder that making food for people is a resoundingly blue collar activity that requires preternatural attention to detail and the mental constitution of a solider. 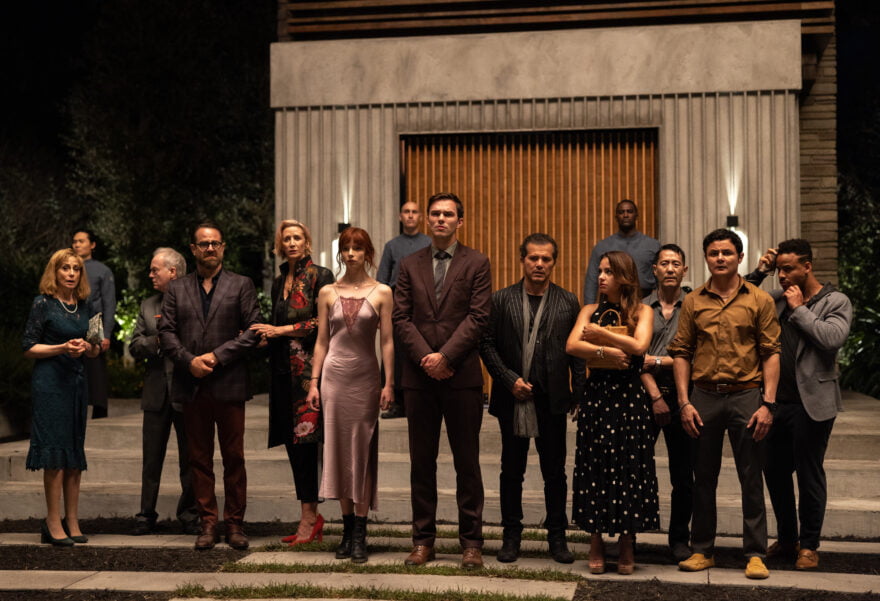 Much like the food created by Chef Slowik, the look of The Menu is decidedly minimalist, which is part of the grand joke being played on everyone, including the audience. Mylod’s direction is simple: allow great character actors the chance to play around with a twisty concept, juicy parts, and a razor sharp script. The cinematography and score help to make The Menu feel more sinister than something that could’ve easily worked on stage. While the focus is on the words, deeds, and motivations of the characters, Mylod’s almost claustrophobic one-room approach to storytelling adds a nice element of intensity.

Every actor makes the most of their time spent on Hawthorne Island, with all of them bringing something captivating to the table. McTeer can deliver compliments and criticisms so backhanded, rehearsed, and effortless that it’s sometimes hard to tell if the character has a single genuine bone in her body. Leguizamo nicely plays a cad who wants to be adored and ignored at the same time. Hoult’s ability to play an oblivious, self-absorbed doofus is as unparalleled here as it is on The Great. It’s also nice to see Hong Chau get one of the best roles of her career thus far as the restaurant’s relentlessly creepy and hard edged hostess.

But the film wouldn’t work as reliably as it does without the tandem of Fiennes and Joy. Fiennes’ terse, vindictive, and sometimes strangely relatable chef is some of the actor’s career best work; able to chill viewers to the bone while making them chuckle. Chef Slowik is a force of nature, so his biggest opposition at the dinner service has to be a presence strong and likeable enough to right the obvious psychological imbalance. As the audience surrogate, Joy provides Fiennes with both a perfect counterpoint and sometimes an unlikely confidant. Fiennes and Joy represent the darker sensibilities of human nature, but one has a healthier way of expressing their disgust with loathsome wealthy people. They both command the screen, which is quite the feat in a film packed to bursting with memorable performances.

The Menu is a borderline stressful film to sit through, but that’s part of it’s appeal. It’s like walking through a restaurant themed haunted house as envisioned by modern artists influenced by Dali and Buñuel. The eventual screams and blood letting in such a horror satire are always heavily telegraphed, but that’s part of the fun. Even if the characters in The Menu seem confused or aloof, the viewer is always in on the joke.

The Menu opens in theatres everywhere on Friday, November 18, 2022. 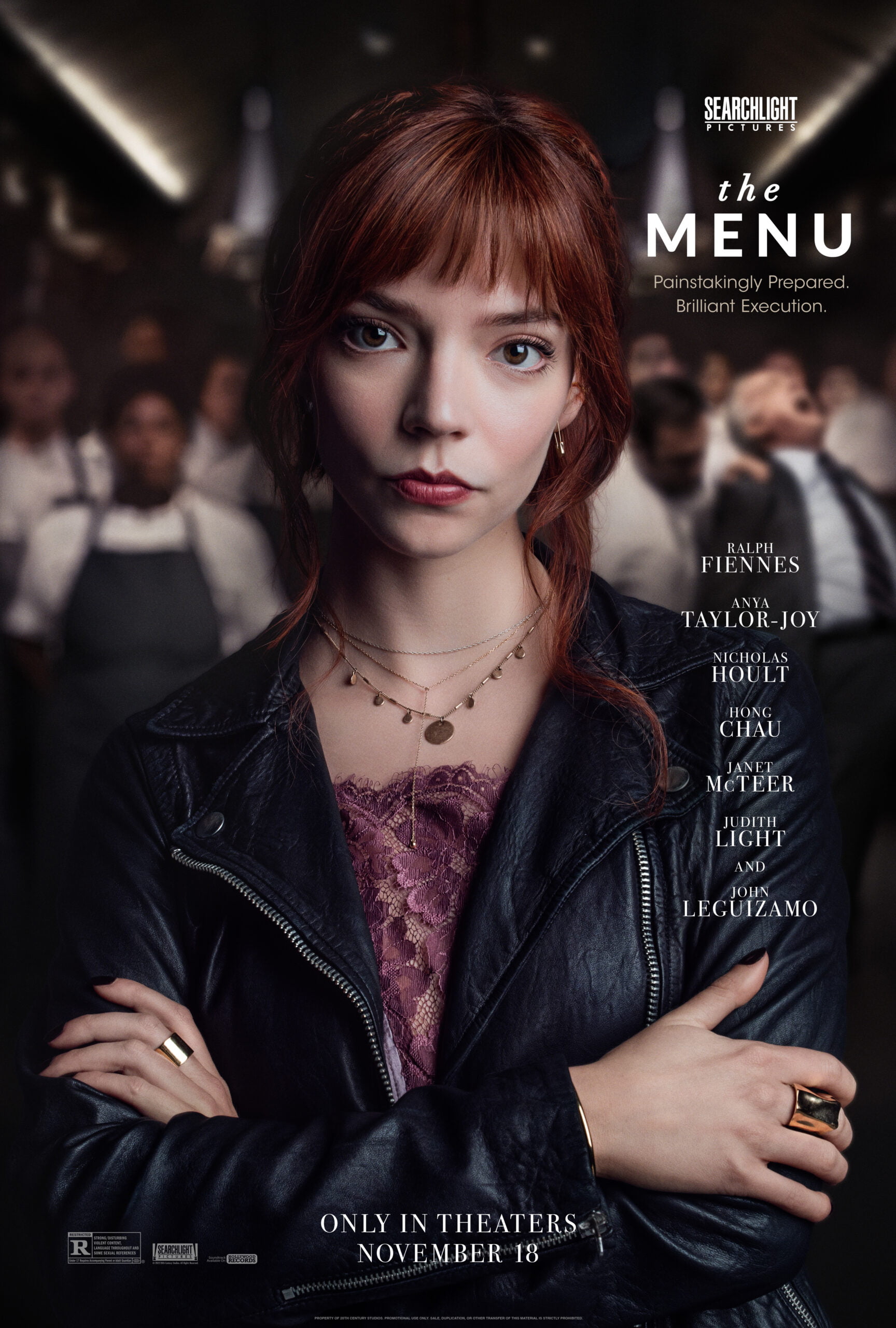