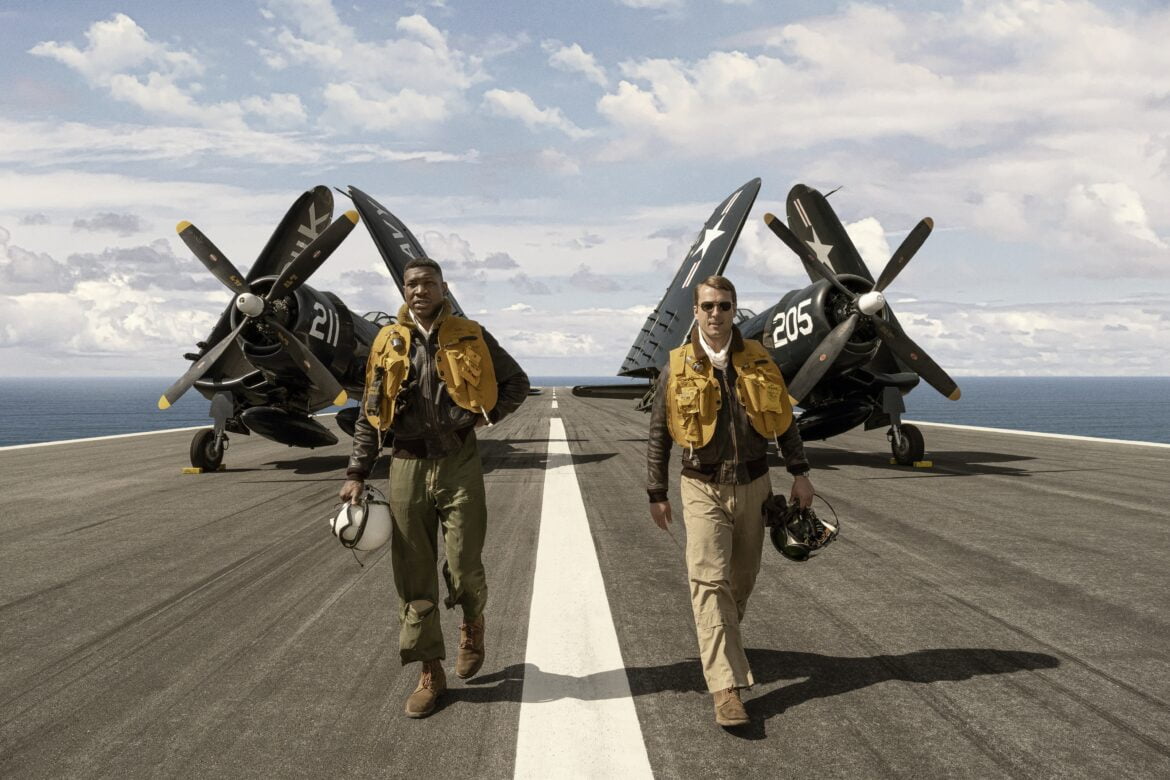 The Korean War set military drama Devotion deals not only with America’s “forgotten war,” but also racism within the military, and while neither major aspect of the story is reinventing the wheel, it’s so well done and attuned to fine detail that the results are quite satisfying. It’s not new knowledge that there was rampant racism in the U.S. military during the 1950s, nor that soldiers, pilots, or anyone else on the front lines of the Korean War were part of a largely thankless task that’s lost a bit to history today. But Devotion works overtime to make sure it never focuses solely on its more obvious aspects. The result is a rousing wartime melodrama that succeeds at putting viewers into the boots of the characters.

Naval academy graduated pilot Tom Hudner (Glen Powell) has just been transferred to a new unit in Rhode Island, where he’ll be continually groomed into becoming a leader. In his squadron is Jesse Brown (Jonathan Majors), the first black airman in the history of the U.S. military. Although Jesse is a family man and Tom’s a bachelor, they form a unique bond as the most low key and least chatty members of their unit. But whereas Tom has had a relatively easy go of things on his way towards topping the chain of command some day, Jesse has to work harder than anyone else out there because he’s black. Jesse constantly walks on eggshells, dodging racist slurs from fellow soldiers, always making sure his work is perfect, and constantly feeling the cultural weight of being the first black man to hold such a position in the Navy.

Based on a true story, Devotion holds its characters in high esteem, especially Jesse Brown. While respected by most of the pilots in his squadron, Brown’s existence in the larger military whole is far more fraught. The white, run-of-the-mill grunts and sailors treat Brown with utter contempt, getting into his head so much that he tragically has to psyche himself up everyday before going into work by looking in the mirror and recounting all the awful things everyone has said about him. But all the black people on board their carrier treat Brown like a conquering hero; something to aspire to and be inspired by. Then there’s the matter of how top military brass treats Brown, touting him as an achievement in diversity hiring and parading him in front of the press. All of these conflicting elements and responsibilities combined make Brown a complex, rich human being to build a film around. Even the quieter moments where Jesse endears himself to the men around him or whenever he gets a moment alone with his wife (Christina Jackson) and child feel like monumental achievements without the writers or director needing to resort to melodramatic short cuts.

The leads of Devotion lean into this moral, social, and emotional complexity well, with Majors continuing his string of star making performances. The passion that Jesse has for his service and the frustrations he has to keep bottled up are elegantly realized by Majors. Jesse isn’t a theatrical person, but Majors knows precisely the best moments to show wealths of emotion, even with something as simple as a silent glance. Powell also does some solid work as Jesse’s closets confidant and counterpart, even if the character is a lot like the one he played earlier this year in Top Gun: Maverick, except this time if that pilot was a genuinely good person of privilege who only wanted to do right by everyone around him instead of being a self-serving jerk. Their chemistry together is outstanding, as is the bond shared between Majors and Jackson, the latter of whom does a fine job with a part that’s traditionally underwritten in these types of films. 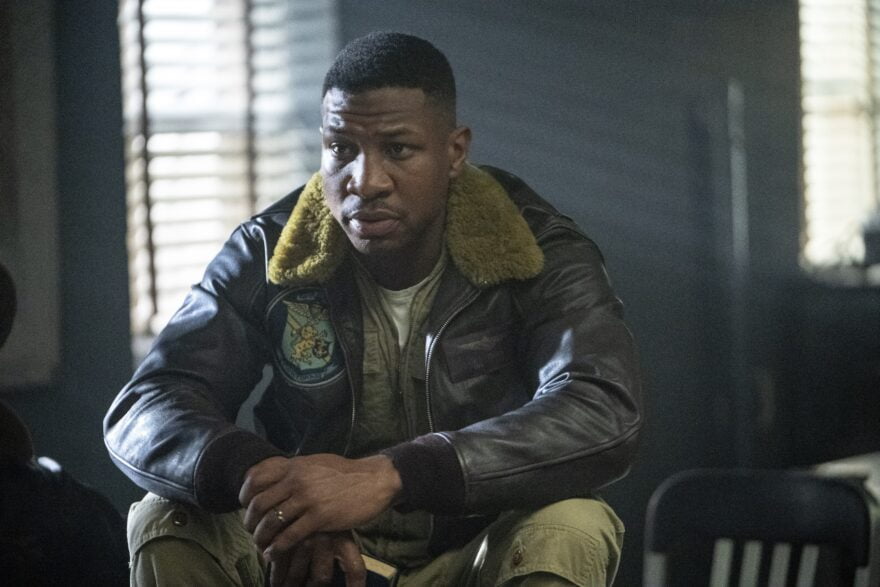 Sure, there are a fair number of scenes in Devotion that express plenty of cliched sentiments – like “please look after my husband” and “you’d do the same for me” – but what sets this war picture apart is the outstanding work of director JD Dillard. Previously best known for making some memorable, low budget genre pictures (Sleight, Sweetheart), Dillard proves beyond a shadow of a doubt what he can do with a larger canvas, revelling just as much in the visuals and enriching small details as he does the larger story at play.

The battle and flying sequences in Devotion are uniquely impressive; bursts of smoke and fire exploding and hovering in the skies, flames glowing brightly against the setting sun, eerie symmetry, the vastness of oceans that look like they could swallow the carrier whole. The visuals are enhanced by Dillard’s interest in the finer details of everyday pilot life. A large part of the film (including an admittedly overlong bit where the soldiers rub elbows with Hollywood royalty while on shore leave) is interested in the moments between and leading up to the battles. There’s a fascinating thread in here about the pilots trying to figure out the newer, clunkier planes they’re being forced to use after years of training on crafts that are completely different. Devotion is as interested in the process of these pilots as much as it is the people carrying out orders.

Devotion is a film where the smaller touches help to elevate the larger whole. Without them, Devotion wouldn’t be much more than an everyday inspirational true story. Every layer employed here gives the viewer additional reasons to care, and Dillard helps to reclaim the life of its game changing protagonist and reestablishes the contributions of soldiers from a period in American history that doesn’t get talked about as much as it should. Devotion, much like the man at the centre of it all, doesn’t rest on its laurels. 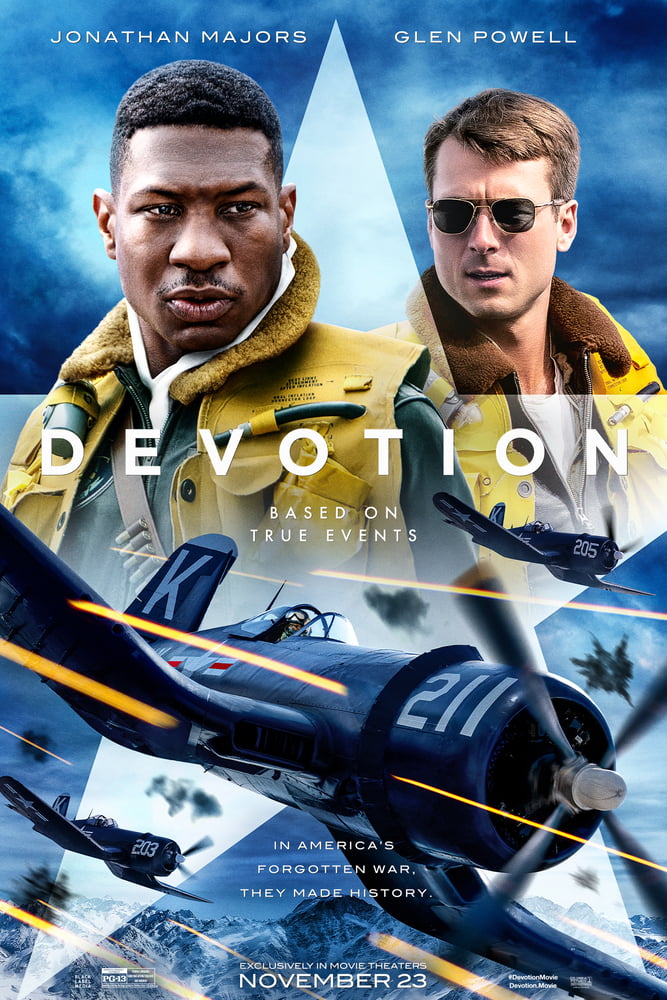