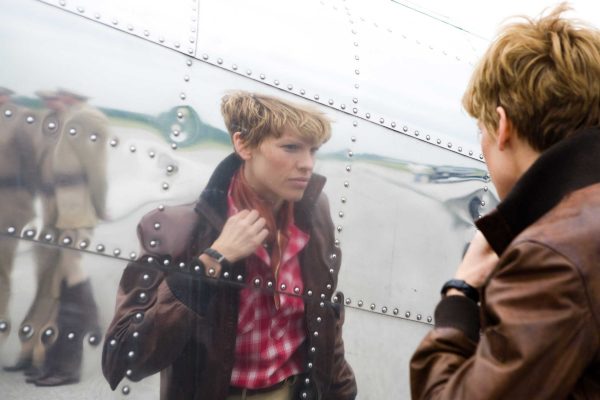 New this week at a theatre near you, Hilary Swank is the one-and-only Amelia Earhart in the drama, Amelia; in the animated adventure Astro Boy, Freddie Highmore voices a young, robotic hero as he tries to understand what role he has in the world; John C. Reilly stars as a vampire in Cirque Du Freak: The Vampire’s Assistant, the latest Saw movie debuts, and a look ahead at Michael Jackson – This Is It.

Amelia
As the summer becomes a memory, and winter looms, a whole other season is starting to unfold in theatres. Moving ever closer to the end of the year, the film studios are getting ready for awards season by raising their flags above their most noteworthy movies, which usually means we can expect to see at least a couple of new biopics, that most well-known form of Oscar fodder.

Reviews are somewhat split going into the weekend, so I consider the film a bit of a gamble. If you enjoy biopic dramas though, this could be an interesting film to catch.

Ray Bennett of the Hollywood Reporter wrote that the film was a “top-flight portrayal of the aviator by Hilary Swank,” which he considers “an instant bio classic.”

Meanwhile, over at Variety, Justin Chang was not quite as impressed. “To say that Amelia never gets off the ground would be an understatement; it barely makes it out of the hangar.”

Although my first instincts make me feel like Amelia really will just end up being Oscar fodder, there is no denying that Amelia Earhart is an incredible historical icon, and more than that, a heroin for an era that was unquestionably short on female heroes.

Astro Boy
For as long as there have been stories there have been tales of creatures, made by humans, looking for acceptance and some hint that they are in fact somewhat human themselves. Whether you’re talking about Pinocchio, Frankenstein’s monster, or any number of other stories, the concept is remarkably similar, but none pull our heartstrings quite as much as the idea of a child-like creation.

With its roots in anime and manga, Astro Boy is perhaps one of the best modern examples of the fable, and with its origins set in the 50s, it seems overdue for a feature film debut.

Set in the futuristic realm of Metro City, Freddie Highmore voices the young Astro Boy, a robot created by the genius Dr. Tenma, voiced by Nicolas Cage. Powered by positive blue energy, Astro Boy is super-strong, super-fast, has x-ray vision, and of course, he can fly. But with all that power he wonders what’s it’s really like to be human, and what part he’s supposed to play in the world, which sets him off on a journey that will ultimately make him the hero of his city.

Looking at the early reviews for this week’s releases, the good news is that Astro Boy looks like the best film of the weekend, earning numerous positive reviews.

As Des Partridge of Australia’s Courier Mail wrote, “The feature-length film, modelled on Pixar films, merges the best of western and eastern animation styles. [The] result is an entertaining film that should satisfy both adults and children.”

Cirque Du Freak: The Vampire’s Assistant
In The Vampire’s Assistant, Chris Massoglia stars as 14-year-old Darren, a regular teenager living in the suburbs, until he and his friend stumble onto a freakshow populated by real freaks. John C. Reilly plays the vampire Larten Crepsley, who convinces Darren to join him, without explaining that he’s about to break a long-held truce between two groups of blood suckers.

The oddity of the film is the way the promotional materials suggest The Vampire’s Assistant is a thrilling comedy for teens, while the press notes for the film try to make the film sound kind of horrifying. As far as I can tell though, looking at early reviews, the only thing horrifying might be the script and the story itself.

Critic Emanuel Levy commented on his website, “It’s been awhile since such a structurally messy, poorly cut film has been released by major studio, one which can’t decide what it wants to be, scary vampire horror, freakish circus saga or Freudian coming of age tale of rigid fathers and sensitive sons.”

While Aaron Hillis of the Village Voice summed up the experience: “The vampire trend continues, but the only authentic bloodsuckers in Cirque du Freak are its producers and studio execs.”

Saw VI
This one is pretty cut and dry; either you’re a Saw fan (still) or you’re not. Personally, I haven’t been a fan, and I have a hard time understanding why anyone has been interested in the last four (or five) movies, but to each their own.

The film wasn’t screened for press, which is obviously a bad sign, but that hardly means anything for this kind of horror film. It will likely, sadly, have a decent weekend box office, whether it’s good or just another Saw film.

Opening October 28:
Michael Jackson – This Is It
Finally, although the film has sold out for the entire two-week run anywhere that it’s playing, it’s worth mentioning that the behind-the-scenes film, Michael Jackson’s This Is It, opens next Wednesday. Pieced together from more than one hundred hours of footage, the film takes a look at Jackson’s rehearsals prior to the planned concerts set for London this past summer. After his death, Sony Pictures stepped in to create a tribute from the footage, which includes a candid look backstage, performances of a number of his biggest songs, and what would end up being his final filmed appearance on stage.