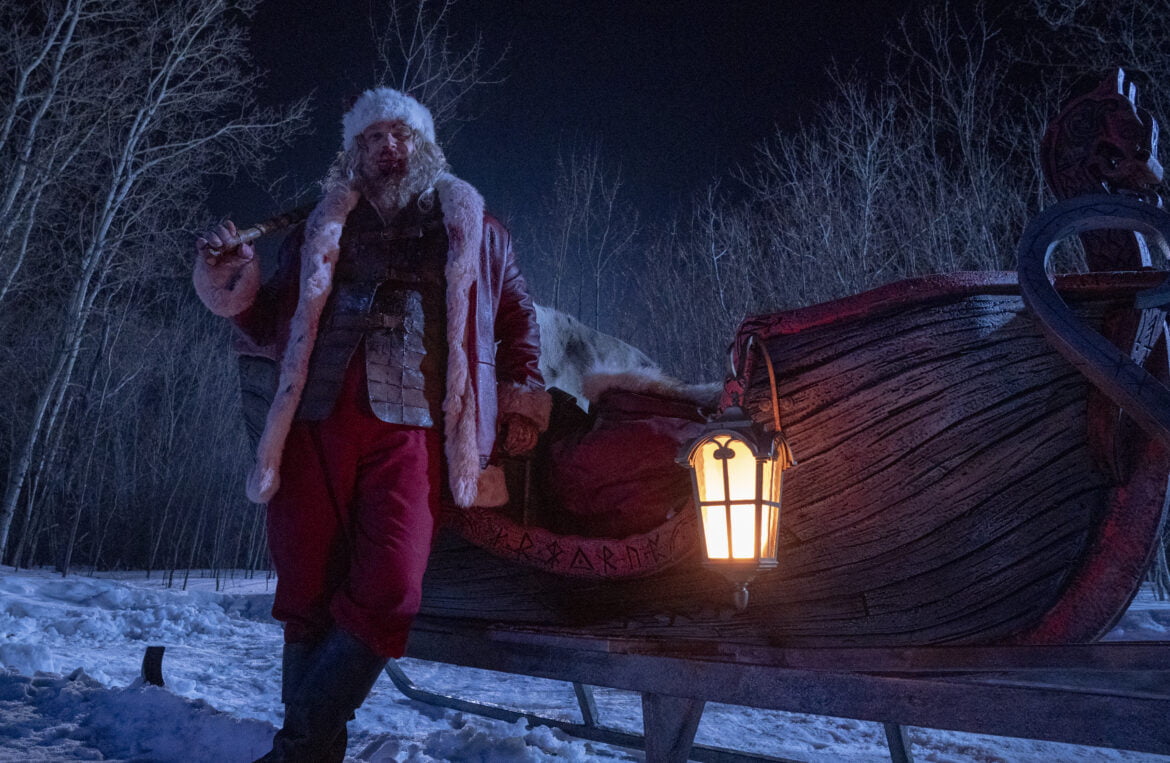 It might sound like a strange criticism to levy against a film where Santa Claus engages in a bloody war with machine gun toting mercenaries, but director Tommy Wirkola’s Violent Night isn’t dumb enough to be all that fun. While there are some inspired flourishes, gleeful bits of gore, and a healthy dash of yuletide sentimentality to be found in this John Wick/Die Hard/Home Alone hybrid, there’s also a lot of corniness, unfunny jokes, cynicism, and padding that always threatens to ruin the good will it builds in its better moments. The stuff in Violent Night that’s done well is really good and fun, but it’s all barely outweighed by swaths of unnecessary plot and flop sweat drenched one liners that could’ve been better handled or excised entirely. It’s a film that only hits the target fifty percent of the time.

David Harbour plays jolly old Saint Nick, who finds himself drunk and down in the dumps this holiday season. Fed up with with all the greed and selfishness that keeps his naughty list growing, Santa is thinking about packing it all in after this Christmas. But his already rough night filled with projectile vomiting and reindeer poop is about to get worse when he finds himself stranded at “the most secure private compound in the country” when dropping off some presents in snow covered Greenwich, Connecticut. The estate belongs to the wealthy, arrogant, aloof, and generally loathsome Lightstone family, led by the foul mouthed and cruel Gertrude (Beverly D’Angelo). They’ve been taken hostage by a bunch of ex-military mercenaries with cutesy holiday themed code names – led by John Leguizamo’s Scrooge – who are looking to crack into a vault containing $300 million in dirty oil money. Santa really doesn’t have the time, energy, or Christmas spirit to get involved, but he has a change of heart when he learns that the family’s youngest child, Trudy (Leah Brady), is kind, generous, and a true believer in the power of the season. Cue the holiday puns and brutal punishment.

But before that cue can arrive, audiences will have to sit through an unconscionable amount of set-up that’s relatively worthless in the grand scheme of things. It’s nearly 45 minutes into Violent Night before anything genuinely exciting or amusing happens. The script from Sonic the Hedgehog writers Pat Casey and Josh Miller is a good three or four passes from being completely usable, leaving the only mildly capable Wirkola (Dead Snow, Hansel and Gretel: Witch Hunters) to try and keep things moving along the best he can. 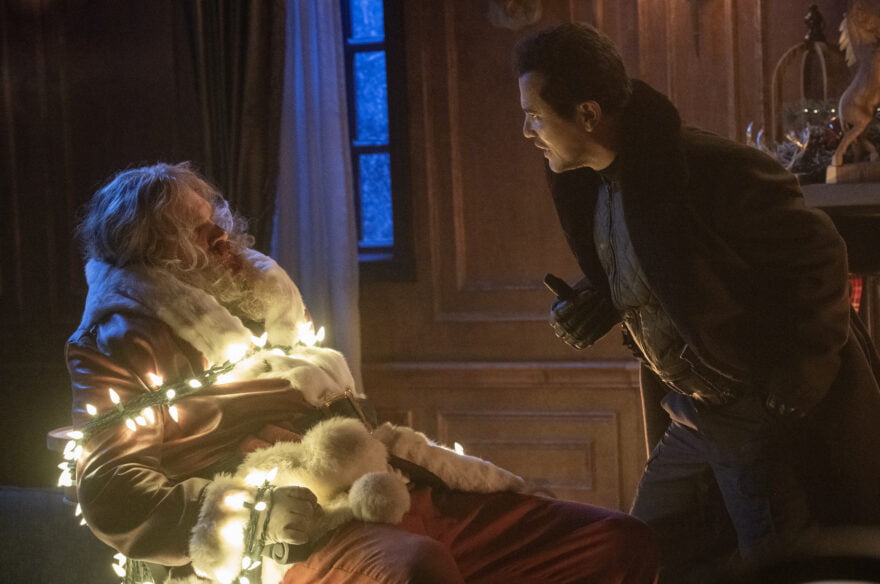 Most of the early going is spent getting to know the backstabbing, haughty, and boorish Lightstone clan, all of whom are not much more than thin outlines and outlandish caricatures. Leah’s mother (Alexis Louder) is somewhat decent, but all we know about her is that she’s divorced and doesn’t want to be there. The kid’s dad (Alex Hassell) is so obviously hiding something that it becomes annoying to watch the film tap dance around it. Gertrude is a stereotypical jerk. Gertrude’s boot licking daughter (Edi Patterson) is a one joke character, as is her vapid, aspiring actor boyfriend (Cam Gigandet), and their kid is a social media obsessed cretin (Alexander Elliot). It wouldn’t be so bad if these characters were actually funny, but they aren’t. They’re both mean and dull, and unless Wirkola briefly cuts back to the villains getting into position or watching Santa slowly go through the motions of his evening the early going of Violent Night is a near terminal slog.

Strangely, although Harbour is great throughout and a perfect choice for an ass kicking Santa, Violent Night picks up the most when Leguizamo’s pitch perfect, Christmas hating villain arrives on the scene. Harbour might’ve been able to save things somewhat on his own once Santa switches into hero mode, but it’s Leguizamo’s genuinely funny misanthrope who pulls Violent Night out of a tailspin and into entertaining territory. Most of the family isn’t worth saving, but Trudy (nicely played by young Brady) is a youngster worth protecting from a villain that’s worth fighting. Harbour, Leguizamo, and Brady have wonderful chemistry together, balancing the nastiness and requisite holiday movie sentimentality in charming, captivating ways.

Once the action kicks into full gear, things are still hit or miss. Wirkola never shies away from rivers of blood or clever gags involving nutcrackers, candy canes, tree lights, fireplaces, and even a baby Jesus from a lawn manger. But the fights aren’t up to the standard most viewers probably expect from a project billed as being from the producers of Bullet Train and John Wick. The fights look like they would’ve been pretty cool in 1996 but are just kind of passable today. Poor lighting (which is a sin given the fact that this takes place at literally one of the most colourful times of the year) and editing so bad that it’s often hard to decipher who is doing what to whom at times don’t help matters.

But Violent Night never takes itself too seriously to make these glaring issues into outright detriments. It’s not as great as it’s premise could be. In fact, one wishes the film would just shave thirty minutes off its running time by just diving straight into the story and cutting out all the filler. At the advance screening I went to, lots of people were pulling out their phones during the duller parts to look at Tik-Tok, Instagram, and texts, only looking up at the screen when something explicitly exciting or funny was happening. They were still having a good time, but even these people who were committing theatre etiquette faux pas knew they didn’t have to take in all of this to figure out what was going on. Maybe if Violent Night truly embraced what it actually is – a dumb bit of fun with a silly premise – it would’ve held their attention better. 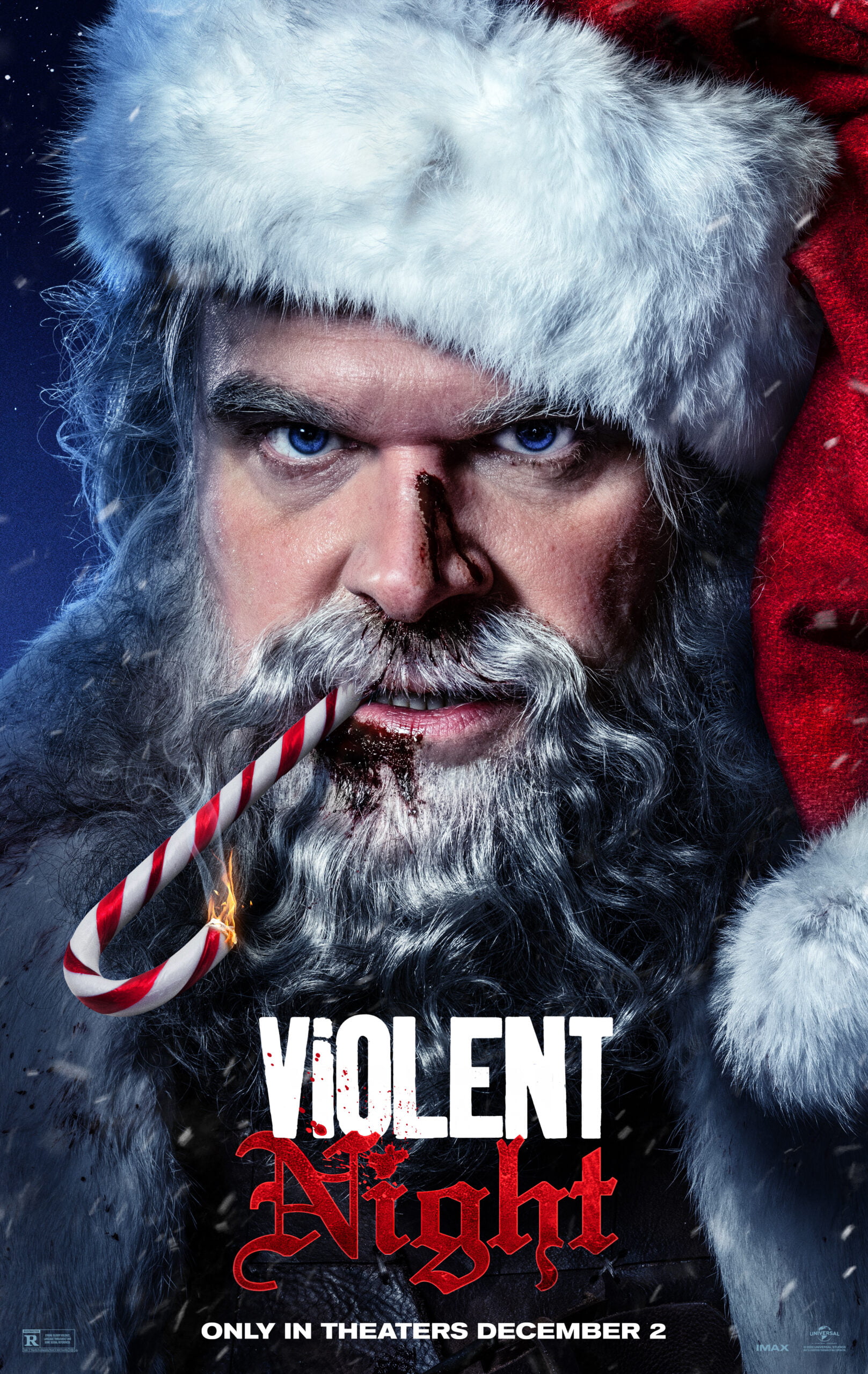