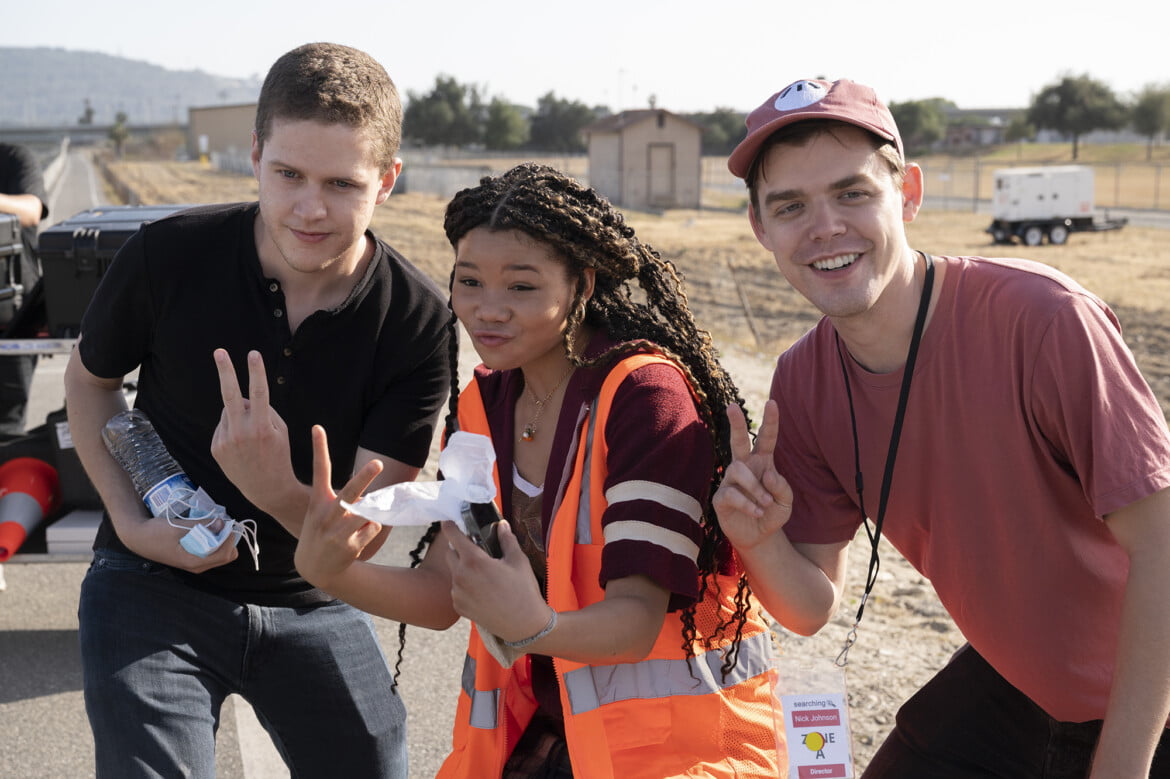 Missing stars Storm Reid as June, a daughter looking for her mother who went missing while she was on vacation in Colombia, and there’s a lot more going on than she could have imagined.

The film follows Searching, with the same format that was created by Sev Ohanian and Aneesh Chaganty, and it was co-directed and co-written by that film’s editors, Will Merrick and Nick Johnson.

Told through a computer screen and cameras in key locations, Missing is tense and heartfelt, with a thrilling dive into a digital world that actually makes sense where so many films make everything up.

While June searches for her mother from their home in Los Angeles, the film cleverly creates new questions as June solves old ones, and Reid is fantastic every step of the way.

Speaking with the co-directors, I asked them about the process of making a film like this, their most triumphant moment, and how Reid brought the story to life.

Missing is in theatres now. Watch the trailer on YouTube.

It’s interesting to think about making a movie like this because I’m curious how difficult it is to storyboard? Do you storyboard it in the traditional sense, or how does it work?

Will Merrick: “I remember when we edited Searching, that came out in 2018. We came into the office and sat down and there was nothing, like no footage. Like, take a screenshot and get going. And I think our editors on this had a similar experience. We don’t actually storyboard since the movie is told on computer screens anyway.”

“In this case, our editors, Arielle [Zakowski] and Austin [Keeling], started with just taking screenshots and assembling them. And you never really know how to do it, but you know what to do next and you just keep going.”

Do you both have specific roles that you fit into as co-directors or what is your process like?

Nick Johnson: “No, I mean, we never really consciously laid out any sort of role. That includes in the editing as well. Like, I think we always just shared the responsibilities equally and worked on things. We trade off and kind of swap scenes. And then as writers, we do the same thing. We would develop together, and then I take this and you take this scene, then we swap, we rewrite.”

“And then when directing, honestly at that point, we had written the script, we had pre-viz for 27 weeks, we were so on the same page that it was purely just a logistical like, ‘I’m going to go over and tell this person, you want to tell this person this other thing?’ There wasn’t a lot of communication, it was more just like, we know exactly what we need to do.”

“We just needed to split up; divide and conquer…”

So then in this process, what comes first? Are you talking about building out the visuals first, before you film, or are you filming, getting the things you need and then putting it together?

Merrick: “The first, really, because we know narratively we’re going to need a notification or the character is going to need to be watching something and we do change that stuff later, but at least going in, you can’t just put an actor in front of a screen and say, ‘just do whatever and we’ll make it work later.'”

“So we need to be able to tell them what their character is doing.”

Johnson: “And I think that’s one of the challenging things for the actors as well, is then they’re trying to be really emotionally available and focus on the scene and be in the moment, and then we’re also telling them, ‘oh, but also, after you say that line, make sure you look up in the right hand corner because there’s a notification that comes in like don’t forget that.'”

“So there’s a lot of prep that goes into that ahead of time.”

When you’re talking about a film like this, do you find that there is a certain type of direction you need to give actors? Because it is a different format to some degree. It makes me think back to the days of silent films, in a funny way and how they had to perform differently because of the format.

Johnson: “Absolutely. I think we like to say that at every stage of the process, everyone had to kind of relearn their craft and that it comes down to the editors. Our DP had to do a lot of innovative, crazy, weird things and the actors are never just acting into a blank computer screen, that’s crazy, and we have serious conversations with someone who is reading into your ear or like off camera.”

“So, I think we were constantly amazed at all of our actors, but Storm [Reid] in particular who had to remember all these eyeline blocking and everything and then still managed to stay present and give a nuanced performance.”

Merrick: “Yeah, it’s kind of like she’s already playing with this computer and then having to act in a very authentic and vulnerable way at the same time.”

She’s amazing. And that’s my next question; what does an actor like Storm gift to the film because she’s so emotive and she brings so much to every single scene, even when she’s having conversations through the computer?

Merrick: “I mean, just like John Cho [in Searching] grounded the first movie, Storm did the same thing here. The whole movie is a close up of her face, practically, and even when you’re not seeing her, you’re behind her eyes, in a way, a lot of the time. And so the whole movie kind of grows around her.”

Johnson: “Yeah, she elevates everything we read on the page, honestly, like everything we wrote, it had the character arc and everything, but she’s the one that makes it feel real. Without her, it would just be kind of a pulpy thriller movie. But she makes it emotional.”

Working through this film, what was the most triumphant moment? Obviously the finished product must be right up there because everything comes together, but was there a moment that you really feel like, ‘Oh yeah, this is exactly what the film needed?’

Merrick: “Yeah, I would say a couple of nights ago we watched it with an audience for the first time and that was awesome. After we finished this and a huge phase of nit picking apart every little graphical detail and to finally sit back and not worry about that, I was like, ‘Oh, you know, this movie looks pretty good.'”

Johnson: “We’re movie goers and huge believers in the theatrical experience, and so to see an audience whispering to each other when they think something is about to happen or scream at the screen, or applaud when something happens, that is the most rewarding thing. And that’s why we do this, for that communal theatrical experience.”

And, just looking at it as a unique experience is really interesting because a lot of films fall into certain genres or styles. So I’m curious how you envision this. Like what genre would you call Searching? Is it a thriller or do you think of it as something else?

Johnson: “We think of it as as a detective mystery like a thriller, but I think you’re very correct to point out that there’s something very unique tonally about Searching and Missing. And I know that’s the case because when we go to temp score this movie, it’s actually really hard to find other movies with that the right tone.”

“So I know that there’s something to that. It’s really sincere, and at the same time, it’s about a family connection, but it also can get really dark and it has a lot of horror moments as well. So I think there’s something that [co-writer] Sev [Ohanian] and [director] Aneesh [Chaganty] created that was really magical and established with Searching.

“Our job was to continue that tone because we knew it really intimately and we knew that it worked really well.”

Well, not to compare it, but it reminds me in a little way almost to creating a new genre of film, because you think of something like the Blair Witch Project and how the found footage genre evolved from there. So there’s this feeling like you’re building on to a new kind of drama, basically.

Merrick: “I love comparing this to the found footage genre because it’s interesting. It’s totally different in terms of, nothing in this movie has to have happened on someone’s screen, but none of it is like recorded or found in any way. It is kind of a new thing in that regard, definitely.”

Johnson: “But also, the found footage genre was just taking classic horror tropes and giving it a new format, right? And so what we’re doing is taking things, taking tropes from Hitchcock and Spielberg and, and just giving it a new format and a very severe limitation, and out of that comes the alchemy that creates something new.”

So finally, what comes next for you guys?

“I mean, nothing is ever off the table, but we probably want to step away from the screen thing and do something else. Still innovative, something with really high life and death stakes. Another thriller, probably.”