When You Finish Saving the World Review | Persistent and Pushy 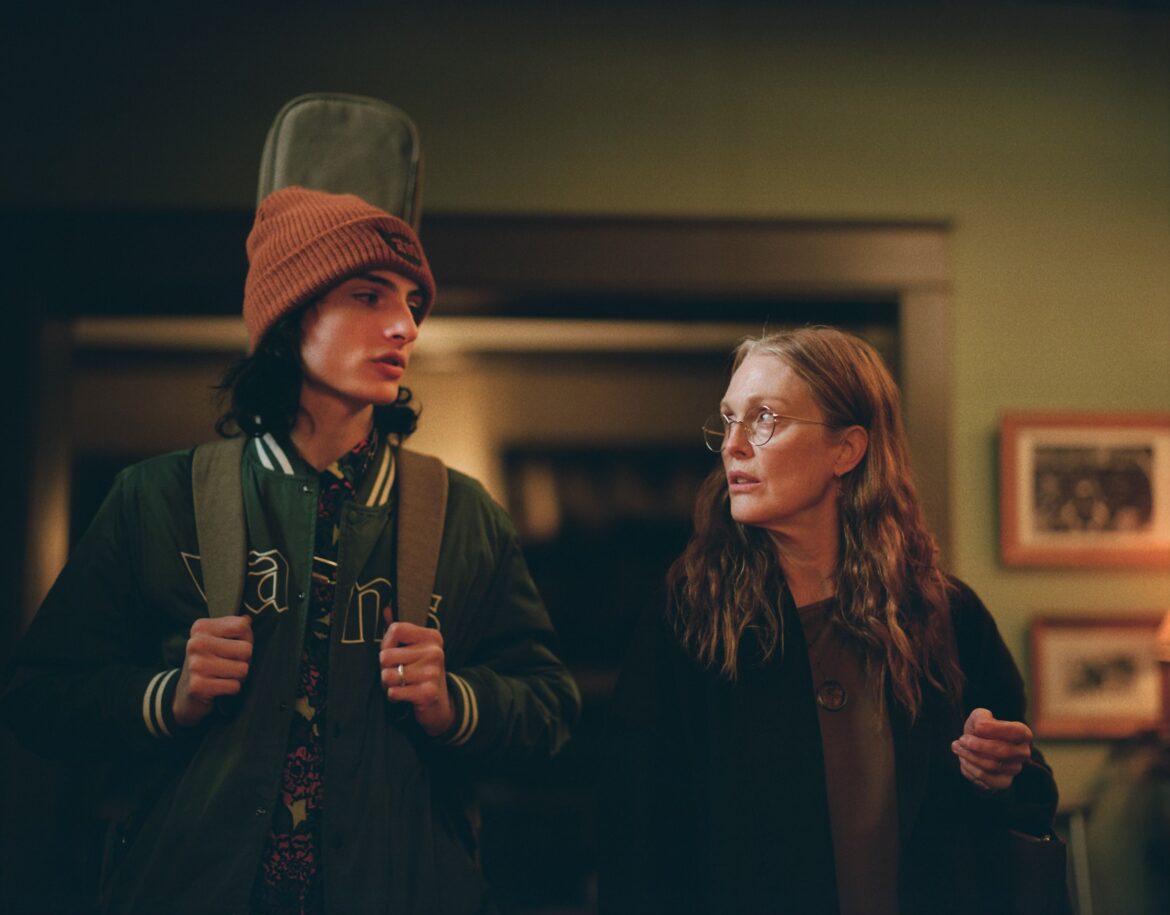 For his feature length debut behind the camera, When You Finish Saving the World, writer-director Jesse Eisenberg spins an off-kilter, but well reasoned slice of life centred around two people who are more alike than they would ever want to admit. While Eisenberg’s unique, but not always welcoming blend of abrasiveness and warmth is sometimes out of balance, When You Finish Saving the World does have a lot of interesting things to say. But when all of these admittedly well rounded concepts are crammed into a package too small to contain it all, the results are often overwhelming and rushed.

Julianne Moore and Finn Wolfhard are Evelyn and Ziggy Katz, a mother and teenage son who constantly find themselves at odds. Evelyn works in a shelter for domestic abuse survivors and their kids, while Ziggy is a typical high school student by day and a successful streaming troubadour in his free time. Ziggy’s songs are trite, teen ballads, but he takes his work very seriously. Socially conscious Evelyn can’t understand why her increasingly pushy and conceited son has chosen such a shallow career path. She thinks she raised him better than that. A wedge is driven further between them when Ziggy makes the uninformed and snap decision to try writing deeper, more politically motivated songs in a bid to impress his crush (Alisha Boe). With Ziggy pulling further away with his own projects, Evelyn starts doting upon Kyle (Billy Bryk), a 17-year old living at the shelter with his mother who shows a lot of academic potential, but likely won’t go to college without being pushed into it.

When You Finish Saving the World, adapted from Eisenberg’s own radio play, has a sarcastic title that rings like something said to both of the main characters many times in their lives. At various points in Eisenberg’s film, Evelyn and Ziggy are both branded as narcissists – by each other and those around them – but I would hesitate to push them into such a narrow box. While there is undoubtedly a lot of earned and unearned self-confidence and sketchy amounts of self-awareness, they’re more naive idealists with their heads perpetually stuck in the clouds. They are persistent, pushy people whose doting can creep people out just as much as it could invite others into their orbit. Both try to bend the world in their image, which tends to mask their overall good intentions. They constantly put themselves into situations out of their natural element, and they both see themselves as failures if things don’t go to plan, with every passing setback becoming a cause to lash out. Most toxically, both of them carry an attitude that suggests anything less than total love or gratitude is tantamount to disloyalty. 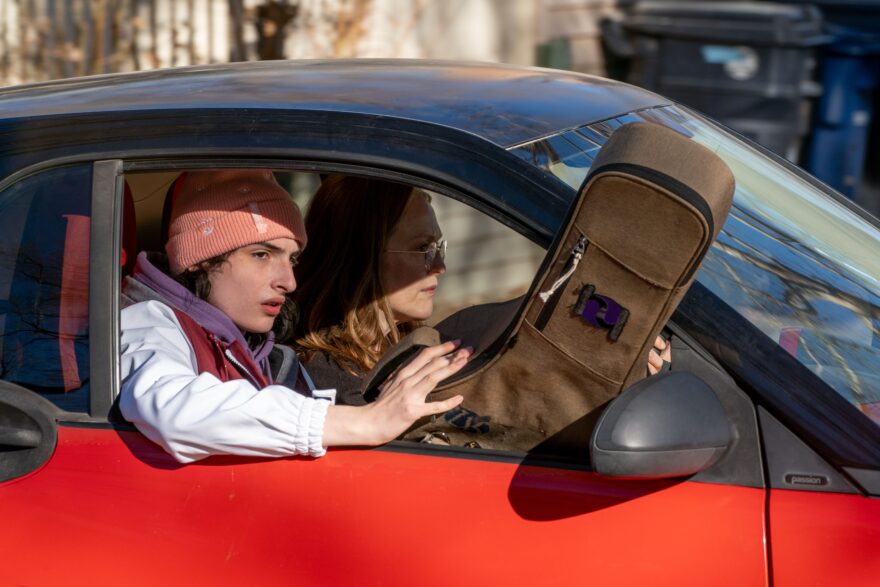 The core concept of When You Finish Saving the World works because everyone alive knows an Evelyn or a Ziggy, and they might have been/still are those same types of people. They crave attention, but once they have a spotlight thrust into their faces, they pull back immediately. (Ziggy’s reaction to such things is particularly interesting when one notices how confident and charismatic he can be when live-streaming from his room, but how painfully awkward and shy he is outside of those confines.) The relationship between this mother and son is patently believable and expertly played out by Moore and Wolfhard, the former of which is a veteran of this sort of role, and the latter is particularly impressive in his best performance thus far. These are two people who think they are naturally talented at what they try to achieve, and watching them repeatedly stumble and clash is sometimes delightful thanks to the performances.

But not everything about When You Finish Saving the World works as well as its leads. There’s not much style or panache to Eisenberg’s circumspect direction, and it’s clear that the actor is most comfortable letting his cast do most of the heavy lifting. That flatness causes the pace of the film to drag, doing a disservice to the snappy, albeit overly prosaic script. It helps Eisenberg a lot to have actors capable of bringing such difficult material to life, but there’s not much else to When You Finish Saving the World other than concept and performance.

When You Finish Saving the World is also brought down once Evelyn and Ziggy’s paths have fully diverged. It’s clear that the point is to show how these people are more alike than either would ever want to believe, but their separate problems don’t feel entirely tethered to one another, leading to a work that feels like it starts and stops whenever it has to shift focus. They’re interesting problems, with Ziggy learning that being socially conscious takes a lot more effort than he’s willing to put in, and Evelyn realizing that not everyone who seems troubled is a project for her to work on. When taken into individual account, each thread is okay, but has been done before. It never fully meshes with the more original aspects Eisenberg is trying to imbue into the material. It all amounts to When You Finish Saving the World being a film that’s easier to admire than it is to like. Then again, that’s kind of a perfect reflection of the film’s characters.

When You Finish Saving the World opens in select theatres – including TIFF Bell Lightbox in Toronto – on Friday, January 27, 2023. 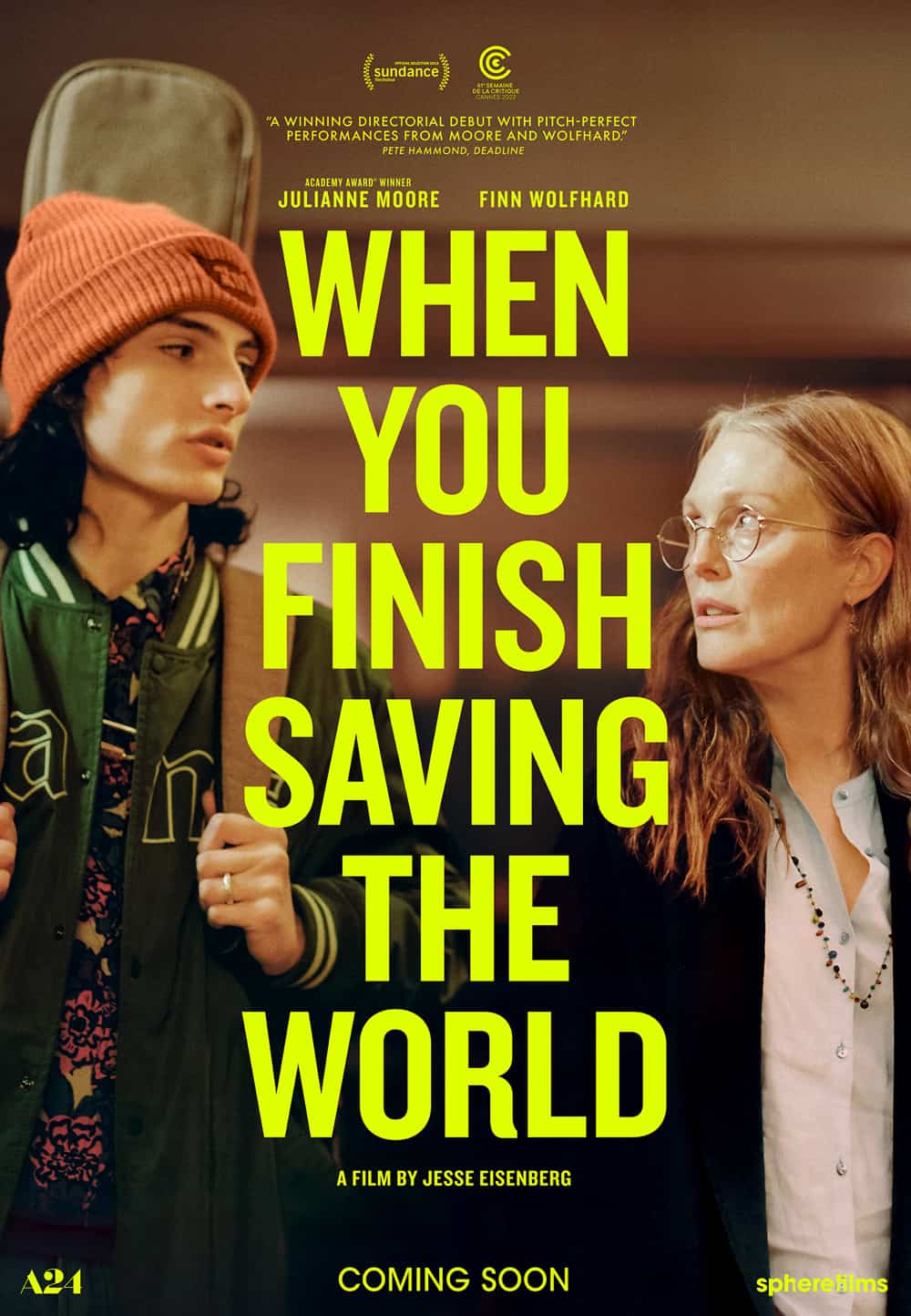