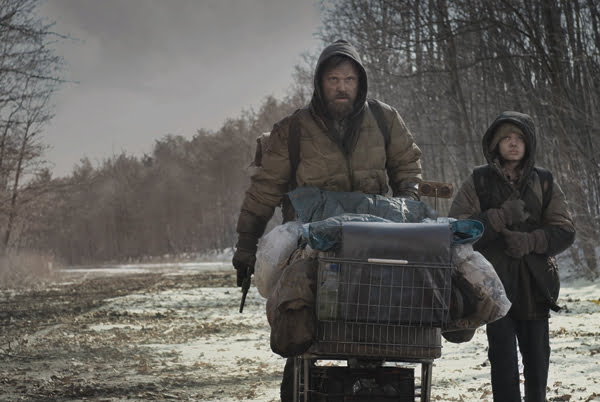 Viggo Mortensen in 'The Road'

Pulitzer Prize-winning author Cormac McCarthy is becoming something of a popular fellow among the film crowd. In 2007 the Coen brother’s adaptation of his novel No Country For Old Men was a critical success, capturing four Academy Awards, including Best Picture. There are also plans for an adaptation of his novel Blood Meridian in the next couple of years.

And of course this week director John Hillcoat debuts his vision of McCarthy’s post-apocalyptic thriller about a man, played by Viggo Mortensen, travelling across America with his son, trying to find some safe haven among the violence and ruthlessness that has broken out after a disaster claimed most of civilization.

Stark and often grim, but brimming with emotion, The Road is a story of survival and the human condition, which was called “emotionally shattering” by The Guardian when it was first published.

On screen, the adaptation is getting positive reviews from film critics, especially for Mortensen’s performance, but it not receiving the same glowing praise heaped on the book.

“While the film is not as resonant as the novel,” Claudia Puig wrote in USA Today, “it is an honorable adaptation, capturing the essence of the bond between father and son.”

From director Wes Anderson, who made the quirky hits The Royal Tenenbaums and Rushmore, comes what might be the filmmakers best work to date in the form of Roald Dahl’s classic tale, Fantastic Mr. Fox .

Coming in at 97% on Rotten Tomatoes, Fantastic Mr. Fox is easily the best reviewed film of the week, not to mention the month and perhaps even the season.

“Mr. Fox doesn’t just rescue Dahl’s legacy on film,” Ramin Setoodeh wrote for Newsweek. “In a year stuffed with kid-lit movie adaptations, it’s the only one to successfully reach out to children and adults.”

While Elizabeth Weitzman of the New York Daily News wrote that the film was “a visual treasure that successfully blends deadpan quirkiness with a wry realism rarely seen in any film, let alone one for children.”

On a much less impressive note, Old Dogs is the latest low-brow comedy from Disney, giving Robin Williams and John Travlta a shot at being comic stars one more time… and failing.

Williams plays a divorcee who discovers that he actually has children he never knew about and is suddenly expected to take care of said kids while he and his best friend, played by Travolta, work on what could be the biggest business deal of their lives.

You hardly need much more coaxing to see where things lead from there, and it seems that most critics agree that Old Dogs is the hacked-together comedy we all would expect.

John Hazelton wrote for Screen International, “There are no new tricks in Old Dogs, a broad and frenetic family comedy which puts John Travolta and Robin Williams together with two cute kids in a cozily predictable family-comes-first scenario.”

The other dud of the week is director James McTeigue’s (of V For Vendetta fame) Ninja Assassin, a weakly-scripted action film about a trained killer working to kill off the secret society that claimed him as a child and turned him the assassin he is today.

Starring Asian action star Rain as Raizo, the film is thin on plot, but loaded with blood and fight sequences that should impress diehard action junkies. For the rest of the population, it’s the usual “avoid at all costs scenario,” unfortunately.

“This amateurish action flick is so lacking in personality or punch, it ought to be titled ‘V for Video Store Discount Bin,'” Joe Williams quipped in the St. Louis Post-Dispatch.

Finally, I have to mention director Robert Siegel first film, Big Fan, which opens in a limited number of theatres this week.

Best known as the screenwriter for the fantastic breakout film, The Wrestler, Siegel stepped up to write and direct his latest script which is a mesmerizing story of one loser sports fan, obsessed with his home town team, and headed for disaster.

Patton Oswalt stars as Paul Aufiero, a 35-year-old New York Giants Fan working as a parking-garage attendant who still lives at home with his mother. Returning home each night, his one hobby is to call the local radio station and praise his favorite team.

When he gets the chance to meet the iconic star from the team, linebacker Quantrell Bishop, Paul’s life gets flipped upside down when a mistake leads to the star player beating Paul into a coma that lasts for three days.

Once he recovers his family urges him to have some sense and help the police lay charges, but Paul refuses to listen since he knows a conviction could ruin the team’s chances without their star quarterback.