‘Get Smart’ begins filming in LA 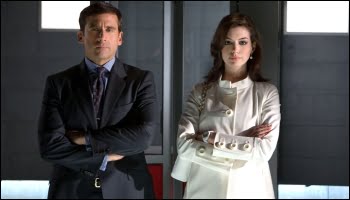 The adaptation stars Steve Carell, of 40-Year-Old Virgin fame, as the bumbling, but motivated Maxwell Smart and co-stars Anne Hathaway as the smart, and beautiful Agent 99. Currently filming in Los Angeles before moving on to Washington, D.C. and Montreal, Get Smart is being directed by Peter Segal, who made a name for himself directing Naked Gun 33 1/3 and Tommy Boy. The film is set to hit theatres in June 2008.

First appearing on television in 1965, the original series starred Don Adams and Barbara Feldon, and was created by funny man Mel Brooks and screenwriter Buck Henry. The show ran for a total of five seasons on NBC and won a total of seven Emmy Awards.

So far no story details have been released, but if it’s anything like the TV show the Get Smart movie will have Smart (also known as Agent 86), and Agent 99 working for the organization known as KONTROL and facing off against the evil group known as KAOS. Don’t tell me I have to wait a year for the movie to come out… I asked you not to tell me that!