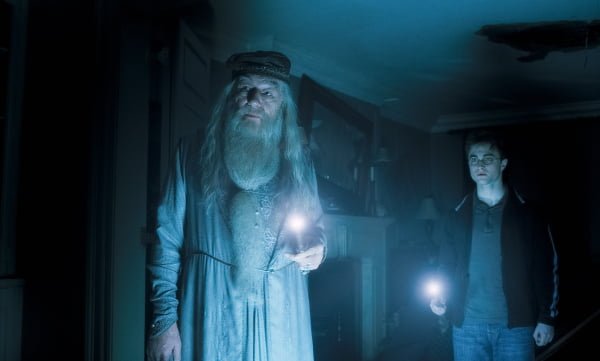 New this week on DVD and Blu-ray, Harry Potter and the Half-Blood Prince debuts just in time to make onto your holiday shopping lists; Johnny Depp stars as bank robber John Dillinger in Public Enemies; plus a look at Julie & Julia, The Cove, and the fifth season of Lost.

Over the last twelve years the world has been following the adventures of a young boy as he battled against the dark power of one evil wizard and his minions. With each passing year, and each new book, the franchise grew and grew, turning it’s creator into a revered figure among her many, many fans.

On the bright side of the film, the entire cast deserves high praise, as Radcliffe, Grint, Watson, Gambon, and all of the supporting cast worked their usual magic once again. There are three particular performances that stand out though.

Jim Broadbent is simply wonderful and entertaining as Slughorn, but I also can’t say enough about Alan Rickman as Severus Snape, and Tom Felton as Harry’s nemesis, Draco Malfoy. This trio of actors deserve the highest praise for their work because they simply found wonderful layers within their characters, which brings a lot of feeling into each of their scenes.

During the Great Depression, in 1933 to be exact, there was hardly anyone more admired and reviled than bank robber and known killer John Dillinger. While the United States suffered in the turmoil of a huge economic downturn, Dillinger was robbing banks, escaping from police, and being idolized as an anti-hero.

In director Michael Mann’s latest crime drama, following films like Miami Vice, Collateral, and Heat, Johnny Depp takes on the role of the infamous Dillinger, while Christian Bale plays FBI agent Melvin Purvis, hot on his trail and looking to take the criminal down for good.

He went on to write, “John Dillinger has been portrayed on film in a starring role at least five times and virtually all of them, as is the case with Public Enemies, focus on the eight furious weeks of crime and punishment that followed Dillingers release from a nine year prison term. Public Enemies, in my opinion, ties for the best of the bunch with the 1973 John Milius written and directed film called Dillinger.”

Looking at the Blu-ray release of the film, the picture quality is vivid, and there are a decent number of features looking at the making of the film, and all of the historical elements that went into retelling Dillinger’s story. The features are fairly short for the most part, but they’re interesting, especially in the case of On Dillinger’s Trail: The Real Locations, and Last of the Legendary Outlaws.

In this chilling thriller of a documentary, ocean preservation advocate Louie Psihoyos and dolphin expert Richard O’Barry work to infiltrate a secret cove in Taji, Japan where people are killing thousands of dolphins a year. Although horrifying, the film peers into the depths of brutality in the hopes of exposing this crime to the world.

The film is one of the few must-see documentaries of the year and stands a very strong chance of getting an Oscar nomination, and perhaps even winning the award. RottenTomatoes.com has The Cove rated at an impressive 95% fresh, which will invariably mark it as one of the best reviewed films of 2009.

Writer and director Nora Ephron, who made the classic romantic comedies You’ve Got Mail and Sleepless in Seattle, is back with an intriguing tale of two women, tied together by their passions, and their mutual urge to do something interesting with their lives.

In this unique story, Meryl Streep plays Julia Child and Amy Adams is Julie Powell, two women separated by over fifty years, but traveling a similar course. Based on Julie Powell’s real-life experiment, the story follows Julia Child’s rise to fame as a chef and author, and Julie Powell’s attempt, over the course of a year, to cook all 524 recipes in Child’s famed book, Mastering the Art of French Cooking.

While some critics have suggested Streep might earn an Oscar nod for her role as Julia Child, the reviews for the film suggest she’s the main reason the movie works at all.

Lou Lumenick of the New York Post wrote, “Meryl Streep makes such a tasty and larger-than-life Julia in a nostalgically evoked late-’40s Paris that it’s worth stomaching the pancake-flat sequences with her supposed early 21st-century counterpart, Julie Powell.”

One of my all-time favorite television shows arrives on DVD and Blu-ray this week, just in time for the holidays and to herald in the last season of the complex, brain-grinding series.

Created by Jeffrey Lieber, J.J. Abrams and Damon Lindelof, Lost needs no introduction for fans, and frankly, if you haven’t been watching since day one you really need to step back and start watching from the beginning. It’s a wild and bumpy ride, but it definitely pays off over time with some of the most clever, twisting, turning storylines I have ever seen on television, while also sporting a dynamic cast of actors that sell every moment of the unfolding tale.