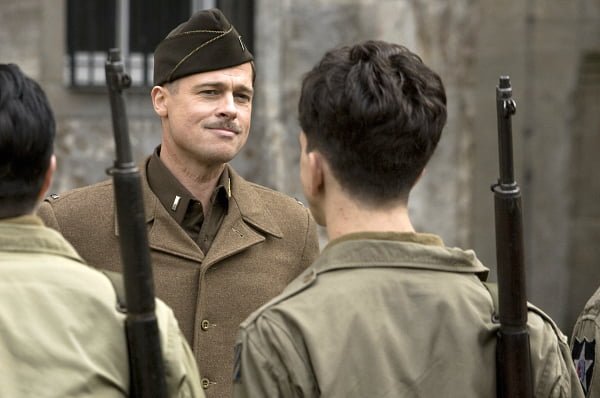 The years seem to pass quickly between director Quentin Tarantino’s projects. After all, it’s been over two years since he debuted the dark, somewhat campy grindhouse film, Death Proof, and it’s been five years since Kill Bill, Vol. 2 came out. Truth be told, Tarantino may be a highly touted director, but since 1992 he’s only released seven films, and that includes the two-parter, Kill Bill.

In Tarantino’s latest bloody extravaganza, Brad Pitt stars as Lieutenant Aldo Raine, the leader of a group of Jewish soldiers sent into Germany to kill Nazis and take down Hitler and his Third Reich. Meanwhile, in France, a woman named Shosanna (Mélanie Laurent) bears witness to the execution of her family by a Nazi leader and vows revenge, planning to find a way to kill Hitler by herself.

Tarantino’s screenplay is a very cleverly crafted work of fiction that cuts into elements of the actual war. With his tight script, which rides high thanks to a great cast, stunning cinematography, and direction that fires off each chapter like a gun blast, Inglourious Basterds is simply a fantastic movie.

Tarantino crafts some intriguing tales, made all the better because he knows how to take a simple story and twist it into something mesmerizing. He is also a master of dialogue, and that’s obvious once more in this film as he works miracles through the most random elements that end up adding rich textures to his characters as the chaotic story unfolds.

Rewriting the history books, Inglourious Basterds is an intense, powerful ride, but it’s also a hilarious film, tinted by blood, rather than drenched in it like some of his other films.

Looking at the basic DVD features, Inglourious Basterds comes with very little unless you’re willing to buy the two-disc special edition or Blu-ray package. Looking at the basic DVD I received, all that comes with it are some interesting extended and alternate scenes, which are worth a glance, plus the film-within-the-film, “Nation’s Pride,” which was directed by actor Eli Roth and is quite brilliantly rendered to look like a real propaganda film from the era.

What happens when a bachelor party gets so wild, so crazy, that you can’t even remember what happened? Worse than that, where do you start looking for the missing groom, who apparently vanished during the festivities?

From the director who brought us Old School, The Hangover is yet another guy’s movie about the camaraderie and the weird times that can follow any drunken, wayward evening.

Imagine Dude, Where’s My Car? but with better cinematography and a higher-calibre cast.

Through the mishaps and the remembered mayhem, the group of guys will of course bond and get into the hijinks that most guys can only dream about.

The film stars an assortment of lesser-knowns, including Justin Bartha, Bradley Cooper, Ed Helms, and Zach Galfianakis with the most well-known star being co-star Heather Graham, who plays Jade the stripper/single mom.

Taking some inspiration from a couple of decades worth of slapstick comedies, The Hangover is a hilarious film with some wild twists and turns along the way. My big complaint is really just that it begins to drag the second the party is over and the guys are trying to figure out what happened. Occasional hijinks lift the action up again, but it’s not consistent enough to make The Hangover all that entertaining. Over a few drinks, and with a room full of friends, it might be a bit more fun though.

Features are decent on the Blu-ray release, but not outstanding. The release comes with a digital copy of the film, an unrated cut, a very funny picture-in-picture commentary on the theatrical version, a very dull gag reel, plus a random assortment of extras that are more or less something you would only ever watch once. Not a bad mix, but I was a little disappointed overall.

Jeremy Piven stars in The Goods: Live Hard, Sell Hard, a comedy about an off-kilter salesman charged with selling every single car at a local dealership. The salesman with his love of selling, drinking, and carousing may be in for a shock though as he finds something new: the love of his life.

While not a stellar comedy, The Goods is not without its moments, but as Keith Phipps of the AV Club wrote, “Funny ideas bubble up from time to time only to disappear into a morass of stripper jokes and desperation.”

Producer Jerry Bruckheimer, the master of explosions and action movies, switched gears this year, debuting his first animated film about a group of guinea pigs trained in the fine art of espionage.

With the voices of Sam Rockwell, Penélope Cruz, Tracy Morgan, Nicolas Cage, Jon Favreau, and Steve Buscemi, the film has an excellent cast. It didn’t earn a lot of praise from critics though, earning just 41% positive reviews from MetaCritic.com.

Ang Lee is what I can only think of as a hit-and-miss director. Sometimes he’s making a brilliant film like Sense and Sensibility, and other times he’s making films like the lame 2003 comic book adaptation, Hulk. So which is it this time? Is Taking Woodstock a hit or a miss, or is it something in between?

Looking to major critics, the film received horrible reviews from a lot of sources, including Stephanie Zacharek of Salon.com who wrote: “It’s harmless enough as a snapshot of a young man’s awakening to the grand possibilities of adult life, but not particularly effective at capturing the spirit, the thrill or even the mud of this culturally monumental event.”