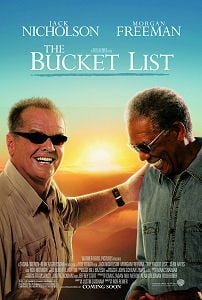 Another week, and the dismal January trend continues in theatres with mediocre films that include Jack Nicholson and Morgan Freeman‘s comedy about living life to the fullest, director Uwe Boll‘s wannabe-Lord of the Rings knock-off, and another lame comedy starring Ice Cube. On the bright side, there are two interesting releases: the supernatural drama The Orphanage and the Veggietales Movie, The Pirates Who Don’t Do Anything.

The Bucket List
This could be what you would call a great film. Starring Academy Award winners Jack Nicholson and Morgan Freeman, The Bucket List was directed by Rob Reiner, and has a pretty clever concept. Nicholson and Freeman play two strangers who meet in a hospital and realize they’re not getting any younger. After all the years life has always gotten in the way and they never were able to do half the things they always dreamed of.

Thus, they decide to write their “bucket list” – a list of things they want to do before they kick the bucket, as it were.

The film is supposed to be an insightful, funny story, but the catch is that it’s packaged in the kind of formulaic script you might expect from any Hollywood film. What makes the entire film worthwhile though is the opportunity to see Freeman and Nicholson in a movie together that lets them basically play off of each other for two hours.

Reviews have been almost entirely mixed with Claudia Puig of USA Today calling it “superficial, manipulative and schmaltzy,” while Jack Mathews of the New York Daily News said it was “mostly a joy ride with good company.” In other words, be prepared for a cheesy movie, but as long as you don’t take it too seriously, it should at least be funny.

In the Name of the King: A Dungeon Siege Tale
Uwe Boll is the master of turning video games into really awful movies, and during the Toronto After Dark film festival I had a chance to not only see In the Name of the King, but listen to Boll talk about his career. It was perhaps one of the strangest nights I have ever spent in a cinema, and it almost exactly reflects the strange, comical mess that is In The Name of The King.

Starring Jason Statham, Ray Liotta, Claire Forlani, Burt Reynolds, John Rhys-Davies, Ron Perlman and Leelee Sobieski, the film strives for the epic qualities of the Lord of the Rings and staggers into absurdity. There are interesting battles, big sets, and some interesting art direction, but it never rises above imitation.

Not surprisingly, especially for a Boll film, In the Name of the King can be entertaining thanks to hilarious performances by Liotta, Reynolds, and cheeseball actor Matthew Lillard. Plus, it has some of the worst dialogue ever put on film – or close to it. I honestly don’t know if the film was intentionally funny or not, but it made me laugh enough to make the two-and-a-half hour running time practically bearable.

The Orphanage
Produced by horror icon Guillermo del Toro, The Orphanage is a chilling supernatural, and psychological, drama about a woman who brings her family to live in her childhood home. Long since abandoned, the family works to restore the home and open it up once again, but Laura begins to wonder if something terrible is lurking within the house, something that is ready to make itself known.

First Sunday
Comedy fanatics may want to check out Ice Cube and Tracy Morgan in a film about two pitiful criminals who try and steal money from a church. There is really nothing else I can say about this film except that it looks awful and Ice Cube is a terrible “actor”.

The Pirates Who Don’t Do Anything: A Veggietales Movie
And finally, for anyone looking for a good kid-friendly film, or just happens to enjoy cartoons about talking vegetables, have I got a movie for you. Based on the popular and absolutely funny Veggietales TV series, The Pirates Who Don’t Do Anything drops our heroes into the past where they must rescue royalty from evil.