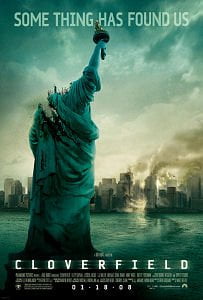 Expectation can be a very cruel thing, even at the movies, and this week would-be fans will finally get to check out the most buzz-worthy film of the last six months: the monster thriller, Cloverfield. Also opening this week is 27 Dresses with Katherine Heigl, and Mad Money starring Diane Keaton.

Cloverfield
Technophiles and nerds across the Internet have been salivating ever since they first saw the trailer for a mysterious film that was simply being referred to by its release date: 1-18-08. Lost producer J.J. Abrams and his team used clever guerilla marketing, random websites, and single images from the film to work would-be fans into a lather before finally revealing that the film would be called Cloverfield.

About the only disappointment in the details that emerged was that the film was not going to be a remake, or a film adaptation of H.P. Lovecraft. Instead, Abrams revealed that Cloverfield was a monster movie for a new era. with the shaky camera footage, styled to look like video shot by people on the streets, the film is set to be a big deal this weekend, adaptation or not.

The story follows a group of people in New York City who watch as something beheads the Statue of Liberty, and devastates the downtown. Fireballs explode into the air, the power dies, and the army appears. In other words, this is your classic monster disaster and shot like the Blair Witch Project.

If you love a good monster flick, or even just a good disaster movie, you’re going to love this movie. There is no question that Cloverfield is just a reworking of classic horror movies, but the critics agree that it’s a very clever reimagining. Joanna Cohen of IGN Movies sums up the experience, “Cloverfield will grab you in its jaws, toss you around like a chew toy for a rollicking 80 minutes… and still leave you panting for more.”

27 Dresses
Always a bridesmaid, never a bride: it’s the saying that some women have come to hate, and it’s the premise of 27 Dresses. Simply put, Katherine Heigl is Jane, the perpetual bridesmaid who realizes one day that it’s time for her to make her happily ever after come true.

This is hardly an original idea for a film, but it’s bound to find an audience with anyone who just wants a cute, sappy movie to enjoy. My vote though is that you may just want to wait for it to come out on DVD.

Mad Money
Get ready for a few good groans, as Diane Keaton, Queen Latifah and Katie Holmes star in a comedy about three women trying to make off with money from the Federal Reserve. The three, all working hard for jobs that doen’t pay much, band together to pull off a heist that could set them for life. And that’s where things go wrong.

There is no question that the casting for the film is brilliant, bringing together three actresses with a range of experience and styles. The sad part is seeing an actress like Keaton, an Academy Award winner at that, dumpster diving for a film like this. As Edward Douglas of Coming Soon said in his review, “it’s somewhat surprising that it’s not nearly as awful as it could have been, but tragic to watch Diane Keaton’s career continue its path into embarrassing roles that undermine her acting talent.”