DVD Tuesday: ‘Away From Her’, ‘Reservation Road’ 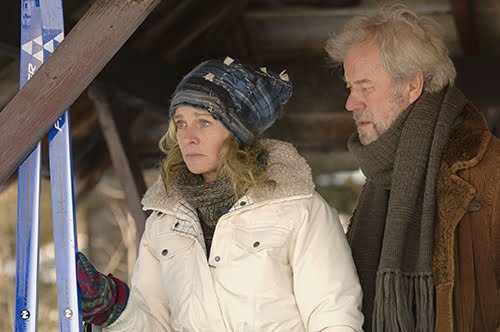 Feed your film addiction this week with the latest dramas arriving on DVD, including actress-turned-director Sarah Polley‘s acclaimed movie Away From Her, the dramatic thriller Reservation Road, and a film about a few life-changing months for dramatist MoliÃ¨re. Not quite what you had in mind? Then forget about intelligent drama and dive into a fountain of blood with the dumb but popular horror film, Saw IV.

Away From Her
Canada’s own Sarah Polley made her directorial debut with this adaptation of an Alice Munro novel, and the result is a film that has been praised by critics and nominated for a number of awards. Gordon Pinsent and Julie Christie are Grant and Fiona, a married couple who must face uncertainty when Fiona’s battle with Alzheimer’s disease progresses to the point where she must go to a nursing home. Away From Her is a touching film that gives a fresh view of life in the golden years, and what love really means to a couple.

Looking at the accolades that have been heaped on the film, this is one of the most critically acclaimed films to come out of Canada in years. It’s also a major turning point for Polley, who up until now has been most well-known for her acting roles in films like The Sweet Hereafter and Go. “Sarah Polley’s sad, wise and simply dazzling directorial effort beams with warmth,” said Amy Biancolli of the Houston Chronicle.

It is also worth mentioning that while Christie has received a lot of the acting praise, even winning an award recently from the Golden Globes, Pinsent’s moving performance should not be missed.

Reservation Road
Joaquin Phoenix, Jennifer Connelly and Mark Ruffalo star in this film about two men who struggle with the reality of a horrible accident. Phoenix plays Ethan, a man who loses his son one night to a hit and run driver who disappears into the night. As the police hunt for the killer, Ethan does everything he can to find the killer. The killer happens to be Dwight, played by Ruffalo, who drove off in sheer panic on the night of the accident and now finds himself in the middle of an investigation that is getting closer to finding him.

The film is noteworthy for its performances, but as Peter Hartlaub of the San Francisco Chronicle says, “There’s a problem when you make a film so dark that Hotel Rwanda looks like a crowd-pleaser – especially when the story asks filmgoers to leave their reasoning skills at home.”

MoliÃ¨re
Being ever so slightly reminiscent of Shakespeare in Love, MoliÃ¨re is the imagined story of how Jean-Baptiste Poquelin become known as the famed French satirist MoliÃ¨re. Having failed as an actor, Jean-Baptiste is down on his luck and waiting in jail as his creditors circle like vultures. He is only saved when the wealthy Monsieur Jourdain agrees to pay off the creditors in exchange for lessons on the workings of the stage.

Jean-Baptiste agrees, but must pretend he is merely a tutor, even as he falls for Jourdain’s wife, and must withstand her constant barbs and comments. As the film shows us, this is how MoliÃ¨re will move on from merely being a failed actor, and become a great dramatist.

The film is both funny and touching, although more than a few critics have commented on how the film lacks imagination and does not even aspire to half the wit of its title character.

Saw fanatics will eat it up, but for the rest of us, I leave you with Owen Gleiberman’s astute comment from his Entertainment Weekly review. “This fourth entry in the mutilate-yourself-or-die series joins what may be the worst genre of the decade: the lamely ‘sympathetic’ serial-killer backstory.”