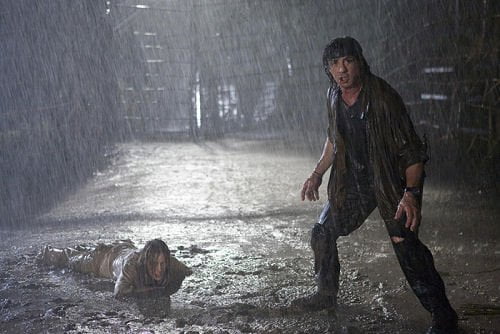 Last weekend a monster movie took over the cinemas and claimed one of the biggest January openings of all time. The film was Cloverfield, but can the monster keep audiences in theatres, or will Sylvester Stallone‘s return as Rambo draw box office blood? Audiences will decide this weekend, but if neither film is quite your style there are a few alternatives, including the thriller Untraceable, the dance-driven drama How She Move, the spoofy Meet The Spartans, and a concert documentary that lets you enjoy U2 in 3D.

Rambo
The idea that someone decided to do a Rambo sequel, starring 61-year-old Sylvester Stallone, should be a laughable concept. It has been 20 years since the last Rambo movie, and perhaps age shouldn’t matter, but it still seems impossible to take a film like this seriously. It is equally hard to imagine the film being worth watching since Stallone is not only the star – he also wrote, directed and produced the film.

Stallone is admittedly a pro at this sort of thing – he wrote and directed the hit Rocky Balboa – and he has also written a number of the films he has starred in, including all of the Rambo films to date. There is still something to be said for outside input for a revival like this, and in making an old guy like Stallone look like a hero.

As far as the story goes, we catch up with John Rambo on the Thai-Myanmar border as a group of human rights activists ask for Rambo’s help in getting down the river to a group of refugees. Rambo gets them there safely, but just two weeks later he is visited by a pastor who says that the missionaries are missing. As it turns out, the activists are being held captive and it’s up to Rambo to jump in and save the day.

Since there is a total review “blackout” in effect on Rambo, a bad sign unto itself, there is no way to tell if the film will be worth checking out. My vote would be to wait for the DVD since I’m expecting a total disaster of an action movie.

Untraceable
Speaking of disasters, Diane Lane and Colin Hanks star in Untraceable, a cyber-thriller about a killer on the loose who connects captives to a system that kills them based on how many people are watching over the Internet. Lane plays the role of Special Agent Jennifer Marsh, who is working to catch the killer before they can strike again.

Personally, I would almost go out and see anything starring Diane Lane (I will even admit that I enjoyed her in Under the Tuscan Sun), but Untraceable looks utterly toothless. It takes a concept that sounds vaguely interesting and attempts to wrap a whole storyline around it without diving into true suspense, or more than a half-believable premise.

Based on a number of reputable reviews, which offer good and bad points on the film, Untraceable is at worst a not-half-bad thriller you might enjoy, but you will have to ignore a few flaws. Michael Rechtshaffen of the Hollywood Reporter sums noted that “Untraceable is highly watchable, anchored sturdily by Lane’s convincing performance.”

How She Move
Described as a moody coming of age tale by the filmmakers, How She Move is a Canadian drama about a girl who joins a male dance crew as a step to getting out of her lower class lifestyle with tuition for private school. Starring Rutina Wesley, and a cast of mostly unknown actors, the film takes a routine story and loads it up with great performances, eye-popping choreography, and a smart story.

Meet The Spartans
In the tradition of Epic Movie, and from some of the minds behind that mess, Meet The Spartans is a mash-up spoof that mocks everything from 300 to Spider-Man and Britney Spears and stars a smattering of oddball actors, like Kevin Sorbo and Carmen Electra. Writer/director/producers Jason Friedberg and Aaron Seltzer, who also wrote and directed Epic Movie and the Scary Movie franchise, pull triple-duty again, and are sure to taint it with the usual lame jokes that never pay off.

U2-3D
Lastly, in select theatres this weekend you can see U2 as you’ve never seen them before – on a gigantic screen in 3D. The concert documentary follows the group on their Vertigo tour and Richard Roeper, of Ebert & Roeper fame, called it “perhaps the most technologically pristine 3-D concert film ever made.”