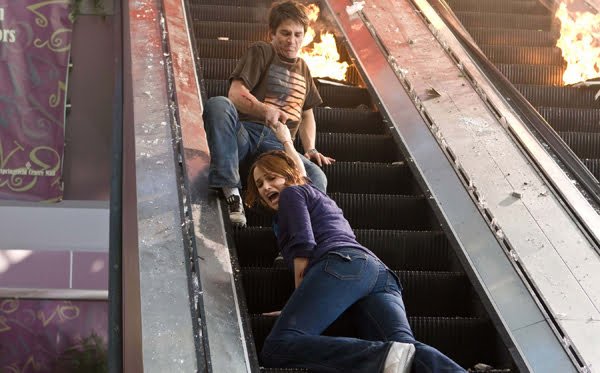 Happy New Year, everyone. The holidays are safely behind us now, and the epic pile of new releases that came out at the end of 2009 is slowly starting to dwindle. There are a few notable new films on DVD and Blu-ray though, including the wonderfully silly, The Final Destination, the animated sci-fi adventure, 9, not to mention the campy Jennifer’s Body, and the animated movie, Cloudy With A Chance of Meatballs.

After three films, with essentially the same plot, you would think that the Final Destination series had run its course. Apparently the producers don’t see it the same way though, probably because of the whopping wads of cash they’ve pulled in from the films, so here we are once again with a story about teenagers trying to escape their impending doom. The big difference? This time, they’re going to get their throats cut in 3D.

Actually, it was 3D in theatres. On DVD and Blu-ray it’s some beleaguered reddish-blue facsimile, which doesn’t work for me, but it’s there if you’re desperate for that extra added, bloody bang.

Bobby Campo leads the film as Nick O’Bannon, a young guy who has a premonition that he and his friends are about to die courtesy of a fiery disaster at the local race track. Convincing his friends that they have to leave, they all make it out just in time before Nick’s premonition becomes reality.

Taking a whole new cartoonish approach, where you can practically see the old Acme logo stamped on every malfunctioning device, The Final Destination stars a relative assortment of unknowns, but that doesn’t take away the film’s ridiculous joy. In fact, it probably enhances it, since it’s a lot more fun to watch Hollywood nobodies biting it, than say, somewhat well-known actors.

On Blu-ray, the film comes with a number of deleted scenes, two alternate endings, and deconstruction featurettes on some of the major death scenes. Overall, grossly fun and watchable, but not worth actually buying.

Set in an apocalyptic version of Earth, 9 is what you would call a steampunk story where rustic, ancient-looking technology accomplishes the most fantastic things. At the heart of the story are nine ragdoll robots, each with a number on their back, fashioned by a mysterious inventor who has died with the rest of civilization and left his creations to try to figure out what they’re supposed to do now.

Hiding in the ruins of a church, the small group has seemingly had a tough time of it when 9 shows up, unsure what exactly is going on. His appearance leads to questions, and issues, as one of their brightest gets captured by a cat-like robot, which appears to be one of the only other creatures in the city. As 9 pushes to go rescue their lost comrade he discovers that 1, the leader of the group, has no intention of taking that risk, but that won’t stop him from finding their friend, while searching for answers to their very existence.

Starring Elijah Wood as 9, plus the voice work of John C. Reilly, Jennifer Connelly, Martin Landau, Christopher Plummer, and Crispin Glover, Shane Acker’s film is remarkable in many ways. The film is beautiful, sometimes even mesmerizing in it’s design, and it has a dingy but wonderful cinematic style with characters that look and seem quite lifelike.

All I can say is that, like a lot of producer Tim Burton’s other work, both as a producer and director, story did not play a big enough part. Acker should have fleshed out the story more, and made sure the script worked, but if you know Burton’s work, you’ll recognize that familiar sensation of great visuals laid over an all-too-simple storyline.

The features in the Blu-ray package are good, but not outstanding, aside from the interesting commentary by Acker and his key team, and more importantly, Acker’s original short film.

Academy Award-winning screenwriter Diablo Cody has an intriguing sense of style. In her film Juno, she got into the mind of a high school girl struggling with pregnancy, and now in Jennifer’s Body, she’s exploring a different teen angle as a beautiful girl deals with her new urges to hunt and eat the boys at her school.

Thankfully, the only thing that connects Cody’s last film to Jennifer’s Body is the whole high school setting, and the way she seems to be able to write dialogue that sounds right when it comes out of Megan Fox’s mouth. While I’m curious when Cody will move on to a project that doesn’t include teenagers, she is good at what she does, and there are more than a few moments where it all works quite well for this particular film.

Set in the small town of Devil’s Kettle, Fox plays Jennifer, the teenage diva who has sex on the brain, and drags her best friend Needy, played by Amanda Seyfried, to see her new favorite band, Low Shoulder. As we quickly see though, the band isn’t really there for the fans, they’re actually looking for someone to help them, and Jennifer ends up being the unsuspecting victim.

Whisked away from the bar, which ends up burning to the ground, killing numerous people in the process, Jennifer disappears with the band while Needy has to find her own way home. Hours later, Jennifer shows up at Needy’s home though, only now she is covered in blood, acting strange, and ends up vomiting black goo all over the kitchen floor.

From that point on, it’s safe to say that Jennifer isn’t quite the same as we see her seducing guys from her school before she freaks out and starts gnawing on their innards. Meanwhile, Needy is trying to piece together what’s really happening to her friend.

Covering lots of ground we’ve seen before, with retro panache but very little scares, the film is fairly entertaining, and I think Fox and Seyfried make a good pair in this bizarre teen tale of cannibalism. Director Karyn Kusama is frankly not up to the task of really making Cody’s script amaze us or frighten us, although it can also be said that the script also plays things way too safe. Early on we know exactly where we’re headed, and it goes without saying that it will wrap up in much the same way as these films always end.

All things considered, I still enjoyed Jennifer’s Body for what it is – a light and funny quasi-horror film that takes joy in random, oddball moments, as when one of the random prey eye Fox’s character with a mix of joy and disgust.

Likewise, Fox has a couple of very good scenes which maybe prove she can eventually move on to roles that deal with more than just her complexion or her curves, and I think she also aptly proves that she can lead a film with her charisma alone.

Based on the popular children’s book, Cloudy With A Chance of Meatballs is an animated movie about an inventor and a weather girl who are trying to solve the riddle about the falling food. You see, rather than rain falling from the sky, a small town is experiencing the unexpected phenomenon where everything from candy to, yes, meatballs, is dropping out of thin air.

Starring the voices of Bill Hader, Anna Faris, Bruce Campbell, Mr. T., James Caan, and Adam Samberg, Cloudy With A Chance of Meatballs fun that you can safely enjoy with the whole family. As Alonso Duralde of MSNBC wrote, the film is “overstuffed with enough sight gags to delight children while throwing in healthy dollops of wordplay and absurdist humor to keep their adult chaperones entertained as well.”