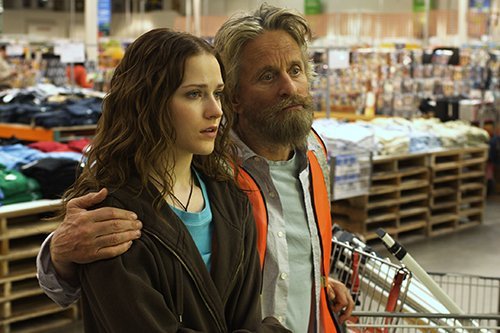 Michael Douglas does his best deranged father impression this week in King of California, one of a hand full of notable DVDs arriving on store shelves this week. Other new releases include The Invasion starring Nicole Kidman, Pride & Prejudice with Keira Knightley, and Cuba Gooding Jr. in Daddy Day Camp.

King of California
Michael Douglas channels some serious old cook vibes as Charlie, a father who has been in a mental hospital for the last two years, and has to readjust to life with his 16-year-old, Miranda (played by Evan Rachel Wood). For Miranda, who has been living on her own for two years, having her father back in her life isn’t exactly a good thing. She has been supporting herself for the last two years, she works at MacDonald’s, and her father’s erratic moods and behaviour is just too much for her. Especially since Miranda watched, years ago, as Charlie dangled from a chandelier.

With Charlie’s return however, Miranda finds herself sucked into his impossible life, as he drags her along on the search for a lost treasure that he has been researching from the mental hospital. As Miranda and Charlie scour for clues, the two rediscover their relationship as father and daughter. Wood and Douglas play two conflicting characters, who share more in common than either of them seem to want to admit.

There really is no way to watch this film without getting sucked in to these two disparate, conflicting, and yet caring characters. Douglas plays a random, troubled man with as much vision as flaws, but as always, he is totally charming. Wood on the other hand plays the straight-woman to Douglas’ insane act. She’s the reserved, hard-worker and you can’t help but feel her pain as she deals with her oddball father.

King of California has more than a few laughs, but it is really all about the drama and the relationship between these characters. Douglas and Wood are great together, and while the story could have been a bit more original, the caper is really only an element of their tale.

The DVD for King of California only offers a couple of features, including a making-of segment, outtakes, and a full commentary with writer/director Mike Cahill and a few people from his team. Unfortunately, none of the features are very interesting compared to the film, and the commentary is about as dull as these things get. Still, the film is well worth checking out, and it’s bound to leave you feeling at least a little touched yourself.

The Invasion
If I had to pick one film from the past year that I hated above all of the others, it would have to be The Invasion. Starring Nicole Kidman and Daniel Craig, the film is a reimagining of The Invasion of the Body Snatchers without the suspense, or science fiction roots.

Kidman is Carol Bennell, a psychiatrist who discovers that a virus is working its way through the population, and people are changing after they are infected – becoming empty shells of humanity without any emotion. Worse than that, all of the infected are banding together and hunting down anyone who hasn’t been changed, and Carol and her son don’t know what they can do to escape.

Where the idea of turning this story into a psychological thriller might have been great, the producers apparently didn’t like how it was turning out and some critics have suggested that the original director was canned before the film was completed. It would also seem that the thoughtful storyline the original director was building was merged with big action sequences, to give the film some kind of juice at the box office. But the two styles just don’t fit together, and The Invasion comes off feeling like an incomplete thriller, with neither a good concept, depth, or real thrills, and the action is totally tacked on.

Other Releases
Also out on DVD this week are three noteworthy films that received a lot of critical praise: Shake Hands With The Devil, Pride & Prejudice, and The King of Kong: A Fistful of Quarters. The sixth season of Curb Your Enthusiasm also arrives, and Cuba Gooding Jr.’s latest horrible comedy, Daddy Day Camp.