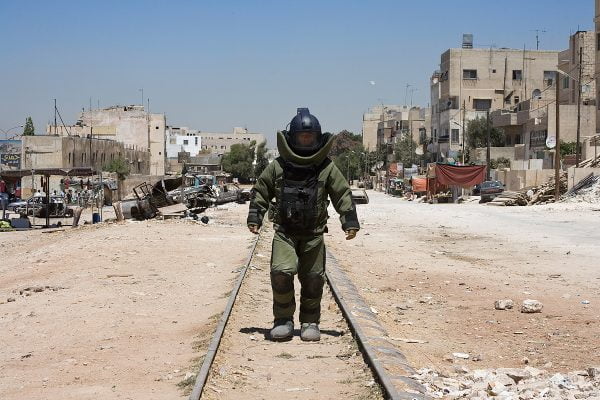 Coming out this week on Blu-ray and DVD, director Kathryn Bigelow‘s The Hurt Locker debuts after months of critical acclaim, while Sam Rockwell stars in the minimalistic sci-fi drama, Moon. Other new releases include Big Fan, Fame, and Halloween II.

In this dramatic thriller from director Kathryn Bigelow we go behind the scenes on the streets of Baghdad where a team of three technicians work day by day at disarming bombs and explosives. Known as the Explosive Ordnance Disposal squad, the team is both surprised and nervous when the unflinching, but seemingly reckless Staff Sergeant William James, played by Jeremy Renner, takes over for their recently fallen leader.

The job calls for strict protocol, and even stricter safety measures, but their new leader seems to have a style all his own and despite his miraculous record, they’re afraid that it’s going to get them all killed before their tour of duty ends in a mere 38 days.

Also worth mentioning is cinematographer Barry Ackroyd, who previously worked his magic in The Wind That Shakes The Barley, not to mention film editors Chris Innis and Bob Murawski, and screenwriter Mark Boal.

Led by director Bigelow and her amazing cast and crew, this team of filmmakers has created one of 2009’s most relevant and visceral films. It is a mesmerizing, tense, and evocative movie that is stunning, and rich with realistic, subtle touches.

Although Bigelow is probably most well-known for directing Point Break all the way back in 1991, she has taken many of the elements that made that such a great action film and reworked them to work in this drama. Using a similar sense of style and passion, Bigelow invests her leading men, and particularly her lead character, with bravado that is impossibly larger-than-life, and yet completely believable.
Moving and edgy, the film is most watchable because it seems to revolve so effortlessly around these three very different men, all stuck dealing with the same issues in their own way.

Stepping into Oscar season, it will be interesting to see how Bigelow’s wonderful film fares next to the P. T. Barnum circus that is James Cameron’s epic Avatar, but I expect Renner will at least step away with a well-deserved Oscar nomination, if not a win.

Moon stars Sam Rockwell, appropriately enough, as Sam, an astronaut working on a solo mining operation on the moon. Stuck in the sterile environment, where he can only communicate with his family through taped messages, Sam is near the end of his trip when he starts to experience terrible headaches and hallucinations. After an accident, and strange experiences, Sam meets what he believes to be a younger version of himself, who says he has just arrived for the same three-year mission Sam is about to complete.

Trying to deal with the turn of events, Sam’s only companion is the computer known as Gerty, voiced by Kevin Spacey, as he tries to discover whether he is losing his mind or if something much stranger is going on.

With so few smart, intelligent sci-fi films out there, Moon is a breath of fresh air. This is a vivid, rich film that languishes in every detail, working its minimalistic angle to full effect.

As writer Christine Estima said on her blog, “Moon is a very quiet and insular film that plays tricks with your head. Sam Rockwell essentially carries this entire film, with Kevin Spacey voicing the benevolent but cryptic computer who takes care of him on the surface of the moon for years at a time.”

Best known as the screenwriter for the fantastic breakout film, The Wrestler, Robert Siegel has stepped up to write and direct what is essentially an odd and yet mesmerizing story of one loser sports fan, obsessed with his home town team, and headed for disaster.

Patton Oswalt is Paul Aufiero, a 35-year-old New York Giants Fan working as a parking-garage attendant who still lives at home with his mother. Returning home each night, his one hobby is to call the local radio station and praise his favorite team, while bashing anyone who might not share the same opinion.

When he gets the chance to meet the team’s iconic star, linebacker Quantrell Bishop, Paul’s life gets flipped upside down as one little mistake leads to the star player beating Paul into a three-day long coma.

Once he recovers his family urges him to have some sense and help the police lay charges, but Paul refuses to listen because a conviction could ruin the team’s chances during the season.

The film soars thanks not only to Oswalt’s convincing and sometimes even amusing performance, but also because of Siegel’s deft hand with dialogue, and characters.

For anyone who grew up in the 80s, you’ll surely remember Fame. You know, “Fame, I’m gonna live forever, I’m gonna learn how to fly… high!”

Now that it’s been long enough for people to forget the original film and television series, someone has decided to remake the film for a whole new generation, but the results have not fared so well this time around.

Lastly this week, Rob Zombie is back in the director’s chair, returning to the Halloween franchise so Michael Myers can have one more go at offing a few more teenagers. Once again Tyler Mane plays the iconic fiend, following the events of the first film directly and looking in on how Laurie, played by Scout Taylor-Compton, is doing after her last ordeal.

Putting it simply, Zombie’s remakes do little more than put a little extra blood in the same, old tired slasher films we’ve seen since the original Halloween came out. That said, it is getting slightly more favourable reviews than its predecessor.