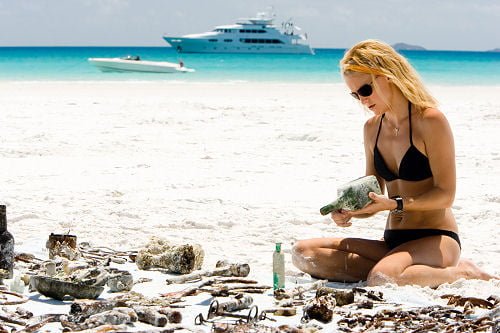 Three films arrive in theatres this weekend that want to make you laugh, but how many of them will actually succeed? Whether you take your chances with the romantic-comedy-adventure film Fool’s Gold, check out Martin Lawrence‘s latest attempt at comedy, or follow Vince Vaughn on his comedy tour across America, you may still come up short on laughs. Oddly enough though, the big action film of the week, In Bruges, is not only getting some big buzz with critics, but it also has more than enough laughs to make up for all the other films combined.

In Bruges
From the mind of playwright-turned-director Martin McDonagh comes this strangely compelling tale of two hitmen left to their own devices in the small town of Bruges (which is apparently pronounced “broozh”), Belgium. Starring Colin Farrell and Brendan Gleeson as the two hitmen, and Ralph Fiennes as their boss, In Bruges is hard to pin down, but it’s rife with black comedy and violent action.

Ordered to detour to Bruges after a rough job in London, the two men are told to wait for the boss’s call. Until then, all they can do is see the sights and explore the local flavour. On the one hand there is Ray, played by Farrell, who hates Bruges and is having issues getting over the events in London. And on the other there is Ken, played by Gleeson, who quickly falls for the charms of the city. Their temporary vacation comes to a halt however when the boss finally calls, and the duo are forced to fight for their lives.

Screened during this year’s Sundance Film Festival, the film has received solid reviews, and it is also refreshing to see a new director playing their hand in the action-crime genre.

Fool’s Gold
Writer and director Andy Tennant, who also brought us Hitch and Sweet Home Alabama, delivers another romantic comedy, but with a little action thrown in for good luck. The film stars Matthew McConaughey and Kate Hudson as a divorced couple who find themselves thrown back together in the hunt for piles of hidden treasure.

On the one hand, I’m a sucker for treasure films, and I even like the idea of mixing the genre up with a romantic comedy. The problem is that the film feels like dozens of other movies we have all seen before. I even find myself looking at these two stars and all I can think of is the film Out of the Blue, which had a similar hunt for treasure.

The final nail in the film’s coffin is the number of critics who are calling Fool’s Gold forgettable. In Hitch, Tennant had a great cast that made the otherwise obvious script seem fairly original, but neither McConaughey nor Hudson are able to do the same with Fool’s Gold.

Welcome Home Roscoe Jenkins
Part of me wants to see Martin Lawrence in a film worth talking about, since so many of his films come off sounding like dares rather than watchable cinema. Even with co-stars James Earl Jones, Cedric the Entertainer, Michael Clarke Duncan and Mo’Nique, there is a taint to Lawrence’s work that always suggest his films will somehow suck.

In Welcome Home Roscoe Jenkins, Lawrence is RJ Stevens, a talk-show host who heads home with his perfect, superstar fiancÃ©e for his parent’s 50th wedding anniversary. Trying to prove himself to the family is harder than he expected though, and old habits die hard as RJ gets into trouble at every turn.

There are very few reviews available yet to try to decide how this film turns out, but with the Undercover Brother director Malcolm D. Lee at the helm, and Lawrence as the star, I’m inclined to suggest that you save this one for a rainy day rental.