DVD Tuesday: ‘Whip It’ and ‘Surrogates’ 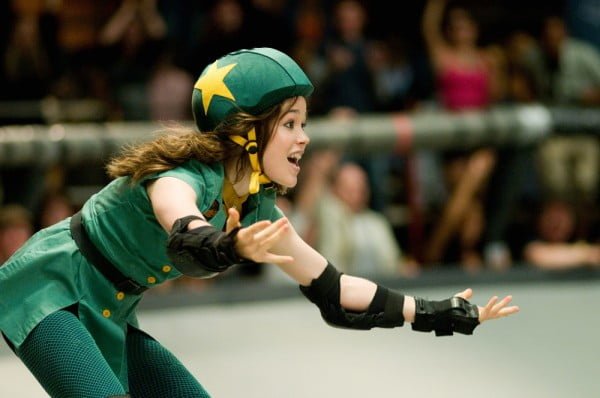 Ellen Page in Whip It

New this week on DVD and Blu-ray, Ellen Page stars in the action-packed dramedy Whip It, and Bruce Willis stars in the sci-fi actioner Surrogates. Plus a look at Prom Night in Mississippi, The Boys Are Back, and Saw VI.

In Drew Barrymore’s first film as a director, Ellen Page stars as Bliss, a new player in the often bruise-inducing sport of roller derby. Although Bliss is being pressured to enter beauty pageants by her mother, played by Marcia Gay Harden, that’s not the kind of thing she wants to do with her life. The trouble is, if her mother ever does find out what her daughter is doing in her spare time, Bliss may never get to do what she really loves again.

With infrequent support from her loving father, played by Daniel Stern, who has a hard time standing up to his wife, Bliss secretly becomes a star roller girl. In the midst of this secret life, she also finds herself falling for a boy, played by Landon Pigg, who she meets at a roller party.

Debuting at the Toronto International Film Festival, Whip It begins as a by-the-numbers dramedy, where most of the digits peek through the background scenery. From the start it is pretty easy to spot the film’s trajectory. You can see where Bliss is going before she even really starts the journey, but there are surprises along the way.

The story comes down to playing off some very common story elements, while using a few character archetypes. You could call them stereotypes, but I think Whip It is more clever than that, and uses these elements to tell a wonderfully engaging story.

Between the script by author Shauna Cross and Barrymore’s direction, the film pays off at almost every turn, and although it’s been promoted this way from the start, it is great to see a story with such strong and interesting female characters, played by such a diverse group of talented women.

Overall, Barrymore’s film is somewhat flawed, but the energy she invests in the film pays off, and Page is the ideal star to lead this romp through one of America’s lesser-known sports.

For those of you considering picking up the DVD, try not to be disappointed, but there are not many features at all aside from a few deleted scenes and an alternate opening. The Blu-ray package comes with a few extras, however, including a commentary track, digital copy, and a featurette on author Shauna Cross.

There are some amazing possibilities rumbling away inside of director Jonathan Mostow’s Surrogates. Just imagine a future where anyone with enough money can plug themselves into a machine that will allow them to control a robotic doppelganger of themselves, which they can send off into the world to work, live, and experience life without fear of getting hurt or sick.

Last of all, I can’t help but feel that this could have been a singularly poignant film had the world been changed more to reflect the fact that it was now made for surrogates, not humans. Why do radio and television exist in the world when it could just be piped into a users head? I could see the world being a much more troubling place for a human, which would have made the film a lot more interesting as well.

While I didn’t hate Surrogates, it’s not the kind of film I’d recommend as a purchase. It’s simply a half-baked sci-fi story that needed to be a lot more daring. It is worth a rent though, as long as you go in with sufficiently low expectations.

In the documentary Prom Night In Mississippi, we look in on the town of Charleston, Mississippi which, until 2008, held two separate proms – one for white students, and one for black students. Following former Charleston resident Morgan Freeman, who offered to pay for a joint prom in 1997, the documentary by Canadian filmmaker Paul Saltzman shows all of the problems in making the first prom, nearly a decade later, come to be.

Clive Owen stars in director Scott Hicks’ The Boys Are Back, about a father who has to deal with single-parenthood after his wife, who had two kids from a previous marriage, suddenly passes away. Co-starring Nicholas McNaulty and George MacKay as his young step-sons, the film is a funny, dramatic story of finding a new life, after everything you know has changed.

Last, and certainly least of all, there is the latest Saw sequel. This one is pretty cut and dry; either you’re a Saw fan (still) or you’re not. Personally, I haven’t been a fan, and I have a hard time understanding why anyone has been interested in the last four (or five) movies, but to each their own.