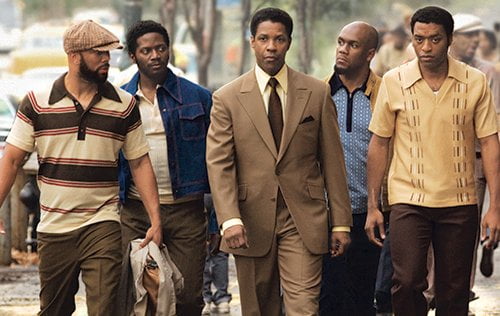 Take a trip down New York’s criminal memory lane this week, with Denzel Washington and Russell Crowe in a tale of a drug lord who seizes control on the streets of Harlem. Also arriving this week, George Clooney stars in the drama Michael Clayton, and a documentary explores the life of Kurt Cobain through audio and an almost dream-like video collage.

American Gangster
Screenwriters have created more than a few legendary characters throughout the decades, but there are few fictional bad guys with the charm and pure epic evil qualities as the real life Frank Lucas. Taking to the streets of Harlem in the 70s, Lucas went from being a driver for a mob boss to controlling the inner-city drug trade and running all of the classic Mafia-types out of business.

With Denzel Washington playing Lucas, and Russell Crowe as the straight-as-an-arrow cop Richie Roberts, American Gangster is a classic crime drama with an exceptional cast. Co-stars in the film include Josh Brolin, Armand Assante, Cuba Gooding Jr., and RZA, Common and T.I., all with performances that do great justice to the story.

Where American Gangster falters is in the mix of multiple layers of story that never seem to fit perfectly together. The performances are memorable, Crowe is particularly fantastic, and Lucas’ story is actually astonishing, but it never achieves the epic quality of similar films like The Departed, or even Heat.

The film is still a fantastic tale worthy of a spot in your collection of crime dramas. The DVD release has an additional 18 minutes of film, which includes an extended ending, plus a number of interesting featurettes, with a commentary from director Ridley Scott, and writer Steven Zaillian. All of the features are entertaining, especially in showing the attention to detail in almost all regards, although there are few that will entice you to watch them a second time.

Michael Clayton
George Clooney might be one of Hollywood’s greatest living actors, and he proves that once again in this smart drama as the legal fixer, Michael Clayton. Called in to help high profile clients who need to sweep troubles under the carpet, Clayton is nearly bankrupt and facing what is essentially a gigantic mid-life crisis when he is called in to fix a mess that has developed with one of his friends.

Arthur Edens, played miraculously by Tom Wilkinson, is in the middle of one of the firm’s biggest cases when he essentially loses it in a meeting with both parties. Michael discovers that the problems in the case are essentially a matter of conscience, which have dragged Arthur into trouble with company CEO Karen Crowder, played by Tilda Swinton. As a result, two hitmen are called in to deal with the situation.

What stands out about Michael Clayton is the way the film never seems to falter into the territory of the standard legal thriller. Clooney and the entire cast walk a fine line in their performances, and the story covers uncommon ground with remarkable skills, especially in some of the most intense scenes.

Easily one of my favorite films for 2007, this is a must-see film, especially for Clooney fans.

Kurt Cobain About a Son
An incredibly haunting documentary that combines over 25-hours of audio interviews with Kurt Cobain with an alternative soundtrack, and random, but mesmerizing video. Combining songs by the likes of David Bowie, Iggy Pop, and Leadbelly, the film is a meditation on Cobain’s thoughts about his life that feels like more of an art film that any kind of documentary. It is also both strange and eerie to hear Cobain talking for almost two hours, but to never see him except in the final still photographs before the credits.

This odd, sad, and moving film is not meant for everyone, but for those who want a better appreciation of Cobain, or are just looking for a musically-influenced film, this is well worth a watch.

Also arriving this week:
Margot at the Wedding features another twisted family story from writer/director Noah Baumbach, with Nicole Kidman playing the title role of the oddball writer. While visiting her sister, and meeting the new fiancÃ©, the family laundry gets put out on display as Margot tries to deal with her unhappiness. The film lacks the charm and utter wit of Baumbach’s The Squid and the Whale, with far too many scenes that are almost utterly unbearable.

In the Valley of Elah stars Tommy Lee Jones as a soldier searching for his missing son, and finds himself working with a civilian cop, played by Charlize Theron. Directed by Canada’s Paul Haggis, the film is a commentary on war, and the pain of those on the battle fields.