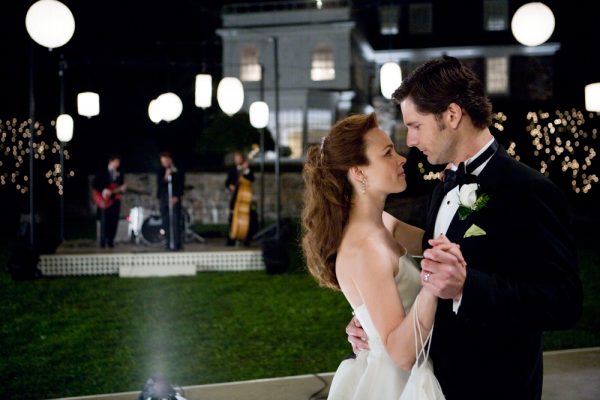 Rachel McAdams and Eric Bana in The Time Traveler's Wife

Eric Bana and Rachel McAdams star in the adaptation of Audrey Niffenegger’s popular novel about a man with a genetic problem that causes him to inexplicably travel through time, visiting different points in his own life.

You did, in fact, read that correctly. With a plot that sounds like a 1950s sci-fi, The Time Traveler’s Wife is a strange tale that’s been wrapped up in the conventions of a modern love story, and yet it’s most definitely a little far out.

Directed by Robert Schwentke, and produced by Brad Pitt, the film follows Clare, played by McAdams, as she tries to build a life around a man who is often not around. Meanwhile Henry, played by Bana, can’t control where he goes as he travels across the years of his life, meeting Clare at different points in her life and then disappearing again.

Beautifully filmed and edited, with a story that is both entertaining and intriguing, The Time Traveler’s Wife is unique and frequently compelling. Bana and McAdams are also very good together, giving credence to this stilted relationship, even if a lot of the film is frequently hard to believe.

And that’s the film’s biggest problem; many of the events in the film are simply too hard to believe. Maybe we can accept that a woman would pine her life away over a man who vanishes for days, sometimes weeks on end – maybe – but can we accept that he acts like he’s powerless? Or that he feels he can’t change anything? What about the fact that he arrives naked each time he travels, and then has to rush around finding clothes?

It’s a loopy concept, and although every detail is interesting, it adds up to a troubled story that makes no sense when you put the pieces together. The creepy factor is also very evident, and does not help the story, as when an adult and naked Henry meets a young Clare.

It feels unfortunate to completely discredit The Time Traveler’s Wife, because it is quite original, but the transformation from book to screen obviously was a tough one, and like Henry it feels like it simply got lost in its travels.

For the past 25 years the Coen brothers have been making comedies and dramas that have challenged us and pushed the envelope on stories that are consistently stranger and more dramatic than we are used to seeing. And although their resumes are highlighted by award-winning films like Fargo, and No Country for Old Men, their lesser-known works are no less amazing, including Barton Fink, The Hudsucker Proxy, and O Brother, Where Art Thou?

For their latest aptly titled film, A Serious Man, the writing and directing duo have once again blended genres to produce a film that is equally a comedy as much as it is a compelling drama.
Truth be told though, when you walk out of the cinema, the indelible memory you leave with is probably going to fixate on the dramatic end of the spectrum.

Set in 1967, the film follows the pitiable physics professor Larry Gopnik, played by the very talented Michael Stuhlbarg, who is having a hard time with nearly everything in his life. While his son is secretly listening to Jefferson Airplane at Hewbrew school, Larry is dealing with a small issue at school, which quickly leads to more troubles.

Stuck with his out-of-work brother Arthur, played by Richard Kind, his life takes a further nose dive when his wife Judith, played by Sari Lennick, announces that she’s leaving him for another man – namely their friend Sy Ableman (Fred Melamed).

As the film circles some kind of meaning, and Larry’s problems escalate even further, the Coen brothers reveal interesting details in his life, but really have no intention of wrapping things up neatly for us. A Serious Man works instead as a closed-off riddle, offering vague glimpses into a beyond that we can’t understand, while never giving us a reference as to why any specific details might be important.

In other words, it’s challenging cinema of the very best kind.

For a drama though, the film is no less hilarious, with asides and moments that are as funny as the rest of the film is, well, serious. It’s also an incredibly religious film, rich with every aspect of Judaism, and all of the questions that a devout follower might ask of God as hell rains down around him.

Most telling, however, is the film’s opening and closing. While I’ll leave the latter for you to discover yourselves, I think the opening, set in a 19th century Polish village, reveals a lot about the story’s heart. It’s also a perfect example of how the Coen’s can take disparate but connected elements and make them all perfectly part of a single thread.

Even now, I’m still amazed by the complexity of this film, which will sadly be a hard sell for most audiences, but definitely deserves the attention from film fanatics.

Tom Hardy stars in the disturbing tale of Michael Peterson, a young man who went to prison for an attempted armed robbery, and turned into a man the press would call, “the most violent prisoner in Britain.”

For the gaming fans out there, Warner Bros. has developed a seven-part animated series based on Microsoft’s hugely popular Halo games. Beginning with the episode, “The Babysitter,” the series follows Master Chief, voiced by David Wald, and a number of Spartans in the midst of the conflict with the Covenant.

And in the latest franchise spinoff from the creators of the Stargate television series, a group of soldiers, scientists and civilians find themselves transported to the other end of the universe on an ancient ship, built by the Ancients as a matter of fact, with no idea how they’re going to get back to Earth, let alone survive the trip.

With what I can only call a very slight resemblance to Star Trek: Voyager, SG-U takes the Stargate franchise in a whole new direction. My only complaint is that the first season is a mere 10 episodes, and yet retails for a whopping $80 on Blu-ray, or $60 on DVD.