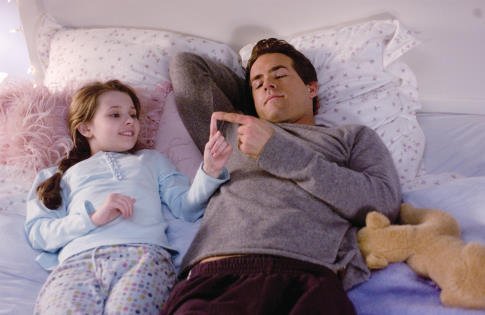 What do zombies, dancers, magical children, a teleporting man, and a romantic comedy all have in common? Absolutely nothing, but all of them make an appearance at the box office this weekend, and at least one of them is a great date movie for your post-Valentine’s Day celebrations.

Definitely, Maybe
There are at least two great reasons to go see this film: Ryan Reynolds and Abigail Breslin. Reynolds, a Canadian actor who has been working his way through Hollywood for a few years now, always brings a unique charm to his roles and young star Breslin is a fresh face on the big screen, but she has already charmed audiences with her role in the indie hit film Little Miss Sunshine.

Beyond the great performers, and the supporting cast that also includes Isla Fisher and Rachel Weisz, there is a clever tale to be told here. Reynolds is Will, a father in the middle of a divorce who finds himself explaining to his daughter how he met and fell in love with his soon-to-be ex-wife, not to mention how he dated two other women. Taking care to cover up his story a little, Will gives his daughter a peek back at his life before marriage.

Most of the popular critics have been praising this sweet and smart romantic comedy that outshines the common genre films, and Mick LaSalle of the San Francisco Chronicle writes that “Definitely, Maybe is hard to outguess. For once in a romantic comedy you won’t be able to tell after 5 minutes who will end up together.”

Diary Of The Dead
Iconic horror director George A. Romero has a street cred with zombie fans that knows no bounds. Considered the grandfather of the modern zombie film scene, he has been dragging his corpsely friends out every few years for bloody romps that consistently draws masses of horror fans.

For his latest film, Romero takes a look back at his roots, using a modern angle to revisit his original Night of the Living Dead. The story follows a group of would-be filmmakers as they start off trying to make a horror film, but end up documenting their struggle to survive the zombie hordes. Shot like a documentary, the film is rife with comments about YouTube and navel-gazing youth, but unfortunately very little real insight to offer.

While some scenes are intense, somewhat gross, and hilarious, overall Diary Of The Dead never delivers the big scares or a very interesting story. A few scenes stand out above others, including the Amish farmer and the way he uses explosives and a scythe to deal with the living dead, but there is very little driving this film, and the ending feels incomplete and obvious.

Jumper
Hayden Christensen may be able to teleport around the world in his latest film, but he’ll always be Mr. Skywalker to me.

In Jumper, Christensen plays David, a young man who discovers that he can transport himself anywhere in the world, and not only is there someone else like him, but there is someone hunting him down.

Director Doug Liman, who previously brought us Mr. & Mrs. Smith and The Bourne Identity, has a knack for making any story dynamic and engaging, but his skills are put to the test with this decidedly dumb story. The reviews aren’t even worth quoting for the film, with the majority of critics calling it a loopy mess.

Reviews are generally quite positive for this youth-oriented film, but parents should expect a less than immersive plot and a rather dark tale on top of it.

Step Up 2: The Streets
Finally, for the dance fanatics, there’s the sequel to the 2006 hit Step Up. In the new film a new “rebellious” street dancer arrives at the Maryland School of the Arts and has to prove herself to the top dancer, Chase. The film features choreography by Jamal Sims, Hi-Hat and Stomp the Yard‘s Dave Scott and critics have definitely not been kind to the film, which is said to be full of clichés. That should not be much of a deterrent for dance-happy film fans looking for a visual treat with a hit soundtrack.