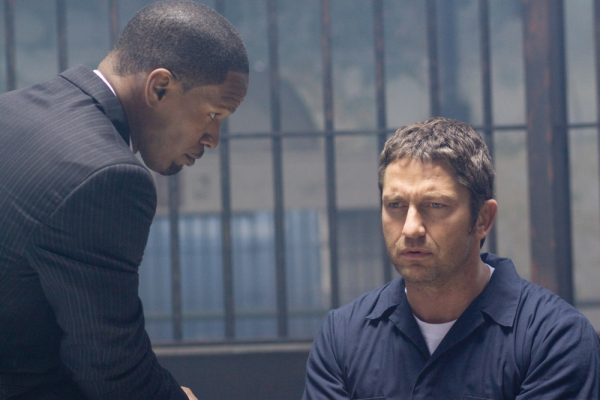 New this week, Gerard Butler and Jamie Foxx star in the action-thriller, Law Abiding Citizen; and in the biopic Coco Avant Chanel, Audrey Tautou portrays one of fashion’s most important women.

What would you do if you lost everyone you cared about? How would you go on after that? And what would you do if one of the people responsible was about to walk away with barely a slap on the wrist because the law simply had no way of prosecuting him?

In director F. Gary Gray’s latest film, Gerard Butler stars as Clyde Shelton, a man subdued during a home invasion and left to watch as both his wife and child were killed before his eyes. A year later, Clyde is once again helpless as the district attorney for his family’s case makes a deal with one of the criminals, letting the thug walk free while his accomplice gets the death penalty.

Taking matters into his own hands, Clyde sabotages the execution, making the criminal’s death as agonizing as possible. He then stages an elaborate operation to hunt down the second thug and torture him to death.

For district attorney Nick Rice, played by Jamie Foxx, it’s obvious who is behind the gruesome deaths, but it’s not until Nick has Clyde behind bars that the attorney begins to understand that Clyde has a bigger plan; Clyde will do whatever it takes to force the legal system to understand the error of its misguided ways.

Law Abiding Citizen is certainly a slick and twisted thriller, and I liked the way it veers wildly away from standard Hollywood territory, but it’s more than a little off-putting.

In a good way, it feels like the offspring of the Bourne series, except that in place of Jason Bourne’s good-hearted intentions we have Clyde’s sadistic approach. Otherwise, the film can be off-putting in some of the more gruesome moments early on, and in the way the script sides whole-heartedly with punishing the legal system for its woes.

Ignoring some of the story’s silly logic — the kind of logic that only seems to work in a Hollywood movie — I was admittedly swept up in the film’s often clever thrills. Despite feeling repulsed by Clyde’s plan, you can’t help but wonder where things are going to turn next, or why.

Foxx and Butler are also obviously good reasons to watch this film. Foxx plays Nick as a hard-edged winner who values his work above nearly all else, although he does love his family dearly. Meanwhile Butler plays Clyde as a maniacally brilliant inventor who has simply been twisted to the point of breaking.

In the hands of the wrong actors, this film could have been ridiculous, especially since Gray is a capable director, but he does not push for much in the way of subtlety.

If you’re of the forgiving sort, I would mildly recommend Law Abiding Citizen, it’s just a hard film to accept. Foxx and Butler are entertaining in these roles, and while I didn’t buy for a minute that Butler was supposed to be the nice and happy father, his twisted side is worth watching.

The DVD package has a couple of worthwhile features, including a commentary track with the film’s producers, a making-of featurette with the director and stars, as well as a look at how the visual effects came together.

Diving into the story of Gabrielle “Coco” Chanel, Coco Avant Chanel (or Coco Before Chanel as it’s known elsewhere) is the tale of one of the most influential people in the fashion world and the loves that helped shape her life.

Looking particularly at her youth, the film was directed by Anne Fontaine, who also directed The Girl From Monaco, and stars Audrey Tautou as Coco.

Writer Christine Estima previously reviewed Coco Avant Chanel for The GATE, and had this to say about the film.

“Those looking for insight into her original inspirations and forays into fashion design will be somewhat disappointed,” Estima wrote, “as this is more about a young girl who rages against everything canonically feminine for her time – corsets, frilly hats, falling in love, posturing, acquiring wealth, and marriage. Chanel, believing that love and marriage are ‘boring,’ engages in an affair with millionaire playboy Etienne Balsan (played by Benoît Poelvoorde), who pays her way in exchange for her charms, but he doesn’t offer her respect or dignity, even hiding her away from his socialite friends out of shame. However, when his colleague Arthur ‘Boy’ Capel (played by American actor Alessandro Nivola), a coal tycoon with secrets of his own, comes into her life, Chanel is exposed to her first pangs of real love, desire, and acceptance. But, as most biopics go, tragedy looms in the near future, and Coco must decide whether to marry and gain the financial stability she longs for, or control her own future and live by her own earnings.”

“Tautou is marvellous in this role, a real departure from the quirky, introspective, jolly characters (Amelie, A Very Long Engagment) she’s played in the past that we’ve come to expect from her. Her portrayal is of honest anger, bitterness, but also ingenuity, and with a real hunger for something that even she has trouble expressing. She can’t decide if she enjoys singing or acting or making hats for Balsan’s famous friends. She doesn’t know fashion stardom is in her future, but she’s striving for greatness nonetheless.”

“Nivola is the scene-stealer of this, however. His depiction of a man earnestly in love and torn between his demons and Chanel is compelling and there’s a fire behind his eyes. It is interesting to note that Nivola learned how to speak French specifically for this role, and his accent, despite subtle flaws, is near-perfect.”

“Even if this wasn’t a biopic, it would still be a ravishing film to behold, with Catherine Leterrier’s exquisite costume design and Alexandre Desplat stirring musical soundtrack. Drawing parallels to the life and novels of Jane Austen, there is no shortage of strong female stories, endeavouring to survive in a man’s world without having to rely on one.”