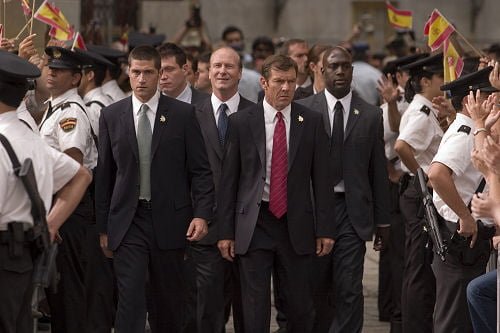 This week at a theatre near you, take a look inside an intricate plot to murder a president as five people try to unravel the truth in Vantage Point. Plus, two guys recreate their pile of lost video tapes at their neighbourhood video store in Be Kind Rewind; a high school student lands in a tough school and uses psychiatry to solve his problems in Charlie Bartlett; and in Caramel a group of women talk about life and love.

Vantage Point
First time feature film director Pete Travis captures an impressive cast for his first big screen effort about an assassination attempt against the President of the United States. William Hurt stars as the President, alongside Dennis Quaid and Matthew Fox as secret agents, plus Forest Whitaker and Sigourney Weaver in a thriller packed with more than a few big action sequences.

With a narrative that cuts between different perspectives of the same event, the characters, and the audience, struggle to find the truth behind the events.

Vantage Point ultimately fails however, despite the cast and interesting filmmaking choices, because the editing becomes both cheesy and annoying. During the screening I heard the audience laugh and complain every time the clock resets, taking you back to 12:00 and a new perspective. The idea is interesting, but over-wrought and the cast is really never used to the best of their abilities.

When we finally get to the end, when all the loose ends are tied up, the action is really incredible, but the main thing I felt was utter relief that I didn’t have to watch that damn clock rewind again.

Be Kind Rewind
Fantastically loopy director Michel Gondry has a knack for brilliant oddities, like Eternal Sunshine of the Spotless Mind, and in his latest film he brings Jack Black and Mos Def together as two friends trying to save their video store after Black’s character mistakenly magnetizes himself. The only bright idea the duo have is to recreate as many famous films as they can think of for their customers, making them into instant neighbourhood stars.

Over the last few years Gondry has had a few big hits, like The Science of Sleep and Dave Chappelle’s Block Party, and all signs point to this being another big hit for the talented director. Critics have found a few faults with the film, with some commenting that the fluffy fare is too ridiculous, but Kirk Honeycutt of the Hollywood Reporter had a positive review, praising Black for his “going-in-five-directions energy.”

Charlie Bartlett
Arriving just in time to cash in, at least according to one critic, where Juno left off, Charlie Bartlett is the 80s-influenced tale of a private-school flunkie who finds a home at a public school that initially hates him. Through schemes that deserve at least a little nod toward Ferris Bueller, Charlie finds a way to make the school love him, thanks to a little dose of psychiatry and prescription drugs. Acting as the school psychiatrist will eventually get him into trouble though, thanks to the girl of Charlie’s dreams, his mother, and the principal.

Starring Robert Downey Jr. as the principal, Anton Yelchin as Charlie, and Hope Davis as his mother Marilyn, the film marks the debut of director and former editor Jon Poll. There are of course comments about the film being just another teen movie, but overall most reviewers have been giving the film positive marks for its inventiveness, cast, and good humour. Edward Douglas of Coming Soon also said in his review that it is “a surprisingly strong addition to the high school comedy genre with more rounded characters and realistic situations than one normally gets.”

Caramel
Last of all this week, writer, director and star Nadine Labaki brings us the tale of a salon in Beirut, where women talk about their lives “between haircuts and sugar waxing with caramel”. The film was at last year’s Toronto International Film Festival and has been well liked among critics. Kenneth Turan of the Los Angeles Times notes that Caramel “is sweet but not saccharine, an intimate film that doesn’t stint on the desperation and anxiety that go along with the search for love.”