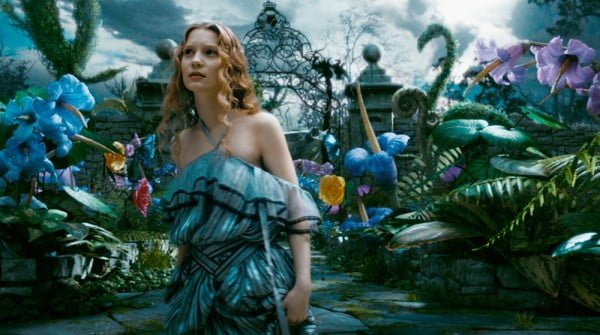 Opening in a theatre near you this weekend, Tim Burton directs the trippy remake of Disney’s Alice In Wonderland; and a look at Antoine Fuqua‘s crime drama, Brooklyn’s Finest.

Even all these years later, Walt Disney’s original 1951 animated classic, Alice In Wonderland, is a hard act to follow. Ask most people about their memory of this well-known story and they tend to think back to what they remember from the film, rather than Lewis Carroll’s novel, Alice’s Adventures in Wonderland. That must have made director Tim Burton’s job just a little bit harder, although if anyone could reinvent Wonderland, there is no question in my mind that Burton is a great choice.

Featuring a cast that could almost not be better suited to the story, the performances are very, very good. Depp once again steals another of Burton’s films as a decidedly Mad but tender-hearted Hatter, Crispin Glover plays the Knave of Hearts, and Stephen Fry voicing the Cheshire Cat.

Not content to merely remake the cartoon or book, the filmmakers and screenwriter Linda Woolverton, who wrote The Lion King, have blended the first book, Alice’s Adventures in Wonderland, with a elements of the second book, Through the Looking-Glass, and What Alice Found There. The concept is sound but the plot makes the film feel like a mishmashed mess of themes ranging from the Lord of the Rings to the Chronicles of Narnia films.

The elements are unmistakable, and it is merely in the way the story has been interpreted that feels like it stomps on the toes of these other films.

Lastly, while I found the story a little weak overall, I was also let down by Disney’s 3D effects. At times the film’s visuals can be impressive, but the quality just does not live up to what we have seen in the reigning champ of 3D, James Cameron’s Avatar, especially in terms of eye-popping 3D effects. The opening scenes in the real world came off looking dark, like something was wrong with the projector, and much of the film is either rendered a little simplisticly, or fuzzily.

Reviews overall have not been kind to the film, or Fuqua’s direction, which many critics have called clichéd.