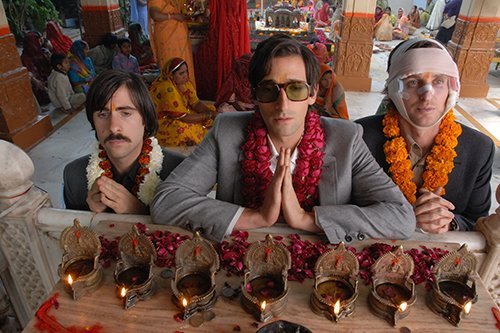 Forget about the vampires rampaging in Alaska, skip the weirdos at the British funeral, and don’t even bother with the period drama about the silkworm smuggler. This week on DVD shelves the only notable releases follow three brothers on an enlightening trip through India, and the epic literary fantasy pitting a great warrior against nearly unbeatable monsters.

The Darjeeling Limited
Wes Anderson has made a career writing, directing and producing compelling and quirky dramatic comedies that have become instant cult classics. Known for his biggest hits, Rushmore and The Royal Tenenbaums, Anderson has carved out a niche telling stories about families with more than a few issues.

The Darjeeling Limited sets three brothers, Francis (Owen Wilson), Jack (Jason Schwartzman) and Peter (Adrien Brody), on a trip across India. The three fell out of sorts with each other when their father died, and now Francis hopes the trip can bring them back together again in this spiritual quest across the country.

Their own personal issues get in the way of the trip though, including troubles with a cheating girlfriend and a pregnant wife back home, even as Francis reveals the real reason for the expedition.

Fan reaction for the film has been very positive, and with these three great actors, plus Anderson’s often brilliant dialogue, The Darjeeling Limited is a great film. Some critics have suggested that the story is barely a step forward from Anderson’s previous works, but Liam Lacey of the Globe and Mail sums up the charm of these films very easily: “Dysfunctional families are as common on screen as off, but director Wes Anderson has a flair for making his clans seem bizarrely unique and yet recognizable too.”

Beowulf
If you dropped the poem Beowulf in front of your average teenager or 20-something, you would have a hard time convincing them why it was one of the greatest epic stories ever penned. Put them in front of director Robert Zemeckis‘ big-budget adaptation though, and I bet the allure becomes a bit more obvious. Sure, the tale has been edited quite a bit for the big screen, but between the monsters, a mighty warrior on a quest for glory, and a digitally-rendered Angela Jolie: this is what adventure stories are all about.

With the voices, and representations of Ray Winstone as Beowulf, Anthony Hopkins as King Hrothgar, plus Crispin Glover voicing Grendel, the film blurs the lines between animation and live action. It was definitely also made for the big screen, so if you have the chance to watch the film on a high definition TV, I would highly recommend getting a Blu-Ray copy of the film.

Silk
This is a sad admission for me, but director FranÃ§ois Gerard‘s Silk is a disaster of a drama. His film The Red Violin is still one of my favorite films, but for all of the magic in that film, none of it is realized in this period epic that should have been a hit.

Michael Pitt is Herve Joncour, a Frenchman living in a town that has seen better days. When silkworm investor Baldabiou (Alfred Molina) asks Herve to embark on a journey to Japan to find fresh silkworms, he does not realize where the trip will lead him, and how far it will take him from his wife Helene (Keira Knightley).

As he travels to and from Japan each time, smuggling out the silkworms, Herve is seduced by a woman who he barely begins to know. The brief moments will however ravage his memories, and stay with him for the rest of his life.

While the film is certainly beautiful, and has a few clever moments, Pitt is a dismal lead who fails to bring any connection to this character. Even though it only clocks in at just under two hours, Silk also feels incredibly long, and does not have nearly enough story for all that time. Much like Pitt’s performance, the film lacks any heartfelt emotion. Something fairly important in a period romance.

Also on DVD this week:

Death at a Funeral is a wannabe “irreverent British comedy” that resorts to cheap gags and at least one disgusting scene for all its laughs. Director Frank Oz, and this impressive cast, can never get past this issue and as a result the film is sometimes funny, but feels all too much like a knock-off of an American teen comedy.

30 Days of Night has all the makings of a spectacular vampire horror film set in the cold of Alaska where night descends for 30 days each year. It looks great, there are a few horrific moments with decent action sequences, but it never aspires to anything greater than a dark action film.