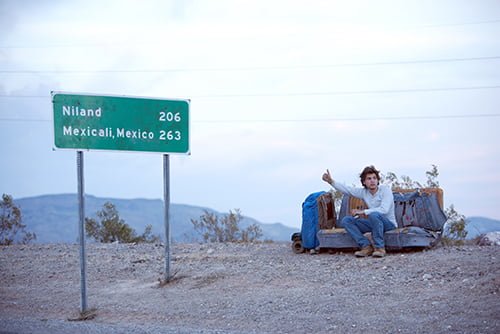 There are too many films where the word “inspired by a true story” seems all too forced, but this week Sean Penn‘s Into the Wild provides an all-too-real glimpse into the short but incredible life of Chris McCandless. For the film I’m Not There, Bob Dylan fans can get an intimate, and strange re-imagining of the singer’s life, through six different actors. Plus, 101 Dalmations arrives out of Disney’s vault, Things We Lost in the Fire explores life after a husband’s death, and a magic toy shop has a mind of its own in Mr. Magorium’s Wonder Emporium.

Into the Wild
The all-too-short life story of Chris McCandless is both tragic, and the stuff of legend. Starring Emile Hirsch as Chris, and directed by Sean Penn, this is a tale that seems perfectly suited to both Hirsch and Penn with their vision of life, the natural world, and how one young man tried to find his place within those realms.

Based on Jon Krakauer‘s book, Into the Wild follows the real-life story of Chris as he graduates from college and gives up his life to hitchhike across America, before finally making his way to Alaska. Leaving his family behind, Chris will utterly turn his back on society on this journey that will also introduce him to many people, before he eventually vanishes into the wilderness of the north.

With a supporting cast that includes Jane Malone, Vince Vaughan, Catherine Keener, Brian Dierker, Marcia Gay Harden and William Hurt, the film is packed with incredible performances. Not the least of which is an engrossing portrayal of McCandless by Hirsch, who swims along the edge of reality in this role.

Into the Wild was one of a handful of critically acclaimed films from 2007, and it is well worth picking up. Bill Goodykoontz of the Arizona Republic explains the film’s draw, saying that “though it’s easy to dismiss McCandless’ hippified musings and near-suicidal choices as the misguided actions of a kid who read Walden a little too closely in college, Penn’s film aims for something more, a deeper telling of a tale of yearning and escape.”

I’m Not There
Earning Cate Blanchett an Oscar nomination, I’m Not There is a dizzying experimental film that places six diverse actors in the role of music icon Bob Dylan. Taking the role of each of six different stages in Dylan’s life, and experiences, the film includes performances of Dylan by Christian Bale, Heath Ledger (in one of his last screen roles), Richard Gere, and the highly praised Blanchett.

The narrative will probably warp your senses, while the film’s unique approach to dialogue may even be a bit hard to digest, but the artistry of the film is wonderfully intense, and I’m Not There is certainly memorable. For many, the experience will be a bit too weird, but there is no question this is a film worth seeing, even if it is so you can say you never want to see it again.

101 Dalmatians
One of Disney’s most beloved animated films finally comes out on DVD this week, and with the wicked Cruella de Vil out to nip herself some Dalmatian puppies for a new coat, this is a film well worth introducing to a whole new generation. It has all the best aspects of the greatest animated films: lots of animals, an overbearing villain, and a sweetly simple plot.

First released in 1961, the film was re-created as a live action film in the 90s, but there is really nothing like the original which has also been cleaned up for this DVD release. Among Disney’s many villains over the years, Cruella de Vil is perhaps one of their all-time most memorable, which makes the film doubly enjoyable.

Things We Lost in the Fire stars Halle Berry, David Duchovny and Benicio del Toro in a tale of a wife who deals with the death of her husband through his troubled best friend. This emotionally charged film puts del Toro to great use in director Susanne Bier‘s first production outside of her native Denmark.

Mr. Magorium’s Wonder Emporium brings a magical store to life as its strange owner (Dustin Hoffman) decides to pass on the business to his assistant, Molly (Natalie Portman). Before that can happen though, Mr. Magorium calls in an accountant (Jason Bateman) to get the paperwork under control, but Molly isn’t sure she can handle this bizarre shop, and wonders if she should sell it.

My Kid Could Paint That is a documentary about child artist Marla Olmstead, a young girl who captured the minds of the art community when her paintings started selling for huge prices. But was Olmstead really responsible for the art, or was it actually the work of her father, the amateur painter? Filmmaker Amir Bar-Lev explores their tale, giving you an intimate look at this strange story, and leaving the answer up to you to figure out.

And finally, classic television arriving on DVD this week includes The Love Boat, volume one of season one, the complete eighth season of Magnum P.I., He-Man and the Masters of the Universe volume one, and a number of classic Doctor Who episodes.