DVD Tuesday: ‘Up In The Air’ and ‘Capitalism: A Love Story’ 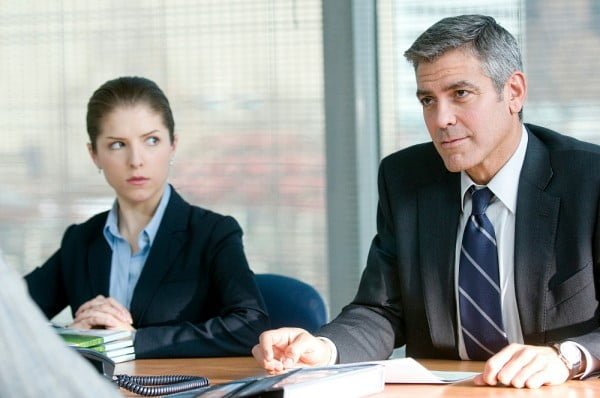 Anna Kendrick and George Clooney in Up In The Air

This week on DVD and Blu-ray I review Jason Reitman‘s Oscar-nominated Up In The Air; Michael Moore‘s quasi-documentary, Capitalism: A Love Story; the animated adventure, Planet 51; plus a look at Oscar-winner, Precious.

As the recent Academy Awards proved, 2009 was a great year at the movies, and among all of the gems that dazzled us one of my favorite films was writer and director Jason Reitman’s Up In The Air.

Out of all the films last year, Up In The Air was one of the very few that immediately seemed like an Oscar contender. Directed by Juno’s Reitman and based on a novel by Walter Kirn, the film is a brilliant drama that has no problem making you laugh, while telling a compelling story rooted in one of the big discussions of the last year: the financial crises.

Compared to Juno or even Thank You For Smoking, Reitman’s touch is still very evident on the story, but it certainly veers in a different direction than his previous work. It’s a funny story, filled with brilliantly written characters, and wonderful asides, but the strength is the incredible drama that lives in Ryan’s sheltered personal life.

Clooney did a marvellous job of investing this character with a sad, lonely depth that is overshadowed only by his cool guy demeanour. That’s the mood that permeates the whole film, from the sterile confines of his tiny apartment, all the way to the airports and hotel rooms.

Screened at the 2009 Toronto International Film Festival, where I was lucky enough to see it, Up In The Air is a brilliant accomplishment for Jason Reitman. Touching, smart, funny and deftly directed, it’s by far one of my favorite films, not only of 2009, but also one of the best in the last few years. It seems unfortunate that the film failed to take the Oscar for Adapated Screenplay, which I think Reitman deserved, but it does not change the fact that this is still a very noteworthy film that is well worth checking out.

One of America’s more controversial directors, the one and only Michael Moore, is back again and this time he’s taking on the volatile topic of the financial crisis that shook the world in 2008.

Known for his slanted documentaries, which are obviously biased to his own point of view over any balanced frame of reference, Capitalism is a critical attack of the U.S. government’s bailout strategy, while also bashing the businesses that ended up consuming American tax payer dollars that ultimately did not end up going to their staff.

At the same time, Moore probes the impact the financial failure has on regular people’s lives across America, delving into their stories and comparing them to both events in America’s past, and even the fall of the Roman empire.

Over the years, I’ve been a fan of Moore’s filmmaking style, including Bowling for Columbine and Fahrenheit 9/11, but I have to admit that Capitalism is not the director’s best work. It is clever and engrossing, with heart and comedy throughout, but it’s also a big, ripe old mess thanks to Moore’s frequent voice-overs and interjections. This is finally the kind of film by Moore that feels angry and intense, but it also is hard to even call a documentary at all.

Capitalism: A Love Story is informative though, and sheds light on details most people may not realize about the financial collapse south of the border. It just needs to be taken for what it is, a capitalist commentary that is as much a product itself as anything Wal-Mart or McDonald’s sells.

Special features include a number of deleted and extended scenes, which are worth a look, and an impressive featurette that looks back at Jimmy Carter’s 1979 speech to Americans about the threat of “self-indulgence and consumption.”

On a distant planet, a city of aliens is about to get a big surprise in the form of a goofy astronaut who has no idea what kind of mess he’s getting himself in to.

Landing his capsule, astronaut Chuck Baker, voiced by Dwayne Johnson, thought he was arriving on a barren planet, but once he stepped out he realized too late that he was not alone. Instead of finding a few rocks, Chuck has stepped into a picturesque 1950s-style world filled with weirdly familiar aliens, who also apparently speak English.

As the military chases Chuck, suspecting that he is actually a vicious monster who can control people’s minds and intends to take over the world, Chuck befriends a group of local teens and tries to find a way off the planet before he’s stranded there for good.

Referencing a number of sci-fi films from the past few decades, Planet 51 is a funny, animated adventure set in a world that is rich and lively. The visuals are a total treat and while the story is fairly simplistic, this is the kind of film that is perfect for a Sunday afternoon with the kids.

Features are pretty standard and focus on the film’s production, a short DVD game, a brief music video, and a look at the film’s stars.

Lastly this week, Precious debuts on DVD just a few days after it walked away with double Oscar gold for its gutsy and heart-rending portrayal of one teenager’s terrible life.

Directed by Lee Daniels and based on the novel Push by novelist Sapphire, the film is set in Harlem in 1987. Following Claireece “Precious’ Jones, played by Gabourey Sidibe, the story reveals this young sixteen-year-old girl’s terrible life taking care of her mother, played by Oscar-winner Mo’Nique, even as she’s pregnant with her father’s child. Seemingly abused at every turn in life, Precious is further challenged at school since she also can’t read or write.

Ann Hornaday of the Washington Post wrote in her review: “[Precious] surely qualifies as the most painful, poetic and improbably beautiful film of the year.”