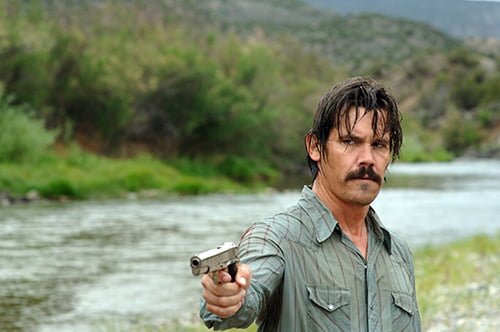 No Country for Old Men

The Coen Brother’s award-winning No Country for Old Men arrives on DVD this week, and while all those awards will certainly draw movie fans in, the best reason to see the film is simply that it is one of the best examples of great moviemaking that I have seen in a long time. Other new arrivals include Sleuth with Jude Law and Michael Caine, the dramedy Dan in Real Life starring Steve Carell, and in that other format, Independence Day arrives on Blu-Ray.

No Country for Old Men
Joel and Ethan Coen‘s magnificent No Country for Old Men may be a multiple-Academy Award winner, but in my mind the greatest praise for the film’s mark on the world is that it is also one of the best films ever made; certainly in the last 20 years. The film characterizes all of the most important film elements, from perfect performances, and spectacular cinematography, to the clever tale that dwells on morality and fate.

In this adaptation of Cormac McCarthy‘s Pulitzer Prize-winning book, Josh Brolin is Llewelyn, a regular guy who stumbles onto what remains of a drug deal gone bad in the heart of Texas. Amid the dead bodies he finds a suitcase filled with money, and with only a brief hesitation, Llewelyn grabs the cash and heads for home. He will have very little time to enjoy it however with the cold-blooded murderer Anton Chigurh, played with astounding skill by Javier Bardem, on his tail, hunting for the cash and leaving a trail of bodies behind him.

The source material is of course, amazing, but the Coen’s manage to bring something very original to the screen. No Country for Old Men is neither an action film, nor a simple drama, but it blends elements of both together with a bit of humour for good measure. They also manage career-topping performances by Brolin, Bardem, and Tommy Lee Jones, who plays an aging sheriff. All three actors have made some incredible films, but in this film they are unforgettable, and Jones has perhaps achieved one of his greatest roles.

Ultimately, every element of the film is perfect, especially the cat-and-mouse plot that flows between some of the most incredible dialogue put to screen. Bardem’s creep-factor is also spellbinding, and enough to make No Country for Old Men an instant classic.

Sleuth
This remake is perhaps the antithesis to everything you will find in No Country for Old Men. Driven by a pathological urge to make everything as pretentious as possible, Sleuth is mesmerizing, but fails in more ways than it can possibly succeed.

Starring Jude Law and Michael Caine, the film is actually a remake which starred Caine in Law’s role back in 1972. For the remake, Caine is Andrew Wyke, a rich and famous author who knows that his wife is cheating on him. In walks Law as Tindle, the hairdresser-actor who is sleeping with Wyke’s wife and has come to convince the writer to divorce her. From that point on, the whole story is a tale of two men trying to best each other at the same game. It has charm in the interplay between these two great characters, but even with some well-wrought drama the story feels completely overblown.

While the film puts the space to good use, there is no missing the feeling that this is a play that has been filmed on an elaborate stage with cameras watching, rather than audience members. Both actors are impressive, and Law has at least one spectacular scene, but the story is just not as clever as the filmmakers want you to believe.

Dan in Real Life
Steve Carell exudes a raw, primal feeling of utter sadness that draws me to his performances, and it always amazes me how he offsets that mood with some of the funniest scenes imaginable. In his latest dramedy, Carell is the advice columnist Dan Burns, a father of three living on their own after his wife died four years ago.

On their annual outing to be with the rest of the extended family at their cottage in Rhode Island, Dan is going through his usual motions when he meets Marie (Juliette Binoche), and instantly hits it off with her. Returning to the family, Dan is overjoyed and tells everyone about this amazing woman he has met, only to find her already there. It turns out that Marie is dating his brother, played by Dane Cook, and Dan can barely contain himself at life’s bitter turn, and the sheer stupidity of the situation.

Comic disaster ensures, but while the film could have easily turned into a third-rate joke, Dan in Real Life manages to outshine its base tendencies thanks to some very good dramatic scenes. The entire cast is excellent, including the girls who play the three daughters, and especially Carell and Binoche. Even Cooke manages a surprisingly endearing performance, driving home the feeling that perhaps Dan shouldn’t be thinking about his brother’s girlfriend. The result is a film that may not surprise you, at least not very much, but it will keep you laughing and squirming in your seat.

Arriving on Blu-Ray, director Roland Emmerich‘s eye-popping, visual extravaganza ID4: Independence Day. Easily one of the best action films ever made, the movie absolutely explodes on this new technology and there is just no comparing the video quality, or the sound. Check it out if you have the chance to see it on a proper 1080p screen, with a full sound system. The commentary with Emmerich and producer Dean Devlin is also well worth a listen with a number of really interesting tidbits about how the film was made.

August Rush stars Keri Russell, Jonathan Rhys Meyers and Freddie Highmore in a tale of a young musician trying to find his parents who gave him up for adoption, and through an odd stroke, don’t even know he is alive. Through his music though, he imagines he can reach out, and begins playing across New York City as he tries to find them.

The hit video game, Hitman, comes to life with Timothy Olyphant as Number 47, an assassin who completed a mission to kill a Russian presidential candidate, but apparently failed. With a prostitute in tow, 47 will have to find out what happened and fix it, or else his life will be forfeit.

Jerry Seinfeld lends his voice to the animated film Bee Movie about an adventurous bee, named Barry, who leaves his hive to discover that humans are stealing honey from their hives. Befriending a florist, voiced by Renee Zellweger, Barry decides he has to do something… so he files a lawsuit.