DVD Tuesday: ‘Blind Side’ and ‘Brothers’ 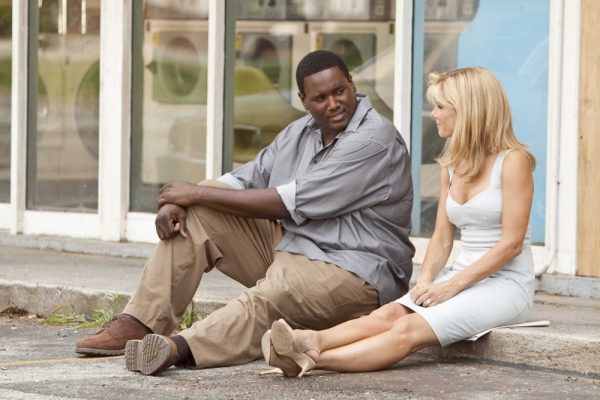 Quinton Aaron and Sandra Bullock in The Blind Side

This week on DVD and Blu-ray: a review of Sandra Bullock‘s Oscar-winning performance in The Blind Side; Tobey Maguire and Jake Gyllenhaal star in the drama, Brothers; George Clooney plays a psychically gifted solider in the offbeat farce, Men Who Stare At Goats; plus a look at the much-praised animated film, Fantastic Mr. Fox.

Perennial sweetheart and leading lady Sandra Bullock has been around Hollywood for a while, but it wasn’t until writer and director John Lee Hancock’s Blind Side came along that anyone ever imagined she would be up for an Oscar.

Bullock is a competent actress, with a resume that most actresses could only dream of, but until this particular film she had rarely been in a film was likely to spoke to the Oscar voters.

The trick, however, is more than just Bullock’s acting. The Blind Side is also exactly the right kind of Oscar fodder to earn respect for the story, while also highlighting Bullock’s direct and heartfelt style.

Quinton Aaron stars in this real-life story as Michael Oher, the soft-spoken young black man who ends up playing football at the local high school and earning himself a place among his new family, and eventually, as a professional football player. Tim McGraw and Sandra Bullock co-star as Michael’s adoptive family, who take him in and try to make him feel at home among all the adversities of high school life.

The film is rife with tender moments and moving asides, and I won’t even try to deny that I was choked up multiple times during the first hour of the film, as the film introduces us to these characters.

Somewhere after that hour though, the film stalls. As Michael is fully integrated with this family, the story becomes predictable, and by the time he is tackling players on the field, The Blind Side has lost every bit of energy it built up in first half.

Aaron reliably plays the part of Michael as you would hope to see him played. He has stereotypical moments, but overall this is a character who comes across as both solid, real, and emotionally withdrawn.

Bullock’s performance is likewise solid and as real as it gets. She fully inhabits this woman’s life, and makes the story all the more moving early on. However, as good as Bullock is in the film, it’s hard to believe that this was the best performance of 2009. She is impressive, to be sure, the film is just not rich enough, and the character not big enough to make me think this was anything other than a great performance. Exceptional is something else altogether.

Maguire and Gyllenhaal play Sam and Tommy, brothers at polar opposite ends of the spectrum. Sam is a marine, married to his high school sweetheart, Grace (Natalie Portman), and living the suburban dream. Tommy on the other hand was just released from prison and has lived his life as a drifter, using his charm to get him through life.

When Sam is shipped off to war though, and his helicopter is shot down, their lives change abruptly. Assumed dead in the crash, his family tries to cope with the loss, which effectively turns Tommy into the family protector, even as a new connection forms between Tommy and Grace.

On the other side of the world, Taliban fighters captured Sam, and he ends up being tortured before he can once again return home to his family. Troubled and utterly changed from his former self, Sam comes back to the States to find everything different, setting off a mental and physical competition between these two very different brothers.

With its strong cast and impressive plot, Brothers is a good drama, but never a great one. The performances are all reliable, the story is often very compelling, but the entire film is flawed because it has nowhere new to go. Brothers treads the ground we’ve seen covered time and again in war films from the last 30 or 40 years, and it gets rather gimmicky by the end.

Not a horrible film, but not one that will leave you feeling satisfied in the end either.

In this political satire, Ewan McGregor plays a journalist looking for answers among a regiment of soldiers stationed during the Iraq War. The question? Why does the U.S. Military think paranormal abilities could help them at war?

Co-starring George Clooney, Jeff Bridges, and Kevin Spacey, the film is filled with jokes about the strange concepts that have floated around the U.S. Military for years, and is actually based on Jon Ronson’s factual book of the same name.

Rambling along with conspiracy theories, strange asides, and a plot that is wonderfully madcap and comic, Men Who Stare At Goats is an oddly comic film. It’s not the traditional kind of thing you expect an actor like Clooney to be involved with either. The film is pretty good though, at least until you get to the end, when common sense is tossed out the window in favour of a completely zany finale.

From director Wes Anderson, who made the quirky hits The Royal Tenenbaums and Rushmore, comes what might be the filmmakers best work to date in the form of Roald Dahl’s classic tale, Fantastic Mr. Fox.

Coming in at 100% among the top critics on Rotten Tomatoes, Fantastic Mr. Fox is easily the best reviewed film of the week, not to mention the month and possibly all of 2009.

As Peter Howell wrote for the Toronto Star, “The result is not only marvellous whimsy, but also something that advances the burgeoning retro-tech movement.”

While Rafer Guzman of Newsday wrote, “With its clever visual jokes and sassy dialogue, Anderson’s first foray into animation doesn’t seem to be made entirely with children in mind. Maybe that’s why it seems so perfect for them.”