Film Friday: ‘Hot Tub Time Machine’ and ‘How to Train Your Dragon’ 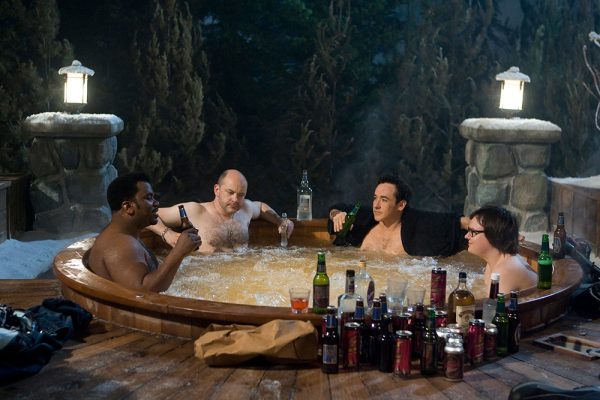 A scene from Hot Tub Time Machine with John Cusack

Hot Tub Time Machine is one of those rare movies that can almost be summed up completely by its title. With tongue-in-cheek appeal, the film is everything you could hope for in a spring release, complete with a fun cast headed by John Cusack, and a plot that has brainless hijinks written all over it.

Cusack is Adam, an average guy on vacation with his best friends, who have all become a little bit bored with their lives. Between their problems, including a controlling wife, the video game junkie who never leaves his basement, and a party animal with no parties to go to, the group of men have seen better days, at least until they discover that there’s a hot tub at the ski resort where they’re vacationing, and it’s actually a time machine.

For this type of comedy, the film is getting above-average reviews, and Roger Ebert of the Chicago Sun-Times was one of many critics who have given the film positive reviews.
As Ebert wrote, “Hot Tub Time Machine, which wants nothing more than to be a screwball farce, succeeds beyond any expectations suggested by the title and extends John Cusack’s remarkable run.”

Or as Michael Phillips of the Chicago Tribune wrote, “A chlorinated, R-rated Back to the Future, Hot Tub Time Machine accomplishes what Snakes on a Plane did not: It offers a merrily idiotic movie to go with its wilfully idiotic title.”

While he was initially trying to prove himself to his father, voiced by Gerard Butler, who also happens to be the chief of the tribe, Hiccup tries to find a way to convince the other Vikings that they can be friends with dragons. A mistake on his part though may lead to even more trouble, and an attack against the dragons’ home.

Featuring the voice work of America Ferrera, Craig Ferguson, Jonah Hill, David Tennant, and Kristen Wiig, How to Train Your Dragon opens in both 3D and regular cinemas this weekend, and it’s looking like the best reviewed film of the month, maybe even of the year so far.

Emanuel Levy of Variety called it, “fun and entertaining family fare in which the humour and action are stronger than the core story and blend of creatures.”

Charged with Egoyan’s trademark sex appeal, Neeson plays the part of the cheating husband who is easily lured into encounters with Chloe the escort, played by Seyfried, while Moore plays the jealous wife who may have started something she can’t stop, even as she enjoys every new emotion the turmoil causes.

Earning just 51% over at Rotten Tomatoes, Chloe is dividing critics who have praised the sexually-charged performances, but are have a hard time with Egoyan’s direction.

“Most of Chloe is plodding and drab,” Owen Gleiberman wrote for Entertainment Weekly. “We’re a step ahead of Egoyan’s tricks, and that’s because we’ve seen them — all of them — before.”