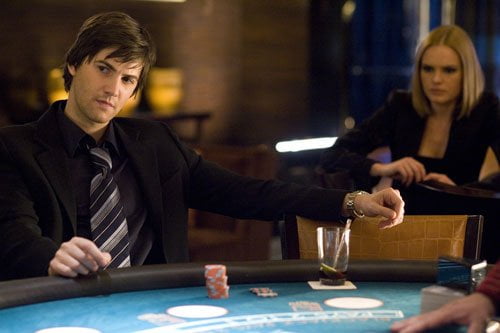 Live vicariously this week with a few films that put you in the shoes of high rollers, marathon runners, soldiers, and mock superheroes. In the clichéd 21, Jim Sturgess plays a geeky student out to make a few hundred thousand bucks in a Las Vegas scheme; Run, Fat Boy, Run has Simon Pegg trying to prove his love by running in a marathon; Stop-Loss is a drama about the plight of soldiers at war; and Superhero Movie spoofs those lovely men and women in tights.

21
Gambling, Las Vegas, and money-making schemes go together like peanut butter and chocolate, at least as far as Hollywood is concerned. The truth may not be quite as glamorous, but in director Robert Luketic‘s 21, the cliché machine is definitely in full swing. The film is highly polished, seemingly loosely based on truth, and about as close to a paint-by-numbers story as I’ve seen in months.

Jim Sturgess, who you might remember from Across The Universe, is Ben Campbell, a slightly geeky student at M.I.T. With just enough back story to convince you Ben is a bit of a loser, we meet professor Micky Rosa (Kevin Spacey), who decides that Ben is such a genius, he is the perfect new spotter to join the secret team of clever students being trained to count cards in Vegas.

For his part, Ben only joins the team because he needs to come up with $300,000 dollars to pay for his tuition. That and he might have a crush on the very cute Jill Taylor, played by Kate Bosworth. Between the huge sums of money the team earns, and the lavish lifestyle, Ben quickly loses focus on what matters in his life though and the morality tale drags you along a slick, but vapid Hollywood adventure.

As with a lot of other “based on a true story” films, 21 seems to relish twisting obviously realistic elements with Hollywood fluff. While I’m all for fun fluff, the problem with 21 is that it seems to want to both be realistic and yet totally wild. It also lacks the intensity that makes these adventures fun in the first place.

Director Luketic, who previously helmed likewise fluffy films Legally Blonde and Monster-in-Law, does bring some fun to 21. The film delights in sometimes silly jokes, and the actors provide very clever delivery of otherwise cheesy lines. But as I left the theatre I realized how much 21 resembles the superior fluffy film, The Girl Next Door. Featuring a better cast, a better script, and a much tighter storyline, The Girl Next Door is the film 21 wishes it could be, but simply is not.

Run, Fat Boy, Run
Shaun of the Dead introduced a lot of people to the hilarious, and totally watchable, Simon Pegg. While Pegg is not what you would necessarily call a gifted actor, he is a natural screen star, especially as far as comedies are concerned. Too bad that in his latest film Pegg is not only underused, but nearly completely wasted with a bland, slapstick script with very few charms.

Pegg plays the out of shape security guard Dennis, an average guy who ran out on his pregnant fiancé Libby (Thandie Newton) five years ago and has started to realize he made a big mistake. The trouble now for Dennis is that a new guy, Whit (Hank Azaria), has entered Libby’s life and easily makes him look like a a slob, and a loser, which he is of course.

When the fit-as-a-fiddle Whit mentions that he is running a marathon, Dennis decides he has to try and one-up the man who is stealing his dream girl and undertakes some serious training, helped along by his landlord Mr. Ghoshdashtidar (the very funny Harish Patel), and his friend Gordon (Dylan Moran).

Run, Fat Boy, Run really wants to be a romantic comedy that appeals to both men and women, but the film feels just about as flabby as Pegg’s character. The film is not very long, and yet it feels like it drags itself over the finish line, with only enough comic effect to keep you chuckling.

While I think the script could have used a lot more work, the main trouble with the film falls squarely on first-time director and Friends alumnus David Schwimmer. The film comes off far too cheesy to be totally funny, and he only marginally gets decent performances out of his otherwise talented cast.

Other new films arriving this week…

Stop-Loss looks like the drama of the week, and concerns the real-life issues facing soldiers in the United States military as they are forced into extended service to serve their country. Starring Ryan Phillippe as Sgt. Brandon King, the film has been getting some good reviews, but some critics have pointed out that it sometimes feels obvious. As Joe Leydon of Variety put it, “A wildly uneven drama, by turns sincere and synthetic.”

Superhero Movie also arrives this week and will surely take a chunk out of the box office. For any of the easily amused out there who enjoyed the Scary Movie films, this is right up your alley with the usual suspects, like Leslie Nielsen, turning up for phoned-in performances. These movies might actually be funny, if they only had decent writers who could string clever sentences together.