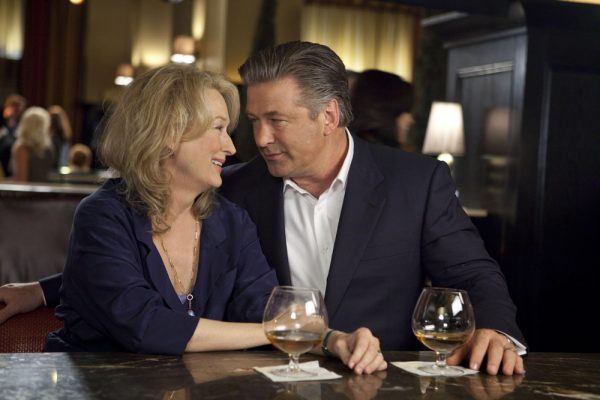 Meryl Streep and Alec Baldwin in It's Complicated

Available this week on DVD and Blu-ray, Meryl Streep, Alec Baldwin and Steve Martin star in the romantic comedy, It’s Complicated; plus a look at four films arriving on Blu-ray for the first time: Out of Africa, Armageddon, Tombstone, and Dune.

Meryl Streep, Alec Baldwin and Steve Martin star in Nancy Meyers’ latest romantic comedy, It’s Complicated, the story of a divorced couple who end up falling into a trying new relationship, despite their history.

On the one side, Jane and Jake, played by Streep and Baldwin, are divorced and yet they are inexplicably drawn back together into a very unexpected affair, despite the fact that Jake has already moved on to a much younger woman, played by Lake Bell, and Jane has something of a relationship started with Adam, played by Martin.

Although their relationships get more complicated with each passing moment, the story is essentially a simple one, about the troubles that come with an aging relationship, and two people who still happen to be quite fond of each other, despite all their differences.

While their roles are not exactly their best, by any means, Streep, Baldwin, and Martin are continually entertaining in this fun little comedy. This is really slumming it for actors like them, but they do their best and make the scenes enjoyable.

The plot is also adult humour that feels just a little bit silly and what I can only call young at heart. That feeling gives the characters and the plot some buoyancy, and it’s probably the best thing the film has going for it, aside from the cast.

Meyers is best known for her more notable comedies Father of the Bride and Something’s Gotta Give, and unfortunately It’s Complicated is not quite the kind of film that’s likely to earn her a heaping of new fans or blowout praise. The film retreads a lot of familiar territory, from her own films and others, and doesn’t really go out of its way to be exceedingly funny or even that unique.

It’s Complicated is worth a watch on DVD though. It’s not a big screen movie, but it is a great little romantic comedy for a Saturday night at home, particularly for anyone over the age of 30 who has been through a relationship or two.

And unless you’ve watched your way through the entire library of romantic comedies, Meyers’ makes everything work throughout It’s Complicated, she just misses what could have been a much, much funnier film.

This week happens to be a big week for some very well-known films, which arrive for the first time on Blu-ray, and for the most part they actually are “must owns” for any film buff like myself.

Out of Africa
Easily the most important film being rereleased this week is the Oscar-winner Out of Africa, starring Robert Redford, and Meryl Streep, and directed by Sydney Pollack. Based on Isak Dinesen’s semi-autobiographical novel of the same name, the story is set in the early 1900s as Karen Blixen, played by Streep, remembers her life in Africa, and the affair she had with a big-game hunter, played by Redford.

Armageddon
Who could forget Michael Bay and Jerry Bruckheimer’s massive action film, Armageddon, all the way back from 1998. Starring Bruce Willis, Ben Affleck, Billy Bob Thornton, Liv Tyler, and Michael Clarke Duncan, to name a few, the film follows a group of drilling experts turned astronauts on a mission to save Earth from a gigantic asteroid. Quite honestly, this is the kind of film that begs to be seen on a big screen, and there’s nothing quite like seeing things explode on Blu-ray.

Tombstone
For the Western fans, Tombstone stars Kurt Russell as the infamous Wyatt Earp, and Val Kilmer stealing the show as the gunslinger Doc Holliday, in the story of what would become known as the Gunfight at the O.K. Corral. The film represents one of the few standout Westerns made in the last 30 years, although it certainly leans a bit on the more Hollywood side of things compared to other classics.

Dune
Lastly, there’s David Lynch’s 1980s sci-fi classic, Dune, starring Kyle MacLachlan, Francesca Annis, and none other than Sting himself. Based on Frank Herbert’s epic novel, the film is set on a distant planet, in the very distant future, where a young prophet tries to lead his people against an empire that is controlling them and their planet. For an example of what happens when sci-fi is done right, and imaginatively, look no further than Lynch’s Dune.