The Dukes of Hazzard film review 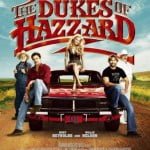 The Dukes of Hazzard

The last few years have brought movie fans a lot of remakes, whether in the form of TV shows brought to the big screen or just plain, old film retreads. Unfortunately, not very many of those remakes have been worth the trip to the theatre, let alone the celluloid they were filmed on.

Because of Hollywood’s track record with these kinds of movies, when I first heard that The Dukes of Hazzard was headed to the big screen I prepared for the worst. I mean, what else could I expect? I watched the original show on TV every week, I was the epitome of a “big fan”, and so far I haven’t exactly been blown away by these kinds of movies.

On top of that, the sheer idea of taking a show from the 70s about a bunch of rednecks, running around the countryside, racing their Charger and shooting fire-tipped arrows at wrongdoers just seemed a tad cheesy for my tastes.

As you might have guessed by my rating though, the surprise is that the film is actually a lot of fun, and it’s got the charm to win over fans and non-fans alike, as long as they’re just looking for an entertaining 106 minutes at the movies. And it works because The Dukes of Hazzard takes all the great things about the TV show and makes them fit into the feature format.

The film takes place in the fictional county of Hazzard in Georgia where brothers Bo (Seann William Scott) and Luke Duke (Johnny Knoxville) live with their Uncle Jesse (Willie Nelson) and cousin Daisy (Jessica Simpson). These aren’t your normal country folks though, unless you believe all the redneck stories you’ve heard all your life. Uncle Jesse is the whimsical old guy who cracks wise and makes moonshine, Daisy is the hot waitress that works in the local bar, and Bo and Luke are the adventure-hungry goofs. All is not perfect in Hazzard for the Duke clan though as they try to protect themselves from the wiles of Boss Hog (Burt Reynolds), the crooked head of the county police who’ll do anything to get rid of the Dukes and make some money at the same time.

For the first few minutes of the film I have to admit that I just couldn’t accept Scott and Knoxville as Bo and Luke. I’ve only been marginally impressed with them in the past and this just seemed like an odd stretch. But at about the 10-minute mark I realized that I actually had accepted them – they just were a new take on the originals. Maybe a little more crass and silly, but still the Bo and Luke I knew as a kid.

Both Nelson and Reynolds, along with Jessica Simpson, were cool choices for the cast, but I’m not sure any of the three really got the screen time or the script their characters deserved, although they still fit in quite well. The only actors/characters that really seemed to get ignored in the film were M.C. Gainey as Rosco P. Coltrane and Jack Polick as Deputy Cletus – two of my favorite characters from the original show who seemed to be in the background more often than not.

While the plot and brief character issues leaves a little something to be desired at times, the film takes all the charm of the original series, including the goofy plots, freeze-frame storytelling and Southern antics, and runs with it. The script even delivers more than I expected every now and then, especially when the 70s-esque plot runs smack into the modern-day world. The best of these moments being when the Duke boys head off to Atlanta and discover that their car, the General Lee, is less than well-received.

As far as the film’s mood goes, I don’t think I’ve seen many movies this year as consistent as The Dukes of Hazzard. There’s no denying that the film is simple-minded, but that doesn’t make it any less enjoyable. In all honesty I’d rather see The Dukes of Hazzard, with it’s simple goofiness than any other more “respectable” film that comes off feeling incomplete or even perhaps boring (Broken Flowers, I’m looking at you here).

Some critics have already railed on this film because of certain flaws they’ve seen in the story. While I think they’re being a tad hard on the film, I do agree, the movie did come up a notch short, even if it did exceed most of my expectations. The aforementioned missed opportunities with the characters and plot being the main problems. At times the film also stalls when the Dukes are getting from one point in the story to another, but that said, when the movie revs up you can’t help but just sit back and enjoy it. (If you’re not laughing at the jokes or taking in the brilliant, over the top chase scenes, then some of the audience will likely be enjoying Jessica Simpson’s more revealing moments.)

All said and done, this was easily the most fun I’ve had at the movies all year. Hopefully the film will do well enough to warrant a sequel – if nothing else it would be a great opportunity for screenwriter John O’Brien and director Jay Chandrasekhar to work together again. Chandrasekhar even seems to have finally come of age on this project with a much more focused vision than I’ve seen in the past with his Broken Lizard palls.

Simply put, if you want to see a fun movie this month with a lot of action, stunts and jokes, this is the movie for you.