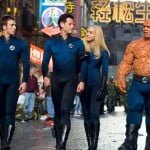 Everybody loves a good hero. They’re daring people with amazing abilities who want to make the world better. So it was natural that when computer animation finally became realistic enough to make anything look real, we reached back into the comic books and decided to make movies about the kinds of heroes we’ve always wanted to see on the silver screen… superheroes.

The problem of course is that after a number of comic book adaptations things are starting to look just a little bit the same, and no film personifies that more than the dreadful, downright boring, Fantastic Four.

You can’t blame anyone for the title though, in comic-book form these superheroes were Fantastic. Stan Lee (who once again makes a cameo) and Jack Kirby’s Fantastic Four were vibrant and exciting on the page, and the art brought out something really exciting about the Human Torch’s blistering flames, The Thing’s earth-shattering power, or even Reed Richard’s elastic-reach.

With this film you get something else though – a kind of literal translation of the material that turns it into mere comic-folly before and after huge action sequences. Unlike the recent great comic book adaptations, like Bryan Singer’s character-driven X-Men films, or Sam Raimi’s picture-perfect Spider-Man franchise, Fantastic Four just kind of coasts on the concept of the film. We peek inside the minds of the characters, but when it comes to story, there is none. The plot of the film seems written half-heartedly, as if they realized the characters had to do something to get from point A to point B, but they didn’t really come up with an exciting way of doing it.

The film starts with long-time friends/co-workers Reed Richards (Ioan Gruffudd) and Ben Grimm (Michael Chiklis) trying to pitch their scientific research plan to their old acquaintance, the mega-rich Victor Von Doom (Julian McMahon). After grovelling for his Victor’s amusement they end up with an agreement, which is when they also happen to meet Reed’s old girlfriend, Sue Storm (Jessica Alba) – Victor’s main squeeze.

Eventually, along with Sue’s daredevil brother Johnny (Chris Evans), all five of them shoot off into space where they get radiated with some crazy space energy that gives them each unique super powers. Reed becomes Mr. Fantastic, a guy who can basically stretch like rubber; Ben turns into a big lump of rock they call The Thing; Sue turns into the Invisible Girl; and Johnny can light his whole body on fire, so he’s called The Human Torch. As well, Victor gut’s some power of his own, but we’ll get to that later.

The “story”, if you can call it that, draws Johnny, Ben, Sue and Reed together from there for one event that puts them in the public eye as the new heroes of the day, despite the fact that they actually helped cause the whole disaster. This leads to a face off with their former friend Victor, in his new guise as the obviously disturbed Dr. Doom.

What is really unfortunate is that the film looks pretty good, the effects are mostly compelling (aside from Johnny when he’s alight, since he looks almost entirely like a rubber, computer-generated doll), but none of the story really draws you in. It’s flat and dead, and only a few character moments really reach out and grab you, but those are all too brief to appreciate.

My other big complaint is that the film feels entirely too ridiculous. The dialogue is one thing, it actually makes Star Wars: Episode III look well-scripted, but the actual character’s powers come off sub-standard. In comic book form Mr. Fantastic was actually kind of cool, but in the wake of Pixar’s amazing Incredibles, he just doesn’t seem as cool on the big screen – in fact, he looks downright stupid. All of the superheroes come off feeling inadequate, especially after all the comic book adaptations we’ve seen in the last few years.

In particular though, Victor isn’t much of a villain at all. He seems callous, bad-tempered and maybe even bad, but I’m not sure he’s really Evil, with a capital E. He also looks about as threatening as someone who just stepped into a pile of crap on his way to work.

Basically, what I’m saying is that if you were hoping for a Fantastic film, you can forget about it. Kids might enjoy it, but otherwise I’d call them the “Mediocre Four”, or maybe the “Insipid Four”. The word humdrum also comes to mind. And I blame this on director Tim Story, producer Chris Columbus (who has a knack for stupid films) as well as the team of writers (which included Michael France). If the film had actually had some style, felt a bit bigger, had more interesting set designs, and looked just a little more retro, it might have worked a notch better.

Mind you, I’m not wild about the casting either. Both Alba and Evans are decent in their roles, although I wouldn’t believe for a second that they’re brother and sister, and I really liked Chiklis as the troubled soul who got stuck inside the body of a rock giant.

Gruffudd and McMahon on the other hand, basically the two main leads, just didn’t seem to have the direction they needed to pull off their roles. On top of that their roles aren’t engaging and Gruffudd actually annoyed me with his blandness. McMahon’s menace-less attitude though is the deal-breaker – he ruins the story the most by just not being a convincing villain that anyone should be afraid of, especially not our “heroes”.

Regardless of who you blame, and there are lots of people to blame for the film’s lacklustre results, the point is that we can only hope the already planned sequel gets dashed against the rocks, or gets a new team behind it. There have been worse films, especially comic book adaptations, but the source material should have guaranteed a good film. As heroes go though, I’d rather take my chances with Howard The Duck.