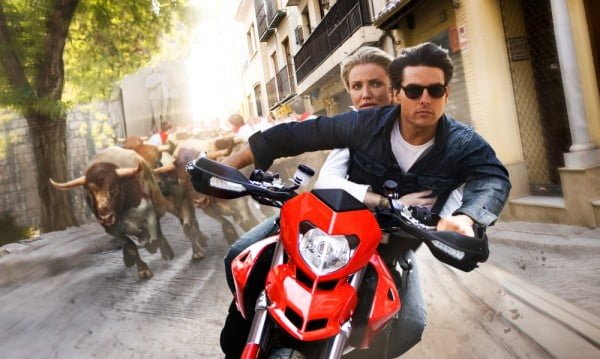 Cameron Diaz and Tom Cruise in Knight and Day

Knight and Day is a make or break movie for Tom Cruise. After years of ridicule, and less than spectacular results at the box office, the industry is quietly watching to see what happens when the former A-lister’s latest film opens in theatres.

Leading up to the film’s release though, Knight And Day looked like an uncommonly smart move for Cruise. The role seems to poke a lot of fun at his previous films, like the Mission: Impossible franchise, and yet it still looks like a fun action film that could make Cruise a big star once again.

Cruise plays Roy, a secret agent on the run from the government and trying to evade another agent, played by Peter Sarsgaard. The operation to bring Roy in gets complicated however after Roy meets June, played by Cameron Diaz, and drags her into his world of explosions, violence, and non-stop action while the government hunts for the duo around the globe.

Based on the critical response, the problem is that Knight and Day just does not live up to the hype, or provide enough of a solid stage for the actors.

Overall, the film has earned just 51% fresh at RottenTomatoes.com, which does not bode well for Cruise’s career. That may not matter if the fans speak with enough box office cash, but right now Cruise’s big comeback is on shaky ground.

The writing and directing duo of Jay and Mark Duplass had a great year back in 2008 with their indie hit, Badhead, a film that earned them not only a lot of respect, but the kind of filmmaking fame that meant they could move on to bigger projects. Expectations were therefore fairly high for their follow-up project, but based on the reviews, Cyrus is the best film opening in theatres this weekend.

Jonah Hill stars as Cyrus, a young new-age musician who is very close to his mother, Molly, and also happens to be very protective of her around potential new boyfriends. So when John, played by John C. Reilly, starts falling in love with Molly, played by Marisa Tomei, it turns into a contest to see who will be left standing next to their special lady in the end.

Filmed using an improvisational style that the Duplass brothers have become famous for, Cryus looks like your best bet this weekend if you’re looking for a good laugh with a great cast.

Joe Neumaier of the New York Daily News wrote in his review, “We all have routines, but the characters in Cyrus have complicated systems for dealing with things, and watching them smash into each other is endearing and often hilarious.”

Not all the reviews are completely glowing though, and Jen Yamato of Movies.com had a bit to say about the film’s flaws. “Cyrus begins to feel exactly like all those indie movies we desperately hoped it wouldn’t turn out to be like — quirky, talky, and yawn-inducingly familiar.”

Lastly, the disaster of the week, maybe even of the entire year, is director Dennis Dugan’s Grown Ups, starring Adam Sandler, Kevin James, Chris Rock, Rob Schneider, and David Spade as a group of friends who reunite as adults when their childhood basketball coach passes away.

Reviews for the film have been universally negative, and mostly suggest that Grown Ups is simply not very funny, or entertaining. As Edward Douglas of ComingSoon.net wrote, “Not the worst movie any of the cast have done but far from their best work… the sum of the parts rarely achieves anything as funny as Sandler might have done on his own.”