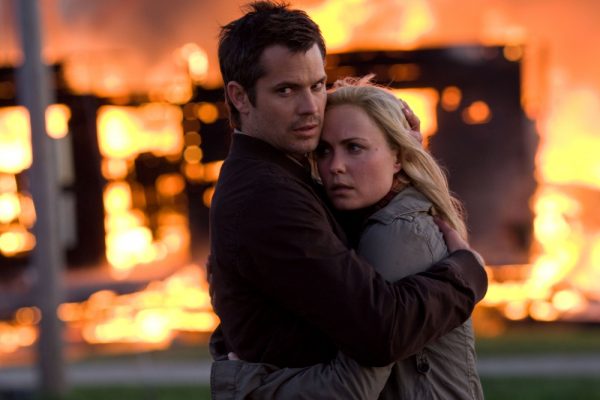 Timothy Olyphant and Radha Mitchell in The Crazies

Zombies are scary, but there is something even more horrifying about regular people infected with a disease that turns them into monsters capable of inhumane, brutal acts of murder.

Based somewhat loosely on George A. Romero’s classic 1973 horror thriller, Breck Eisner’s The Crazies is the story of a tiny town in Iowa that finds itself overrun with plague victims who turn insane and start killing everyone in sight.

With the military called in to shoot survivors, whether they’re infected or not, as a means to keep the contamination from spreading, a small group of uninfected people try to find a way to survive as the population increasingly turns ultra-violent.

Timothy Olyphant leads the cast as Sheriff David Dutton, a stead-fast do-gooder who quickly uncovers the strange clues that suggest the government is behind the terrible events in his small town. Rounded up by the military, David is separated from his wife, played by Radha Mitchell, who is singled out as one of the infected. Although David could easily just walk away form the town, when the opportunity presents itself he sneaks back to rescue his wife and another way to escape the doomed town.

Co-starring Joe Anderson as Deputy Russell, The Crazies is a solid action-horror film that puts great use to Romero’s original story, while somewhat reinventing it for this era. Much of the original theme though, including the fear of disease, and the inhumane acts of a terrible government, needed little updating. After all the real-life viral outbreaks around the world, and the modern image of the U.S. government, The Crazies is just as relevant today as it was in 1973, and once again shows the genius of Romero’s stories.

From the opening strains of Johnny Cash singing “We’ll Meet Again,” to Olyphant’s grim portrayal of a nearly shattered hero, The Crazies is a chilling horror film that is incredibly entertaining, and even a little thought-provoking. The DVD package also comes with a number of above-average making-of featurettes, including a detailed look at the story, the makeup, plus an awesome tribute to Romero’s films over the years.

Hot Tub Time Machine is one of those rare movies that can almost be summed up completely by its title. With tongue-in-cheek appeal, the film is everything you could hope for in a far out comedy, complete with a fun cast headed by John Cusack, and a plot that has brainless hijinks written all over it.

Cusack is Adam, an average guy on vacation with his best friends, who have all become a little bit bored with their lives. Between their problems, including a controlling wife, the video game junkie who never leaves his basement, and a party animal with no parties to go to, the group of men have seen better days, at least until they discover that there’s a hot tub at the dilapidated ski resort where they’re vacationing.

Little do they realize until the next day though that the hot tub was actually a time machine.

It’s the best of all things screwball and actually plays out like some of the funnier comedies from the eighties.

Hot Tub Time Machine is a lot of fun, and while it’s not for everyone, the DVD is worth renting at the very least.

Creation fumbles around at times, and misses big opportunities, but it’s not a terrible film, it just far from what I would call a potent drama.