DVD Tuesday: ‘Girl with the Dragon Tattoo’ and ‘Brooklyn’s Finest’ 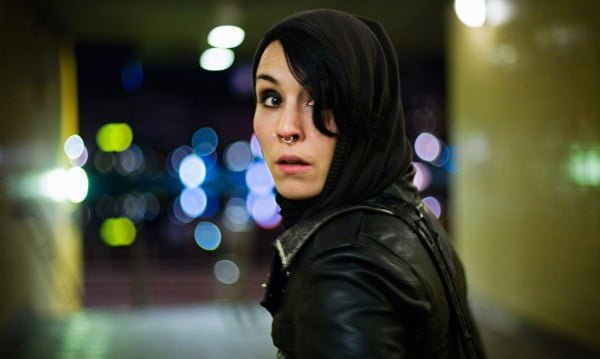 Noomi Rapace in The Girl with the Dragon Tattoo

The Girl with the Dragon Tattoo is an engrossing indie thriller that can probably be best summed up with author Stieg Larsson’s original Swedish title: Men Who Hate Women.

Dark as the title suggests, it’s a flat-out description of the core of this film, and yet there is so much more going on in director Niels Arden Oplev’s film adaptation.

The Scandinavian noir hit stars Noomi Rapace as the titular Lisbeth, a 24-year-old hacker who works as a sort of digital private investigator, charged with getting as much information as possible about troubled journalist Mikael Blomkvist, played by Michael Nyqvist.

Mikael has had his name dragged through the mud after a massive libel case involving a major company, but his real story begins when a wealthy businessman calls him in to investigate the 40-year-old case of his dearly-loved missing niece.

While Mikael works on the case, digging for clues about the girl’s disappearance, Lisbeth is quietly watching his work through his computer, and begins to put pieces of the puzzle together herself.

Uncovering murders, family conspiracy, and trying to keep from getting killed during his investigation, Mikael eventually ends up working with Lisbeth, and from there the story only gets darker.

Revisiting crimes of yesterday, and a few modern ones as well, The Girl with the Dragon Tattoo is a moving thriller that is as dark as it is compelling. Through a number of horrifying scenes, the film moves deftly and deliberately through a complex tale that gets more intense as each layer is peeled back.

Although the film is somewhat long at just over two-and-a-half hours, this is one of the most fulfilling noir thrillers I’ve seen in ages.

The film does have its clichéd, melodramatic moments, but I give huge credit to Nikolaj Arcel and Rasmus Heisterberg for adapting Stieg Larsson’s novel; not to mention cinematographers Jens Fischer and Eric Kress, who give the film a style that leaps off the screen, and editor Anne Østerud for the film’s well-paced sequences.

Nyqvist is also a praise-worthy lead, carrying the vast amount of the story, but it’s Rapace that makes the film soar. Like my praise for the film itself, Rapace’s Lisbeth is one of the most memorable characters of the last year; a strong, moody, and moving figure of battered but resolute womanhood.

All told, that makes this recommendation pretty simple: Ignore the fact that this is a subtitled, foreign film; The Girl with the Dragon Tattoo is a must-see film for anyone who craves a great whodunit thriller.

Reviews overall were not kind to the film, or Fuqua’s direction, which many critics have called clichéd.

First-time director Tom Ford’s highly touted A Single Man, which is based on Christopher Isherwood’s novel of the same name, also debuts on home video this week. Set in 60’s-era Los Angeles, the story weaves around the Cuban missile crisis as a British college professor, played by Colin Firth, tries to sort out his life after his partner passes away.

Dealing with romance and love cut all too short, A Single Man is a highly regarded indie drama that earned Firth numerous award nominations during the awards season earlier this year.