Film Friday: ‘Predators’ and ‘Despicable Me’ 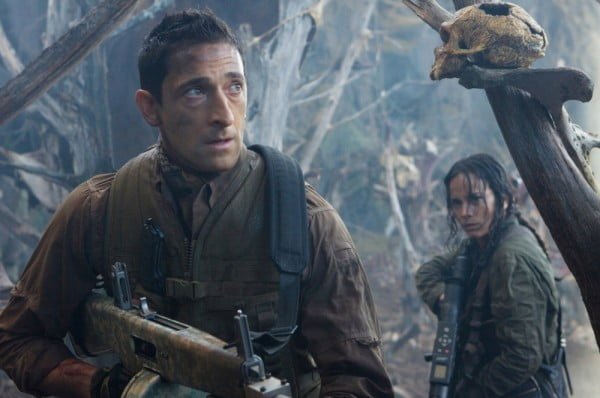 Opening this weekend in theatres, Adrien Brody gets his first big action role in the franchise sequel, Predators; and Steve Carell voices an evil villain who plans to steal the moon in Despicable Me.

In director Nimród Antal’s Predators, a group of very different fighters and killers find themselves together in a dense jungle, and none of them know how they got there. Each of them was dropped in by parachute, and only woke up as they fell through the atmosphere, and now they’re trying to understand who brought them together, and why.

Brody turns out to be a solid lead in this action film, and while he’s no Arnold Schwarzenegger, he is believable in the role of a fighter who has very little humanity left. The rest of the cast also provide acceptable fodder for the Predators, although I’m starting to wonder if Topher Grace can play anything else beside this one movie role.

Compared to all of the previous sequels, which sucked a lot of the thrills out of the Predator as an unstoppable foe, Antal builds at least a quiet level of anticipation and unsettled fear. The story takes its time getting to the action, and even then, the battles between the humans and the Predators comes in jolts, but it’s an entertaining trip for the most part.

Predators is still just a bland photocopy of the original film though, and even a very entertaining appearance by Laurence Fishburne as a deranged survivor is little more than a break from the film’s turgid pace and rote actions. The story follows all the points we expect from this kind of action-horror film, and does nothing to give us something new from the Predator as a villain.

After four sequels there is still something brilliant lurking inside of the Predator franchise, and Antal has done the best job of capturing that essence in years, but it’s still just a glimmer in Preadtors. Since he ends the film with a clear path to another sequel though, we can only hope he brings a little suspense and ingenuity back to the franchise with yet another sequel for this beleaguered franchise.

Also opening this weekend, the animated Despicable Me, which appears in 3-D, is sure to be a big force at the box office and stars Steve Carell as the voice of Gru, a terrible villain who plans on stealing the moon.

Hidden away in his lair, which is beneath a house on the edge of suburbia, Gru has minions, vehicles, and weapons, and his big heist might even be a success if he hadn’t met three orphans who think he might make the perfect father.

Gru will try to carry out his plan, if he can just get past his most challenging new obstacles: Margo, Edith and Agnes.

Despicable Me is getting very solid reviews from most of the major critics, who are praising directors Pierre Coffin and Chris Renaud for their solid, summer fare. While it’s obviously no Pixar movie, it is solid entertainment for families this weekend.

As Roger Ebert wrote for the Chicago Sun-Times, “The film is funny, energetic, teeth-gnashingly venomous and animated with an eye to exploiting the 3-D process with such sure-fire techniques as a visit to an amusement park.”

While Robert Wilonsky of the Village Voice wrote, “The result is pleasant and diverting, if ultimately forgettable, and it’s one of the rare instances in the recent history of 3-D’s resurrection as The Savior of Cinema in which the technology doesn’t dim the screen or distract the focus.”