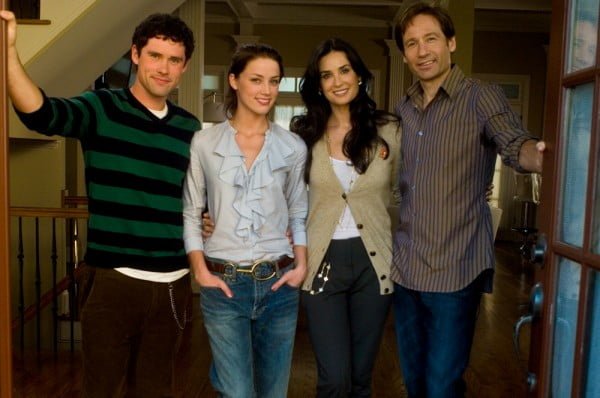 The cast of The Joneses

We head to the suburbs this week for a look at three new arrivals on DVD and Blu-ray, including: David Duchovny and Demi Moore play the perfect fake couple in the dramedy The Joneses; Tina Fey and Steve Carell end up with big thrills as they try to enjoy their Date Night; and a look at the short-lived 80s TV series, Max Headroom.

Everybody loves shopping. Even as the economy struggles people want to be able to buy new things, and marketers are constantly trying to find new ways of making you want the products their clients are peddling.

In director Derrick Borte’s satirical dramedy, The Joneses, we get a glimpse at what might happen if companies took one step forward into the moral grey area of bringing marketing covertly to the masses.

David Duchovny and Demi Moore star as Steve and Kate Jones, the seemingly perfect couple who move into an upscale suburb with their two equally perfect kids, played by Amber Heard and Ben Hollingsworth.

As the couple settle in to their new home, which is packed with all the latest and greatest gadgets and goodies, they quickly make a lot of friends, who just as quickly want to own all of the things the Joneses own.

Steve has a new car, so the neighbour wants the same car.

Kate shows off the latest designer workout clothes, so all the women on the block want the same flashy new clothes.

Even their kids are enticing their new “friends” to go out and buy the latest cosmetics and gaming gear.

What nobody realizes is that the Joneses aren’t such a perfect family. They’re not even a family. The four of them are employees for the company LifeImage which has them acting like a family to sell the latest and greatest products to influential people who help make brands popular.

For most of the Joneses, the job is easy, and fun, but Steve has a hard time getting his sales up, and if he doesn’t start performing, he might be out on the street.

Meanwhile, Steve also has a big crush on his “wife” Kate, their daughter is getting into trouble with an older man, and their son just doesn’t seem comfortable in his role.

The Joneses works as a light satire, and the concept is ingenious to say the least, but the story never really finds a groove. Early on The Joneses is kind of fun, snappy, and seems ready for laughs more than anything else, but by the second half of the film there’s an awkwardly melodramatic message boiling to the surface, and it just ends up blowing up in our faces in a sticky, silly mess.

On the bright side, the cast certainly sells the story, and the chemistry between Duchovny and Moore is quite good. Heard and Hollingsworth are also very convincincing as the conflicted high school students. However, the film feels like it skips over numerous opportunities to be edgy and funny. As it is, The Joneses points out flaws in our little consumerist culture, and makes fun of the way marketing works, but it never really makes you laugh or think too much about it all.

The Joneses is still a good film, well above the average dramedy, and it’s certainly interesting in almost every way. For a film with such a great premise though, it’s disappointing that there wasn’t just a bit more to digest, and the film also clearly deserved a better ending, rather than the contrived ending that seemed like it was generated by a marketing committee.

The DVD package comes with a few features, but nothing very exciting. You can watch Steve Jones’ full-length LifeImage interview, an alternate scene with Mick in bed with Steve, and a look at Steve’s life after the film.

Couples need more excuses to watch movies, and Night at the Museum director Shawn Levy has about as good of an excuse as you could hope for with his new film, Date Night.

Arriving at one of the hottest new restaurants in the city, the couple doesn’t have a reservation, but on another whim Phil decides to take someone else’s reservation rather than taking his wife somewhere else.

The first time this happens, when the two cops drag Phil and Claire outside the restaurant, it’s far too jarring. One minute the couple are making jokes and the next they’re almost begging for their lives. Levy clearly wanted the moment to matter, and it does sink in, but it ruins the mood of the comedy in a way that doesn’t work for the audience, who have to switch gears to follow the wayward mood.

Most of all, Date Night makes for a great night in for couples. The humour revolves around the things that most couples face over the years they’re together, and it’s all in a format that is very casual and appealing. Carell and Fey’s off-the-cuff humour, since many of the scenes had improvised lines, works very well and both of them represent the funny every-man and woman who we all identify with.

Date Night is frequently not as funny as it thinks it ought to be, but it’s still funny all the same.

There are a few worthy extras on the DVD. There’s Best of Directing 301, where Levy walks you through an evening of filming; Alt City, a collection of alternate takes from the film; an average 6-minute gag reel; and lastly, Levy’s Directing Off Camera, where he shows us how he inspired some of the film’s more lively scenes.

Finally, I had to mention the arrival of the 80s cult classic Max headroom on DVD, which arrives this week thanks to the fine folks at Shout! Factory.

The “Complete Series” includes all 14 episodes, plus an entire disc of extras, and while it was cetainly a short-lived series, it was definitely a lot of fun. Check it out, especially if you were a fan back in the day.