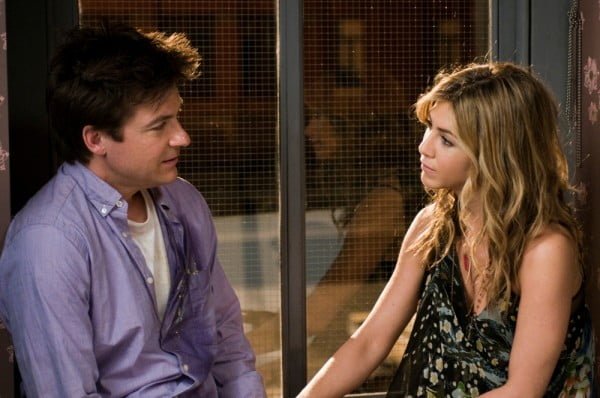 Jason Bateman and Jennifer Aniston in The Switch

Opening this weekend in theatres: Jennifer Aniston and Jason Bateman star in the romantic comedy, The Switch; a swarm of hungry prehistoric critters dominate the horror-comedy, Piranha 3D; Omid Djalili plays a Muslim man who discovers he might actually be Jewish in The Infidel; plus a look at the children’s comedy, Nanny McPhee Returns.

Best friends may not fall in love all that often in the real world, but it’s something that happens a lot in the movies.

In The Switch those friends are Wally and Kassie, played by Jason Bateman and Jennifer Aniston. Kassie is a 40-year-old with no husband and nothing on the horizon, so she comes up with the big idea of having a baby on her own with the help of some donated sperm from a young, handsome man. Things get a little weird though when Wally gets drunk at her apartment during a big party, and ends up switching the sperm sample with his own. Too bad he was too drunk to remember it the next day though.

Jump ahead seven years and Kassie has just moved back to the city and is reconnecting with Wally when he finally remembers what he did all those years ago, and now he’s face-to-face with Kassie’s son, who looks and acts a lot like him.

Roger Moore of the Orlando Sentinel called The Switch, “The best Jennifer Aniston movie in ages,” but based on the sheer number of reviews, the film is mediocre at best. RottenTomatoes.com rates the film at just 49% fresh, but as Moore goes on to say in his review, the film is also “a star vehicle for Jason Bateman. And Aniston’s work opposite the screen’s premiere mild-mannered funnyman shows her at her most engaged and pitch perfect.”

What happens when a swarm of the most deadly creatures in history belly up to a vacation hot-spot for young, sexy, Americans? Well, you get one of the more off-beat 3D movies to debut this year, and it’s packed with cameos by some very funny co-stars.

Piranha 3D is set in Lake Victoria, where Spring Breakers come every year to get their freak on. This year is a little different though as an underwater earthquake unleashes prehistoric piranha that are about to eat anything in sight, including most of those young, sexy Spring Breakers.

The reviews for the film have been sparse, as it seems the film wasn’t screened for press in Canada, but there are a number of positive reviews from American and British press.

As Nigel Floyd wrote for Time Out, “[Director Alexandre] Aja serves up the tongue-in-cheek thrills, CGI-enhanced gore and gratuitous nudity with such unabashed relish that this may prove to be the summer’s break-out horror hit.”

In the offbeat, funny and irreverent comedy The Infidel, Omid Djalili stars as Mahmud Nasir, the owner of a cab company who may not be the most devout Muslim, but he takes pride in his religion and family. That is, until he discovers that he’s adopted and is actually Jewish.

On top of that, Mahmud is trying to impress his son, who is about to get married to the daughter of one of the most well-known Muslim clerics in the world, particularly because the cleric has outraged people of all faiths with his biased opinions.

Mahmud has to decide how much he wants to know about his heritage so he can meet the man he believes is his birth father, and that leads to exploring all those well-known stereotypes about Jewish men, and Muslim men, all while Mahmud’s wife wonders if her husband is actually coming out of the closet.

The Infidel is a hilarious, often off-the-wall comedy, and it explores all the usual stereotypes with glee, and a lot of charm. Dja is the perfect actor for this role, and plays the part of the confused Mahmud with wit and chutzpa. He carries the film admirably, but the entire cast is noteworthy, including co-star Richard Schiff who plays Mahmud’s Jewish teacher, Lenny.

Lastly this week, Emma Thompson returns to the role of the wondrous and bewitching Nanny McPhee, who has to take charge of a group of kids who are sent to a farm during wartime.

The kids have driven their family almost crazy as their mother deals with the chaos of trying to keep their farm running. That’s where Nanny McPhee enters to save the day and teach the kids some lessons while showing them just a little bit of magic.

The film has received great reviews from critics, with Keith Uhlich of Time Out New York writing, “This is children’s entertainment on the structural level of Roald Dahl and George Miller’s great Babe: Pig in the City, even if the visuals rarely rise above polished and proficient.”