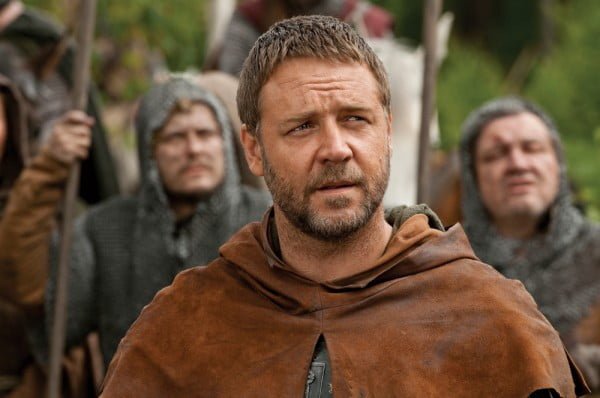 New this week on Blu-ray and DVD: Russell Crowe stars in Ridley Scott’s action-adventure, Robin Hood; Kevin Spacey stars in the 1990s satirical drama, American Beauty; plus a look at a number of new television seasons coming out on store shelves.

Since 1908, Robin Hood has been remade for film and television dozens of times, and the character has been played by the likes of Errol Flynn, Kevin Costner, Sean Connery, and Carey Elwes, to name just a few. Aside from a number of television productions though, it’s been 17 years since the legendary character has walked around Nottingham, and that was Mel Brooks’ comedy, Robin Hood: Men in Tights.

Even after all those years, director Ridley Scott had his work cut out for him. There are very few characters as popular, or as well known as Robin Hood, and for the most part the stories tend toward a glistening view of the past. Few films have offered much in the way of grit or realism, mainly because he’s a romanticized figure, seen more often in tights than in anything practical.

That’s what makes Scott’s adventure interesting, since the director went for a much more grounded story with his Robin Hood, rather than the usual fairytale we’ve seen so many times before.

Russell Crowe stars as our 13th century hero who was fighting with King Richard against the French before the monarch died. Travelling to Nottingham, Robin finds the town has been taken over by a corrupt sheriff, played by Matthew Macfadyen, who is living off the backs of the townspeople thanks to a terrible tax. Falling in love with the widowed Lady Marion, played by Cate Blanchett, Robin Hood takes it upon himself to form a pack of mercenaries to do some good for the poor villagers in an effort to even out the trouble the Sheriff has caused.

While Scott’s Robin Hood can be criticized for not understanding what it means to be “historically accurate,” the film is geared to make Robin Hood grittier than we’ve seen him before, and there is at least some effort made to bring this era in British history alive, even if gets quite a few facts wrong.

This is an action movie though, and it succeeds in making Robin Hood appear like a heroic do-gooder who won’t turn down a fight. The film is just watered down with a story that feels far too much like a Gladiator sequel, than a true Robin Hood film. The gritty style, which worked so well in Gladiator, seems like it was borrowed for Robin Hood, and still falls short in making Robin Hood new again.

To be fair though, Robin Hood is still a decent action film that out-acts, and out-knuckles most of the action films from the rest of the year. Crowe is on auto-pilot here, but he’s still charming, as is Blanchett, and the crew of “Merry Men”. It also needs to be said that even a mediocre Ridley Scott film is still a few notches above the work of your average director.

Sam Mendes’ Academy-Award winning American Beauty arrives on Blu-ray this week, the classic 1990s film that looks at the idea of beauty in suburban America.

Kevin Spacey stars as Lester Burnham, a disillusioned middle-aged man with a failing marriage who’s about to lose his job. Lester’s only answer to the chaos in his life is to let it all go as he dreams of his daughter’s best friend, Angela, played by Mena Suvari, while the rest of the family looks for some kind of answers in their lives.

American Beauty is a rare gem of a film, satirically looking at the troubles of modern ideals while still carrying on as a realistic drama about a family that is essentially about to either fall apart, or find itself.

Highlighting the blu-ray package is a small collection of extra features including a wonderful commentary track by Mendes and screenwriter Alan Ball, plus two other features that look at the cast and the making of the film.

Much like last week, there are a number of television seasons coming out today.

For comedy fans, there’s the fifth season of one of my favorite shows: How I Met Your Mother, plus season four of 30 Rock, season seven of Two and a Half Men, and the first seasons of Community and the Emmy-winning Modern Family.

Dramas on home video this week include the sixth season of Desperate Housewives, the second season of Castle, and the eleventh season of Law & Order Special Victims Unit.

Lastly, the fourth and final season of the Canadian sci-fi series Lexx arrives. In the final season, Stanley and his crew of misfits find themselves near an alternate reality of Earth where Isambard Prince, and his side-kick Priest are scheming once again to control the Lexx. Highlights of this season include a number of the more zany episodes, as when we meet the vampire Vlad, not to mention Nigel Bennett’s performance again as Prince. The series is a definite sci-fi classic, mainly because it’s so off-the-wall and unique, and with all four seasons once again on DVD, sci-fi fanatics should definitely make time to check it out.