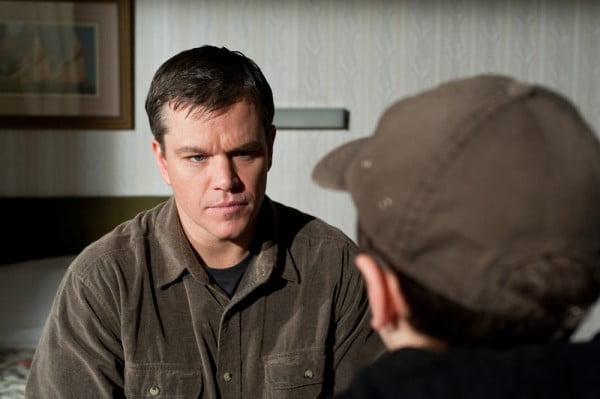 Opening this weekend in theatres: Matt Damon stars in Clint Eastwood’s emotional drama, Hereafter; Bruce Willis plays an aging CIA agent on the run for his life in the action-comedy, Red; plus a look at the drama Conviction, and Johnny Knoxville’s Jackass 3D.

Clint Eastwood has been a busy guy over the last 40 years. Aside from his acting career, the legendary star has directed almost a film each year since 1971, with the largest gap between projects being a mere three years.

Since Unforgiven in 1992, Eastwood has proven himself countless times as a legendary American director, creating classics and Academy Award winners like Million Dollar Baby, Mystic River, and Letters from Iwo Jima.

Now, working with writer Peter Morgan, Eastwood directs an emotional film that looks at life and death, and three people’s experiences with the world beyond.

Matt Damon plays George, what you might call an average work-a-day man who is trying to put his past behind him. Working in a factory, George is trying to get away from his former life where he worked as a psychic, reaching out to speak to the dead. For George though, the problem is that people still come to him, asking for his help, and the mere act of touching a person’s hand connects him to the spirits in a person’s life.

On the other side of the globe, a French journalist named Marie, played by Cécile De France, has a near-death experience that leaves her with clear memories of the world beyond her life, while a young boy, played by Frankie McLaren, deals with death in his family.

Told as three separate, but converging stories, Eastwood directs this stunning cast with wit and pure skill. Damon might be the weakest of the group, but he’s still a vital and engaging lead as this simple man looking for a simple life.

Cécile De France was my favorite part of the film, however, as she’s simply wonderful as this journalist who is slowly losing her way to secrets she wants to discover in her soul.

While I did find Hereafter slightly loose, with an ending that I didn’t feel really gave the story a powerful enough conclusion, the film was nonetheless riveting and moving. It treaded lightly on a lot of topics that deserved greater breadth, but it paints a vivid portrait of three characters that are well worth getting to know.

Earning some of the best reviews of the week, Red is certainly one of the falls more hotly anticipated action films, especially since it has serious tongue-in-cheek appeal.

As Roger Moore wrote for the Orlando Sentinel, “Red has enough acting flourishes and incidental action pleasures to make it an adrenalin-jacked giggle, if not exactly the romp one so fervently expects.”

While Robert Wilonsky of the Village Voice summed the film up a bit more simply: “Classiest. Comic. Book. Movie. Ever.”

Oscar winner Hilary Swank stars as Betty Anne Waters, the real-life woman who spent 18 years to free her brother from prison for a crime she believed he never committed.

Going through her brothers case for nearly two decades, Betty Anne’s story is a dramatic tale of one woman who would not give up on hope for her older brother Kenny, played in the film by Sam Rockwell.

While the film has not been wowing critics, it has earned a decent level of praise and positive reviews.

Critic Cole Smithey writes for his website, “Tony Goldwyn’s deceptively rote telling of one woman’s 18-year effort to exonerate and free her brother from prison for a murder he didn’t commit, packs more of an emotional punch than expected.”

Once again, Knoxville and a fresh crew of wisecracking daredevils pull out all the stops as they create some of the craziest stunts you could ever imagine.

If you’re a fan, clearly this will be your number one film for the weekend. As for the rest of us, it’s safe to bet you can catch this one on cable, or simply ignore it altogether.