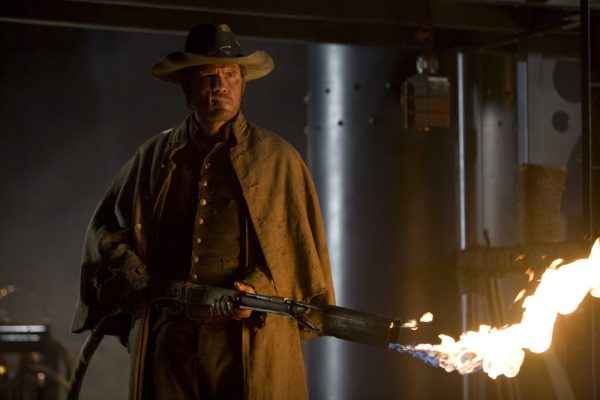 New releases this week on DVD and Blu-ray: Josh Brolin takes on a ruthless terrorist in the wild west comic book adaptation of Jonah Hex; Adrien Brody and Sarah Polley play with science in the horror film Splice; plus a look at How to Train Your Dragon and the Robocop Trilogy on Blu-ray.

Taking a page from the abhorrent Wild, Wild West, Jonah Hex is set in an alternate-reality America where these average men can get their hands on strange technology that puts most modern weapons to shame. That’s not such a bad thing though, as it gives the film a level of cool that works in its favour. As a popcorn film that’s a must, but the film needed more than just cool ideas. It needed a better script.

Taking a mere five minutes to build the character’s back story, Jonah Hex at least starts off with a bang before it falters into a lame subplot about some really old-school terrorists who still harbour a grudge after the South lost the American revolution. That concept feels incredibly cheap the way it plays out, and Malkovich’s villainy is more of the same for an actor who has fallen into a groove that is getting really old.

All of that said, I liked parts of Jonah Hex. It’s a bad film wrapped around a character that Brolin does a decent job of realizing, despite the faults of the script and direction. This is a popcorn film that satisfies most of the blockbuster requirements, but fails to be much more than a film people will watch late at night before they forget it again the next day.

For me, Jonah Hex is most notable because it’s another example of how badly DC comic book characters are generally rendered. Hopefully they can turn that around at some point and maybe revisit this character who deserves at least one more shot, even if it is just between the eyes.

Starring Adrien Brody and Sarah Polley, the film received big praise from critics when it debuted in theatres, including from writer Lisa Schwarzbaum from Entertainment Weekly.

Featuring the voice work of America Ferrera, Craig Ferguson, Jonah Hill, David Tennant, and Kristen Wiig, How to Train Your Dragon is a top-notch film whether you have kids or not.

In a future that may not be that far away, Detroit is a battle ground for gangs, drug lords, and the few weary cops trying to make the peace. As the city tries to fight back, the mega corporation OCP steps in with their latest creation: a cyborg with the guts of a cop, but the weaponry of a robot.

Robocop is a classic eighties action movie that pretty much helped define the decade, and although the sequels were not quite as classic, the trilogy is worth a look whether you saw the films the first time around or not.

As the good man says, “I’d buy that for a dollar!”

The only flaw with the Blu-ray set is that the first film comes out looking the most ragged, while the two sequels manage to look marginally better in the transfer. Unlike the previous DVD release a few years ago, the Blu-ray package also comes with no features at all, so if you’re picking up the trilogy, you’re doing it strictly for the films themselves.