Film Friday: ‘Due Date’ and ‘Megamind’ 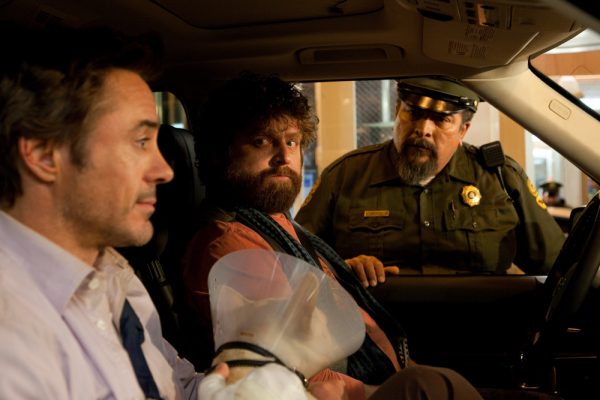 Robert Downey Jr. and Zach Galifianakis in Due Date

New this week at a theatre near you: Robert Downey Jr. and Zach Galifianakis star in the odd-couple comedy, Due Date; Will Ferrell plays the winningly bad bad-guy in the animated comedy, Megamind; and a look at the political thriller, Fair Game, starring Naomi Watts.

Between director Todd Phillips, and stars Robert Downey Jr. and Zach Galifianakis, Due Date must have seemed like a great idea to studio executives hoping for a mid-fall hit comedy.

Thanks to The Hangover, Phillips has earned some big respect from fans and Hollywood alike, but I’m frankly not convinced that he can keep the laughs rolling. In fact, I’d say the same thing about Galifianakis, who has a shtick that’s about as funny as a 10-minute long Saturday Night Live skit.

On the bright side though, there is Robert Downye Jr. Downey who stars as Peter, the father-to-be who finds himself stranded on the other side of the country with only one option to get home in time for his child’s birth: the zany, wanna-be actor, Ethan, played by Galifianakis.

Embarking on an epic road trip, the obvious odd couple fight it out and try to make friends as they experience all kinds of mayhem along the way, and bond at the same time.

Due Date hasn’t been hammered by critics, but it’s certainly getting the kind of reaction you would expect for a movie with such a flimsy premise.

Even Peter Howell of the Toronto Star, who gave the film some praise, points out what might be the only draw to seeing Due Date: “Watching Downey’s vein-popping discomfiture in the company of Galifianakis is the best and possibly only reason for seeing the film.”

While Rick Groen of the Globe and Mail wrote, “Under the nuanced direction of John Hughes, Candy made annoying seem hilarious and his broad girth endearing. As amped up by director Todd Phillips, Galifianakis makes annoying seem annoying.”

DreamWorks Animation has been waging a long battle to become one of the most successful animation houses of the last two decades, but they have some stiff competition.

Since Pixar is pretty much the undisputed champion of the animated world, it’s at least safe to say DreamWorks is waging a valiant war, but they have also made indisputably unique comedies that have become instantly endearing.

Whether you’re talking about Shrek, How to Train Your Dragon, or Kung Fu Panda, there have been some great movies from the studio over the years, and Megamind follows acceptably on that course.

The story follows the super-villain Megamind, voiced by Will Ferrell, who has continually failed to be all that he can be. He’s tried to take over the thriving Metro City with countless schemes, but the superhero Metro Man has always thwarted him… until one wildly botched plot actually works.

With Metro Man throwing in his cape, Megamind seems to be the conqueror, until a new villain shows up, and it’s up to the villain to become the city’s new hero.

Megamind has failed to ignite the imaginations of critics, but it has received some solid reviews all the same, and looks poised to do some big business this weekend with families and tweenage youngsters.

“What this raucous 3D animated fun house lacks in originality (think bastard child of The Incredibles and Despicable Me) it makes up for in visual and vocal wit,” wrote Peter Travers for Rolling Stone.

Claudia Puig of USA Today points out the film’s biggest flaw though, writing in her review, “Megamind has some funny moments, silly mispronunciations and comical socio-political references. But it suffers from being the second animated movie this year to feature a dastardly villain for a hero.”

Lastly, with the best reviews of this week’s three big films, director Doug Liman leads this political thriller about real-life covert CIA agent Valerie Plame Wilson, played by Naomi Watts, who finds her identity revealed by the White House in a move meant to discredit her ambassador husband, played by Sean Penn.

The international affair plays out over a spry 108 minutes, and tells Wilson’s story which was sparked by an op-ed Wilson wrote for The New York Times on investigations into weapons of mass destruction that the Bush administration claimed were being held in Iraq prior to the 2003 invasion.

And Elizabeth Weitzman of the New York Daily News wrote, “Though based on a true story with a well-known outcome, Doug Liman’s “Fair Game” is as suspenseful as any fictional thriller — and considerably more tragic.”