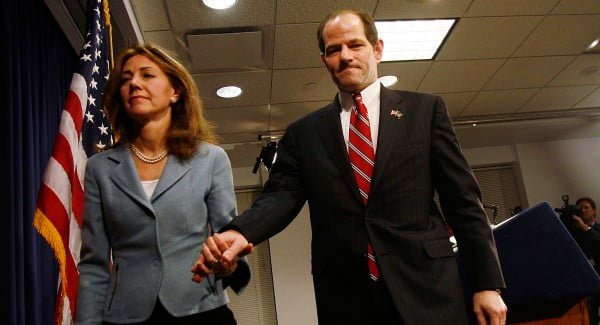 Available today on DVD and Blu-ray: director Alex Gibney explores the rise and fall of New York governor Eliot Spitzer in Client 9; Chloe Moretz and Kodi Smit-McPhee star in the horror remake, Let Me In; two people try to survive an alien wasteland on Earth in the drama, Monsters; plus a look at Never Let Me Go, starring Carey Mulligan, Keira Knightley, and Andrew Garfield.

Former New York Governor Eliot Spitzer has lived a story that is akin to a modern day fairy tale, told across a number of years as the once bull dog-like political hero rose to power before he would eventually fall into murky disgrace.

In director Alex Gibney’s expansive documentary, Spitzer’s story is explored to the fullest and retold by many of the people who were such key players in the morality tale, with many appearing for the first time since the events unfolded.

Looking back at Spitzer’s early days in office, when he was known as “The Sheriff of Wall Street,” Gibney tracks all of the factors that would play a part in the governor’s grand story, including his virulent attacks on Wall Street’s most vile practices, and his foray into the arms of the prostitutes that would eventually be his downfall.

The point of Gibney’s film isn’t the morality of Spitzer’s crimes though; Client 9 is more purposefully aimed at Wall Street, and the threat that they saw in Spitzer’s legal actions to bring down criminal CEOs who were ruining the financial markets and hurting consumers. As the documentary shows us, Spitzer’s fall from grace was also perfectly timed with the crash of the American financial markets, which ended up causing problems across the world’s economy.

What makes Client 9 so compelling is Gibney’s cleverly woven mix of interviews, facts, and news clips that reveals so many details about Spitzer’s work, and the CEOs he was fighting to bring under the law. Although we have to decide who is right and wrong ultimately, it seems clear that Spitzer’s career was derailed because he was causing issues for people with money and influence.

Included on the DVD for Client 9 is a commentary track and an interview with writer and director Alex Gibney, plus deleted and extended scenes.

What he slowly comes to realize though is that Abby is not like every other girl. Something is seriously strange about the eerily reclusive girl and her father, who constantly seems agitated and upset, and Owen can hear him screaming at her through the walls.

Directed and written by Matt Reeves, who also directed Cloverfield, Let Me In is a dense, vivid, and intelligent drama with heart and horror. The performances by Moretz and Smit-McPhee are brilliant, especially for such young actors in dark territory, and they have a wonderful chemistry. They make this tough material work brilliantly, and Reeves directs them and amps up the drama at every turn of the chilling script.

Let Me In proves to be a well-acted, driven film that bleeds and moves, motivated by its characters. As a drama, it’s well worth seeing, and as a horror film it is truly inspiring to see an American-ized remake that actually resonates and maintains the original’s charm and intelligence.

Titles, and trailers, are a lot more important than most people realize, and a film like Gareth Edwards’ “Monsters” abundantly proves that.

Gareth Edwards’ movie certainly has style, interesting characters, and a lot more going for it, but for a movie with a title like “Monsters,” there sure aren’t a lot in sight.

Sure, there are giant octopus-like creatures roaming parts of the United States and Mexico, and I think Edwards wants you to see them as monstrous at times, but they’re spotted so infrequently, it’s hard to even imagine them as the stars of the film.

Instead, Monsters is about two people, thrust together and trying to get across an area known as the Infected Zone, where alien life has sprung up following a NASA disaster some six years ago.

Andrew, played by Scoot McNairy, is a young photographer hoping for his chance to get photos of some of the numerous creatures that are roaming the Infected Zone and outside parts of Mexico. Andrew has to take a time-out from his job when the owner of his publication sends the photographer off to take care of the mogul’s daughter Sam, played by Whitney Able, who was injured in a recent attack by the creatures as she vacationed in Mexico.

With a kind of migratory season about to push the alien creatures through a major portion of Mexico, Andrew needs to escort Sam to a nearby port where she can catch a ferry back to civilized America, but through a serious of problems the duo are forced to walk the wilds of the Infected Zone. That leaves them cozying up to each other as they try to survive the desolation left behind by the alien creatures.

Inviting obvious comparisons to films like Cloverfield and District 9, Monsters is a solidly built movie that feels like a thriller early on, but fizzles into a strained drama by the time it ends. It also doesn’t help that if you’ve seen the film’s trailers, you’re probably expecting something far more thrilling than this aimlessly lukewarm story about people wandering around together in a hellish landscape.

Had the trailer not been so misleading, I probably could have forgiven the film, but that doesn’t change the fact that Monsters just doesn’t deliver a strong or moving story.

Set in the English countryside in what could be decades past, or maybe yesterday, Never Let Me Go follows three young friends at a special private school where the children are being raised for a unique purpose that is not very clear early on.

Powered by wonderful performances from the entire cast, both old and young, and with music, pacing, and cinematography that adds mood to the film’s emotional story, Never Let Me Go is a frequently moving tale that falls just short of perfection. In fact, the film’s greatest flaw is that it deals well in building mood and mystery, and Mulligan shines in this heartfelt and tragic story, but the film anaesthetizes the story’s weight and poignancy. As a viewer it’s hard to watch these humans act like their lives are predestined to end so early without wondering why they don’t try to run away, or fight the injustice of their society. Why are they so different? How can they be emotional for each other, and yet be detached from their own lives?