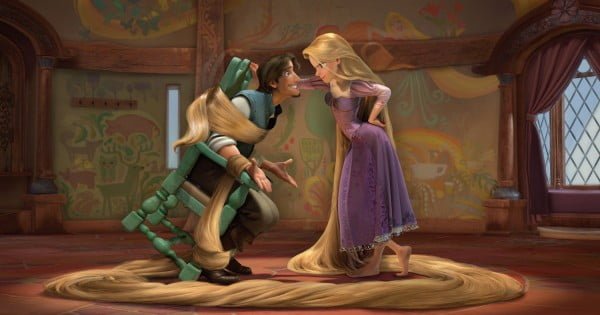 A scene from Disney's Tangled

Disney has been having a pretty fantastic run over the last three or four years. While Pixar has been a boon to the animation super-power, Disney has slowly been proving itself once again with legitimate big-screen animated success stories like 2009’s The Princess and the Frog.

The latest hit to come out of the House of Mouse is Tangled, the reimagining of the German fairy tale, Rapunzel, which takes a slightly different spin on the classic.

In this fantastic, romantic adventure, Mandy Moore voices Rapunzel, a feisty long-haired princess who is trapped inside a tower where she has lived alone for almost all of her young life. Although we know the truth, Rapunzel doesn’t realize that she’s actually a princess who was stolen from the reigning King and Queen because she possesses the magical ability to heal and reverse old age. Rapunzel’s “mother” Gothel, voiced by Donna Murphy, is actually the witch who stole the princess and is now keeping her captive in the remote, hidden tower so she can always stay young and vibrant.

When the charming bandit Flynn, voiced by Zachary Levi, shows up in her tower by accident, Rapunzel finds her first chance to leave and explore the world for the first time. In exchange for Flynn’s stolen bounty from the castle, which Rapunzel hides in the tower, she asks the bandit to take her to see the annual release of the flying lanterns, which just happens to coincide with her birthday.

Tangled is a lively joyride that has witty banter, clever characters, and an outlook on life that feels fresh, even though it’s based on a very old story. The film is also notable because it marks Disney’s 50th animated feature length film, which is a tribute to the studio’s success and the fact that they are still unrivalled in the animated movie industry. Tangled may not be as great as the Lion King, but it’s still one of the studio’s better releases, and a must-see for families and fans of the genre.

Between the wonderful voice work by Levi, Moore, and Murphy, not to mention all of the supporting cast, and the spellbinding story and visuals, Tangled is heartfelt to its core, and very charming. The film could have a deeper story, and it does follow a tell-tale storyline from the very beginning, but it’s anything but by-the-numbers.

The Tangled Blu-ray package has a good collection of extras for Disney fans and younger viewers. Aside from the deleted scenes, there are also two versions of the film’s original storybook opening, extended songs, a great making-of feature called Untangled: The Making of a Fairy Tale, and a short but fantastic segment that shows a clip of all fifty of Disney’s animated feature films in 2 minutes. (For long-time Disney fans, I would dare you to try to name all fifty films. Most of the latest films are pretty easy to name, but I expect you will have a much harder time with a few of the earliest releases.)

On a much darker note this week is Darren Aronofsky’s modern fairy-tale-turned-nightmare Black Swan, starring Oscar-winner Natalie Portman as Nina, a competitive New York City ballet dancer wrestling with conflicts between herself, her mother, and her career.

Nina is a powerful dancer who is obsessed with dancing, but she lives in the shadow of her mother Erica, played by Barbara Hershey, who has high ambitions for her daughter. For the sake of her career Nina has become anorexic, which she hides from her mother, but at the same time Nina has developed a nervous habit of scratching herself, which Erica has been vigilant against since her daughter was a child.

As the company’s artistic director, played by Vincent Cassel, decides to replace their star ballerina Beth, played by Winona Ryder, Nina finds herself warring with a new dancer in the troop, played by Mila Kunis, as she tries to prepare for the challenges of Swan Lake where she must play both sides of her psyche. On the one hand she will have to play the pure and innocent White Swan, followed by the sensuality and darkness of the Black Swan. Accomplishing this role, however, may finally break the fragile dancer.

Proving his skills as a director, Aronofsky invests Black Swan with deep, dark, and sometimes disturbing emotions, and the camera work is powerful and almost threatening at times. With impeccable art direction, costumes, and acting, Black Swan is another impressive work from Aronofsky, but perhaps not quite the master work that we saw in his last Academy Award nominated film The Wrestler.

The reason Black Swan doesn’t leave a strong impression is that it simply is not as great or as powerful a story. While I’m rating the film quite highly, that is mostly because the acting, directing, and art direction are superb. If the story had been more engaging, moving, and cohesive, this could have been a perfect film. Black Swan is simply too forced to prove itself as a serious film–it’s far more appropriate to call it some cross-section of a melodramatic noir horror film, which is frankly hard to take all that seriously at times.

Stanley Kubrick and Arthur C. Clarke’s classic science fiction film first came to Blu-ray back in 2007, and it was instantly crowned as one of the best Blu-ray releases on the market. After four years, the film is still one of the best Blu-ray releases out there, and if you missed it the first time you can now pick it up in Warner Bros’ Steel Book edition, which simply repackages the release in a sturdier case.

Kubrick’s 2001 is a monumental film whether you’re talking about sci-fi, or filmmaking in general. As a science fiction film, 2001 features some of the most advanced, realistic-looking special effects ever put on film–effects that quite simply outshine all but a few of the best digital effects ever produced.

When Kubrick sends us into space, it feels like we’re traveling through the solar system, stepping on the moon, and inhabiting at least one version of what the future could have been. At the same time, 2001 is an audacious, intelligent drama about humanity and evolution, and it’s also tensely wrought from the moment we glimpse the early days of Earth.

Almost as importantly, the film was co-written by Clarke, one of the grandfathers of modern science fiction, and between Clarke and Kubrick the two were able to craft a future that was not only plausible, it also just looks and feels right, even all these years after 2001 has come and gone again.

The film is potent, and by any standard one of the greatest films ever made, delving into humanity’s dreams of exploration, and reaching distant, unknowable planets, but it’s also–at least at times–like watching someone else’s dream. The story is visceral, and yet ethereal in many ways. Where many films give you a story to inhabit, 2001 turns the viewer into a sentient spirit traveling through time on an unknowable journey.

Adding to the value of the Blu-ray, if the film wasn’t enough on its own, are a series of brilliant special features. There’s a commentary with stars Keir Dullea and Gary Lockwood, plus numerous documentaries that look at the making of the film itself, Kubrick’s vision as a director, an interview with Kubrick from 1966, a look at the visual effects and concept art, and a feature on the technology in the film and whether Kubrick’s vision was accurate, just to name a few.

Fans of Pitch Black and the sequel The Chronicles of Riddick can now pick up both films on Blu-ray together in the Riddick Collection, and as a special little bonus the films are being packaged with the animated Dark Fury sequel on DVD.

The sci-fi action films star Vin Diesel as a former criminal who somehow usually ends up doing the right thing. In Pitch Black he’s trying to survive a planet inhabited by alien critters that just want to devour any living thing they can find, and in The Chronicles of Riddick our anti-hero is facing off against a totalitarian religious force that is conquering planets and killing anyone who stands in their way. The best part of the sequel is definitely the cast, which co-stars the likes of Dame Judi Dench, Thandie Newton, Colm Feore, and Karl urban, not to mention the powerhouse special effects. In addition, the Dark Fury animated sequel fills in the action after the events of Pitch Black, picking up there in telling a bit more of Riddick’s story.

For Riddick fans who don’t already own any of the films this is a great package, and the movies look fantastic on Blu-ray. The catch is that this package really just combines the discs from the previous single Blu-ray releases and adds in the animated DVD. In other words, if you own one or both of the Blu-ray releases, it may not be worth buying the collection. If you’re like me though, and you’ve never owned the Riddick films before, this is a solid action collection, and the features are worth a look, especially on the Chronicles of Riddick disc.