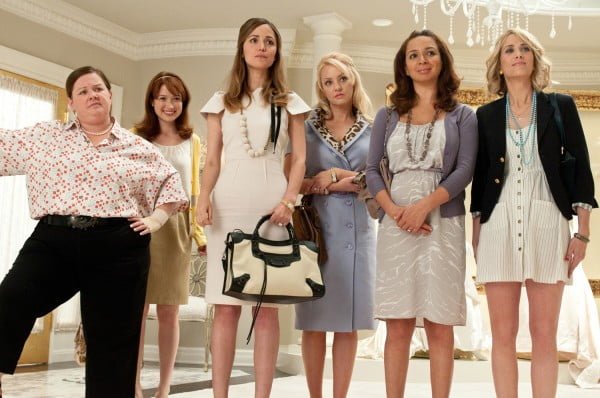 In what might one of the few examples that you really can’t judge a film by its trailer, Bridesmaids is miraculously one of the best reviewed comedies to come out so far this year, and it was directed by the relatively untested Paul Feig.

Co-starring Maya Rudolph as Annie’s best friend Lillian, plus Rose Byrne, Melissa McCarthy, Wendi McLendon-Covey and Ellie Kemper, Bridesmaids is a surprising hit among critics, and a rare film that gives women the chance to behave a little badly on screen.

And Christy Lemire of the Associated Press wrote, “Bridesmaids surely doesn’t mark the end of conventional female-centric comedies, but it works on so many levels, it’ll hopefully make future filmmakers stop and think twice before approaching this kind of project and realize it can be done [better].”

At press time, Bridesmaids had earned 90% fresh on RottenTomatoes.com, a rare accomplishment for what I might otherwise call a dumb-looking film. Clearly the film needed a better trailer, but it’s set to be this week’s big opening film if it can just overcome last week’s dominate actioner, Thor.

As a director though, Stewart has so far failed to do much more than irritate critics, whether you’re talking about his dud Legion, or his latest sci-fi offering, the big screen adaptation of Priest.

Based on the fact that distributor Screen Gems decided not to offer the film for review to the press, it’s clear this is a film you can save for television or DVD, but there are a few reviews from the United Kingdom press.

Tim Robey of the U.K.’s Daily Telegraph wrote, “Clawing away under its 3D dinge and slick but desensitising effects, the movie is deadly, even when it’s cool – a comic-book adaptation ruthlessly shorn of the word “comic”.

Tom Huddleston of Time Out probably said it best though when he wrote, “Did Paul Bettany know, when he donned the cowl of the albino monk in ‘The Da Vinci Code’, that he would soon be typecast as Hollywood’s go-to guy for God-bothering multiplex action movies?”

May 20
Last Night
Pirates Of The Caribbean: On Stranger Tides

May 26
Kung Fu Panda: The Kaboom of Doom
The Hangover 2